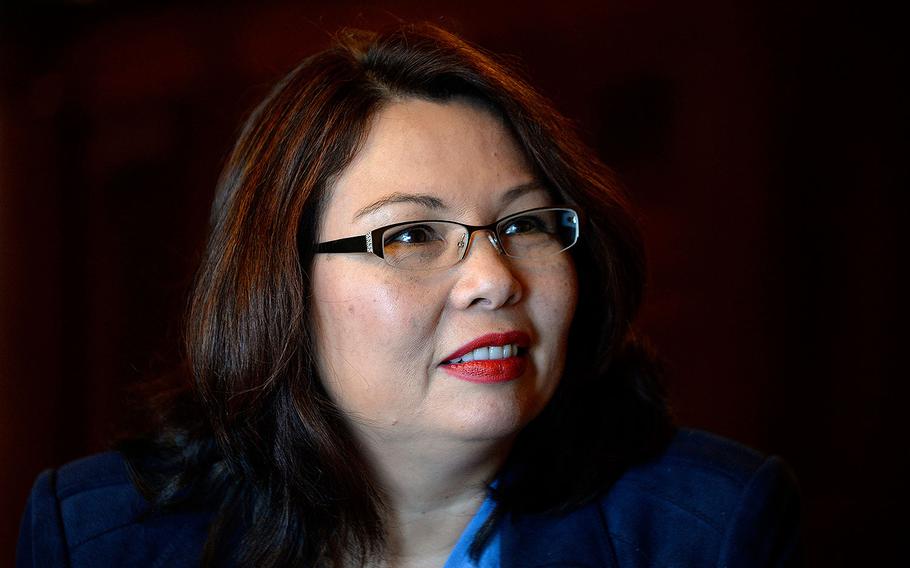 WASHINGTON — A senator who served in Iraq has asked Defense Secretary Jim Mattis to assess the impact President Donald Trump’s alleged sharing of highly classified information with Russian leaders could have on the ongoing fight against the Islamic State.

Sen. Tammy Duckworth, D-Ill., wrote in a letter sent Wednesday to the Pentagon chief that she was “deeply concerned” about Trump’s recent actions, including his firing of FBI Director James Comey and reports that he shared highly sensitive information about ISIS with Russian diplomats during a meeting last week in the Oval Office.

“I believe this incident is yet another in a string of alarming actions by the administration that raise strategic concerns about our nation’s commitment to democracy, our North Atlantic Treaty Organization (NATO) allies and our credibility across the globe,” Duckworth wrote.

The senator, a former Army helicopter pilot who lost both her legs in a 2004 rocket-propelled grenade attack in Iraq, asked Mattis to provide her an “impact assessment” of damage that Trump’s relay of sensitive information to a major adversary could do to allies’ confidence in sharing secrets with the U.S. government.

She additionally asked Mattis to assess the state of U.S.-Russian relations, the U.S. military’s strategy to confront Russian aggression in Eastern Europe and Syria, and the impact that Trump’s action could have on NATO.

The Pentagon received the letter, said Laura Seal, a Defense Department spokeswoman. Seal said the department would provide a response directly to Duckworth.

In just more than a week, Trump fired Comey, who was leading an FBI investigation into possible ties between Trump’s presidential campaign and Russia, and shared with the Russian diplomats code-word information – material even more closely guarded than top-secret information – provided by a partner nation spying on ISIS. It was later reported the partner nation was Israel.

The White House and the Kremlin have denied any inappropriate information was shared during Trump’s meeting with Russian Foreign Minister Sergey Lavrov and its ambassador to the United States Sergey Kislyak. Mattis also played down any concerns that he might have about the incident, telling reporters that he was aware of the reports and was “not worried.”

Mattis told reporters at the Pentagon on Wednesday that he had not heard from any allies, including Israel, who raised concerns about the reports.

“We always have safeguarded information from our allies and there’s nothing that has caused them to question it,” Mattis said. “…We’ve received no questions at all from anyone.”

Mattis is expected to face reporters Friday afternoon in a news conference at the Pentagon centered on the anti-ISIS campaign and he is likely to be asked about Trump’s recent actions.

During his confirmation hearing before the Senate Armed Services Committee in January, Mattis assessed Russian aggression as the predominant security threat facing the United States.

Nonetheless, Trump has repeatedly called for closer relations between the two nations, including in the fight against ISIS in Syria where both countries have a military presence. While U.S. forces have almost entirely focused operations in Syria on ISIS, the Russians have largely worked to prop up President Bashar Assad’s regime, attacking ISIS only occasionally.

The United States and Russia regularly communicate to avoid mishaps in their operations in the air over Syria. But U.S. law prohibits the American military from working hand-in-hand with Russian forces as a response to Moscow’s 2014 annexation of Crimea and subsequent support for separatists in eastern Ukraine.

In her letter, Duckworth also raised questions about how Mattis and other national security leaders have on several occasions contradicted statements made by Trump, including Mattis’ declaration in February that the United States was not in Iraq to seize oil. Trump previously suggested American troops should seize Iraqi oil as “spoils” of war. Mattis and Trump also have disagreed on the use of torture and the value of NATO. However, Trump has since conceded NATO is necessary.

“The frequency with which you and other members of the Trump administration’s national security team have been forced to contradict the commander in chief is highly alarming,” Duckworth wrote. “I am concerned that this bizarre practice may gradually degrade our nation’s credibility and standing in the world.”