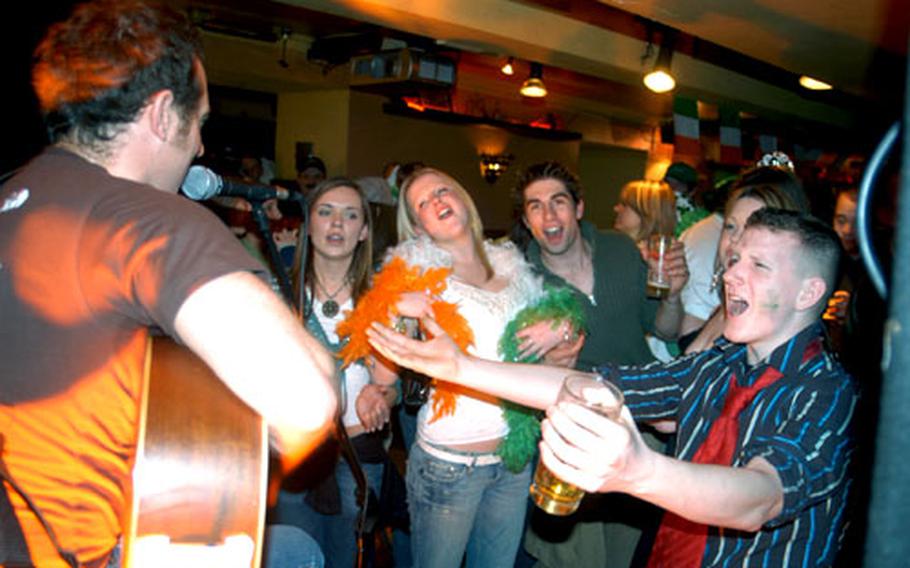 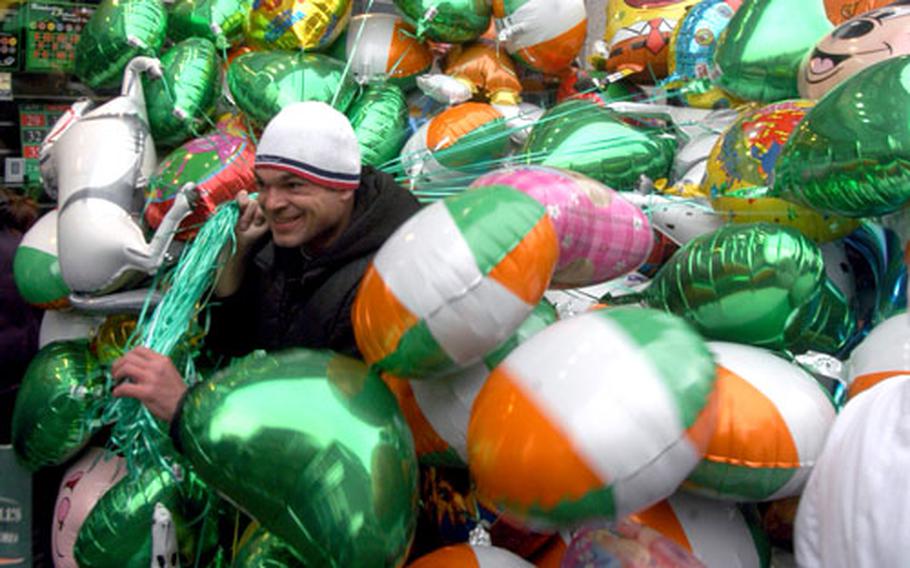 A balloon vendor makes his way down O’Connell Street prior to the St. Patrick’s Day parade in Dublin. (Sean Kimmons / S&S) 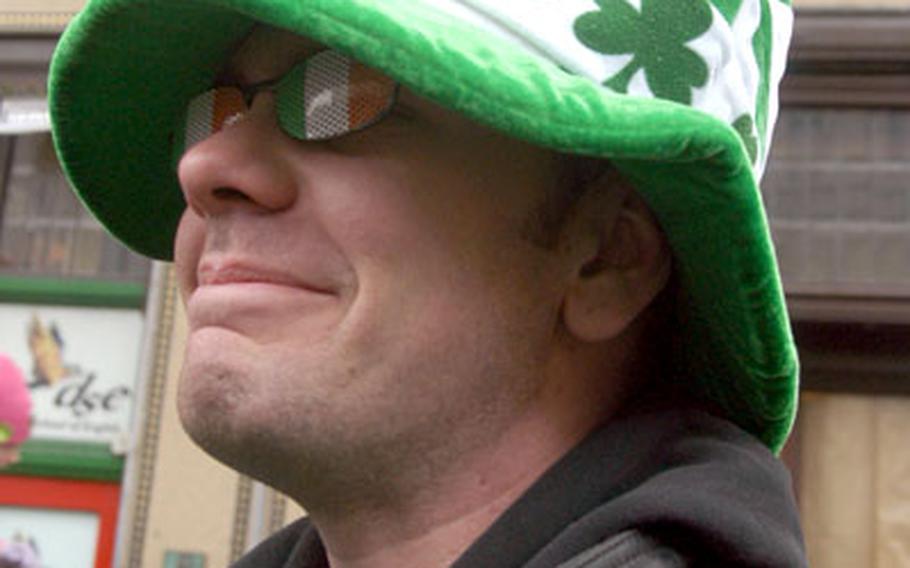 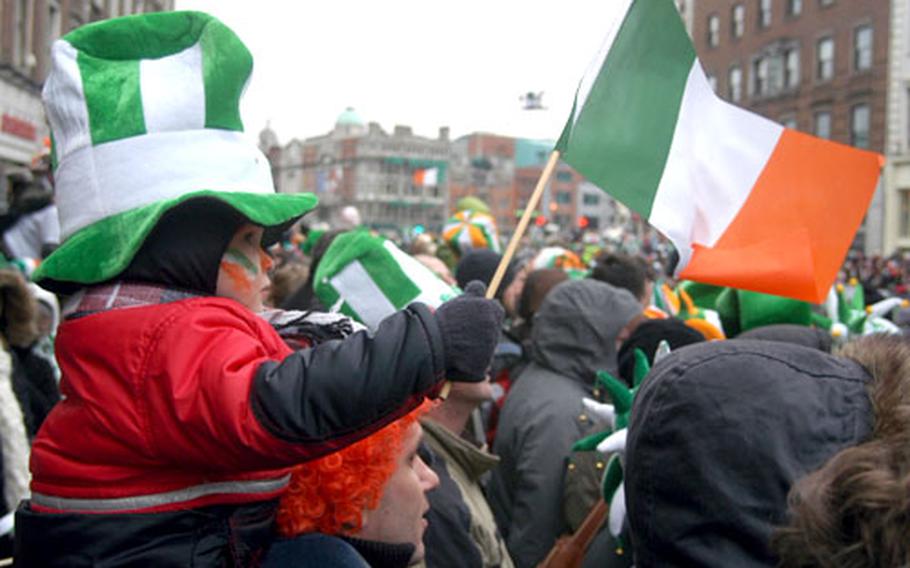 Arsneiy Tarkovskiy, 3, from Ukraine, waves an Irish flag while sitting on his father’s shoulders during the St. Patrick’s Day parade in Dublin. (Sean Kimmons / S&S) 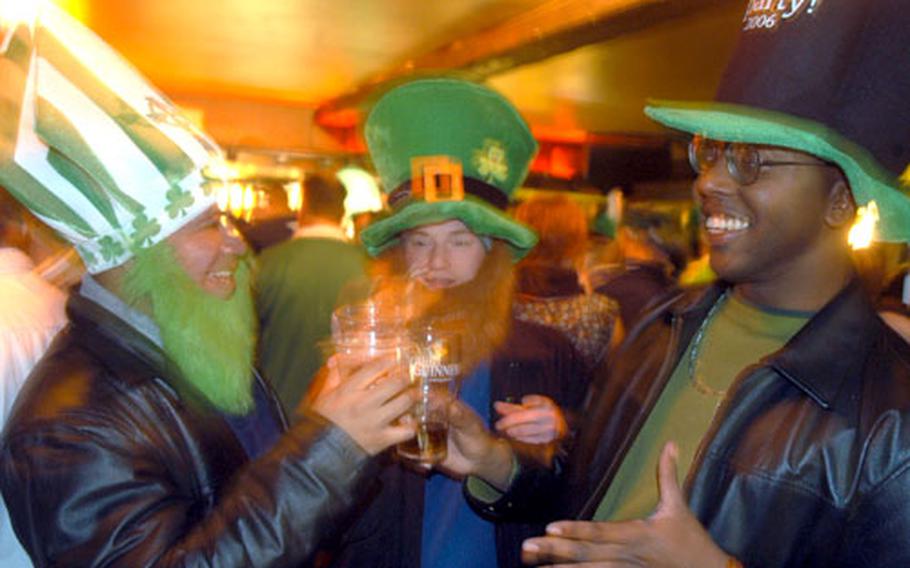 Decked out in Irish costumes, from left, Senior Airman Ruben Olivas, Staff Sgt. Bill Branham and Staff Sgt. Brian Lee, all based out of RAF Mildenhall, make a toast while enjoying Guinness at a pub in Dublin. (Sean Kimmons / S&S)

DUBLIN, Ireland &mdash; When mentioning large-scale parties around the world, St. Patrick&rsquo;s Day in Dublin is one not to be left out.

So, when I heard that the Information, Tickets and Travel office was sponsoring a trip to the Green Isle&rsquo;s capital city during the Irish holiday, I quickly signed up.

More than 60 other vacationers, many of them U.S. Air Force personnel and dependents, were on the four-day tour. They came to party in honor of Ireland&rsquo;s patron saint, who also is credited with driving snakes from the island. St. Patrick is believed to have died on March 17 in the year 461. The day long ago was marked as a holiday in his honor.

Besides the annual St. Patrick&rsquo;s Day trip, ITT also offers Dublin trips in the summer and fall at the same price of 249 pounds. Below is a log of how last weekend&rsquo;s trip played out.

Day oneIt&rsquo;s a little past 5 a.m. and our tour bus rolls out of RAF Lakenheath to embark on a 12-hour bus journey through England and Wales and a ferry ride to Dublin.

Along the way and throughout the rest of the trip, our tour guide, Gordon Bligh, and bus driver, Charles &ldquo;Chick&rdquo; Henderson, from Sunfun International, share tidbits of knowledge and an occasional joke.

Upon arriving at our hotel in Dublin, we are greeted with chilly wind gusts that keep us off-balance as we exit the bus. After some time to unwind, those looking for a traditional Irish evening jump on the bus again to partake in a night of folk dancing, Irish ballads and dinner. Others do their own thing or hit downtown Dublin, as a pre-game to the next day&rsquo;s chaos.

Day two (St. Patrick&rsquo;s Day)In the morning, we are transported to Dublin&rsquo;s city center for the parade. Thousands of people dressed in Irish costumes and decorations converge along O&rsquo;Connell Street, the main parade route.

After downing a few pints with a group of airmen at a nearby restaurant named &ldquo;Bad Ass Cafe,&rdquo; named for its obsession with jackasses, we head to the parade where elaborate floats and formations of bands slowly pass by. Because of the enormous crowd, we have to position our cameras over spectators to catch a decent shot of the parade.

Following the parade, many of the spectators pile into nearby pubs to kick off an early afternoon party that doesn&rsquo;t stop for another 14 hours.

After inching our way past joyous and tipsy pubgoers, we stake our claim at a corner table inside O&rsquo;Sullivan&rsquo;s pub. The pub rapidly transforms into a melting pot, as visitors from Australia, Canada, England, France, Germany and Poland celebrate with us.

Everyone is Irish today, and we all share in the spirit of St. Patrick&rsquo;s Day with pints of Guinness and Irish adornments. We eventually leave the downtown area, but after some rest and a bite to eat, we hit the pubs again for an all-nighter.

Day ThreeThose who didn&rsquo;t need to recuperate from the other night had the option to take a tour of Dublin with a local guide.

A highlight for many on this day was the Guinness Brewery Storehouse tour following the Dublin tour. Standing seven floors high, the brewery is like the Willy Wonka factory for adults. It was easy to kill a few hours at the brewery&rsquo;s educational stations and its bars offering fresh pints of Guinness and live bands.

Day FourAs a change of scenery for the return home, the Scottish bus driver, &ldquo;Chick,&rdquo; drove us through the Welsh mountain region of Snowdonia. Snow-capped mountains and sheep grazing on green pastures helped cap off the journey.

Additional four-day Dublin tours are scheduled to begin June 23, July 6 and Sept. 8 and cost 249 pounds. Those traveling alone will be charged a single supplement for an extra 90 pounds. For more information on other Sunfun International trips, go to www.sunfuninternational.com or head to your local ITT office.