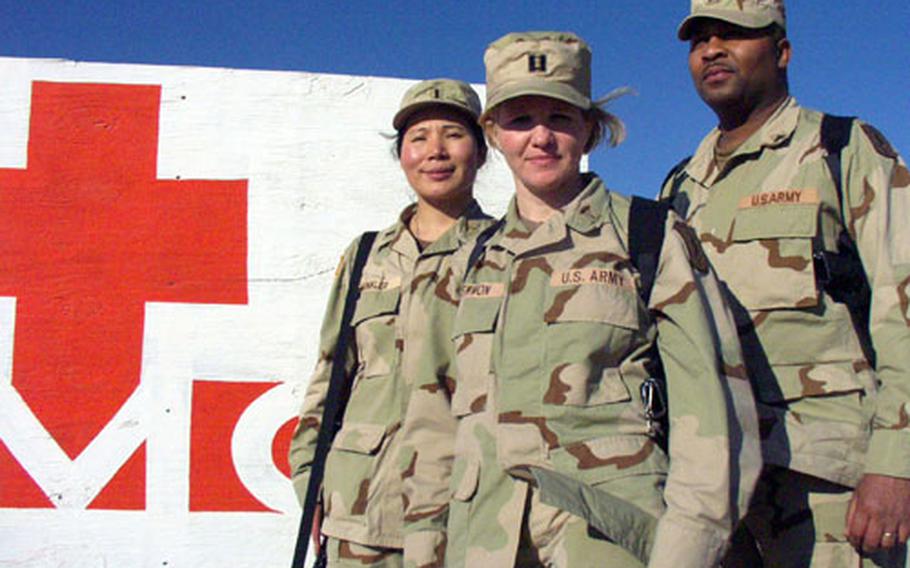 From left, 1st Lt. Kyong Winkler, Capt. Michelle Stewmon and Sgt. Dexter Harris are nurses with the Würzburg, Germany-based 67th Combat Support Hospital, which recently deployed to Iraq for a year. All three said goodbye to active-duty spouses who had just returned from yearlong Iraq tours. In Europe, dual-military deployments are hitting hardest this year in the Würzburg area. (Steve Liewer / S&S)

From left, 1st Lt. Kyong Winkler, Capt. Michelle Stewmon and Sgt. Dexter Harris are nurses with the Würzburg, Germany-based 67th Combat Support Hospital, which recently deployed to Iraq for a year. All three said goodbye to active-duty spouses who had just returned from yearlong Iraq tours. In Europe, dual-military deployments are hitting hardest this year in the Würzburg area. (Steve Liewer / S&S) 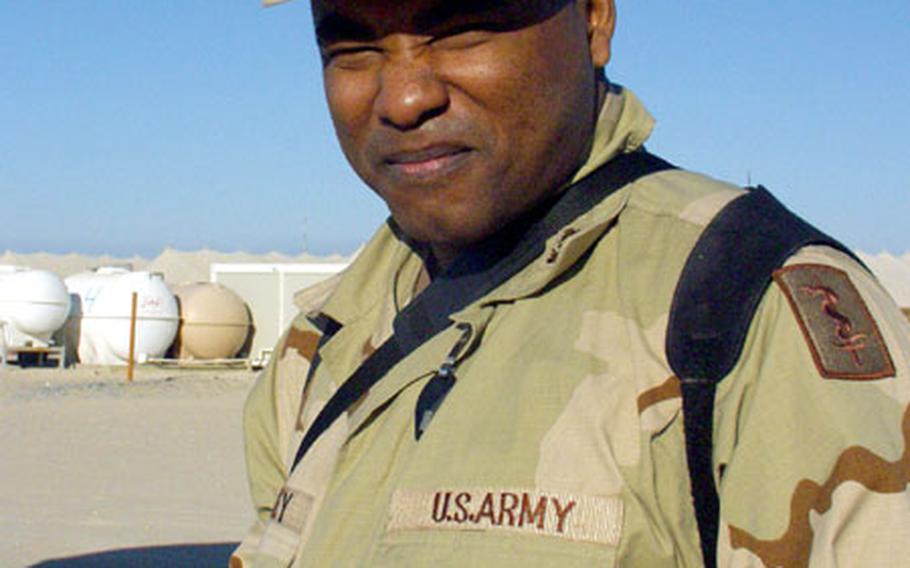 CAMP UDAIRI, Kuwait &#8212; For Nicholas, Erika and Logan Stewmon, seeing Mom and Dad both home together is getting to be a very strange thing.

The three children, ages 14, 12 and 5, belong to a dual-military family in Illesheim, Germany. Their father, Chief Warrant Officer 4 Brian Stewmon, pilots an AH-64D Apache Longbow helicopter for the Illesheim-based 6th Squadron, 6th Cavalry Regiment. Their mother, Capt. Michelle Stewmon, is a nurse for the 67th Combat Support Hospital in W&#252;rzburg.

Brian Stewmon returned late last month from an 11&#189;-month tour in Iraq. He got home just in time to kiss his wife goodbye and send her off on her own yearlong deployment.

The Stewmons are among a small number of dual-military families taking a double-barreled hit from the Army&#8217;s supercharged operations tempo the past two years.

Quite commonly, the military assigns married servicemembers to separate units in the same area. With the heavy demand for Army units in Iraq, inevitably some of those units have gone downrange at different times.

In Europe, the problem is hitting hardest this year in the W&#252;rzburg area, where the 1st Infantry Division is deploying this month with 12,000 troops, joined by hundreds of soldiers from support units such as the 67th CSH.

Unit commanders are doing their best to ease the pain. At the 67th CSH, Michelle Stewmon and several others were allowed to travel in the trail party, giving them a week or two with just-returned husbands or wives.

But the commands must meet their own demands, and compassion for one soldier can place added burdens on others.

In 2002, Winkler and her husband, Sgt. 1st Class Patrick Winkler, of the Giebelstadt-based 3rd Battalion, 158th Aviation Regiment, adopted Kyong&#8217;s two Korean nieces, Hye-Lim, 15, and Hye-Ri, 14. They lived together as a family just eight months before Patrick Winkler&#8217;s unit was called up to Iraq. Now he is home, taking care of two teenage daughters he barely knows, while his wife deploys.

Servicemembers who marry know it&#8217;s possible that one or both could be deployed. Most Army families have endured a South Korean or Balkans tour. But Operation Iraqi Freedom, with its one-year tours and large personnel demands, has boosted the burden to something no pre-9/11 soldier could have imagined.

All the services in recent years have emphasized family stability, giving lengthy periods of leave to servicemembers back from deployment and offering counseling to help with the adjustment.

But for dual-military families, there is barely time to hand over the car keys, much less rebuild a marriage. Duty always trumps family.

Sgt. Dexter Harris, 33, a licensed practical nurse with the 67th CSH, met and married his wife, Sgt. Tara Harris, in 2002 when both worked at the 28th Combat Support Hospital at Fort Bragg, N.C. They married after he received orders to Germany and expected her to follow shortly.

Chief Warrant Officer 2 Jerome Bussey, also of the 67th CSH, has been married for 15 years to Sgt. 1st Class Sharon Bussey, and they have three teenage children. They&#8217;ve served in the Army 18 and 16 years, respectively, so he was neither surprised nor especially upset when her unit came home just as his deployed.

That is the choice thousands of dual-military families already have made, sacrificing money and a career to keep some stability in the household.

Stop-loss has ended that option for many troops. Others have long-term commitments because of medical or pilot training. Most simply want to stay in.

Michelle Stewmon hopes that, with the brutal new op tempo, the Army comes up with a regulation giving dual-military families, say, 90 days of time together between deployments.