DSL soon will fill need for speed at Warner Barracks 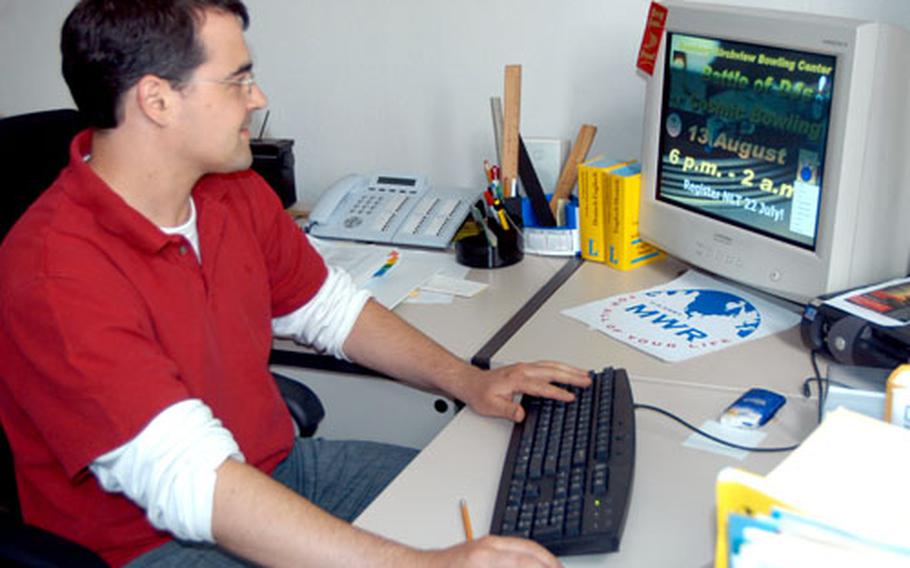 Simon Hupfer, marketing specialist for Morale, Welfare and Recreation at the 279th Base Support Battalion, scans through slides shown on the Command Information Channel on Friday. (Rick Emert / S&S)

BAMBERG, Germany &#8212; Units and businesses on Warner Barracks will soon have DSL-speed Internet connections under a modernization project scheduled for completion early next year.

The $37 million worth of improvements is for official use by Army units and organizations, which means families in housing and organizations such as the Army and Air Force Exchange Service still will have to rely on local Internet providers, said Jack Poland, director of Network Services Center, the counterpart of a Directorate of Information Management at bases in the States.

The project began in November 2004, and the outside work &#8212; such as laying the lines underground and installing switches &#8212; should be completed by the end of the year.

In all, crews have created 97 man- and hand-holes, laid about nine miles of trench line to hold the cables and laid about 20 miles of copper cable, Poland said.

While the construction may have irked drivers on the only road connecting the two ends of Warner Barracks &#8212; construction crews had to block portions of one of the two lanes along the road to lay the lines under the street &#8212; the end result for units and organizations will be worth the inconvenience, Poland said.

He added that when the computers are pulled across to the upgraded server, some of the older computers will have to be replaced to fully benefit from the upgrade.

&#8220;A lot of my research begins on the Internet, so a fast connection is very helpful,&#8221; said Simon Hupfer, marketing specialist for Morale, Welfare and Recreation on Warner Barracks.

&#8220;I think it will be a big improvement for all of the users and make it easier to get information provided by the [279th Base Support Battalion].&#8221;