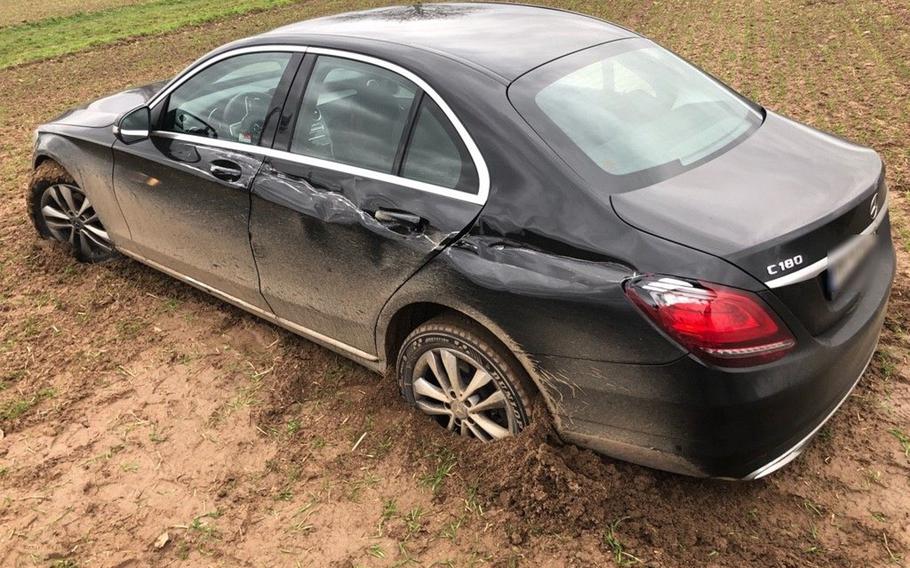 An American in a Mercedes rental car on his way from Landstuhl to Stuttgart caused $23,000 in damages to the car and had to turn in his driving license to the German police. (VU Geinsheim)

KAISERSLAUTERN, Germany — An American found sleeping in a battered Mercedes in a field had his license confiscated after he followed the walking directions on his GPS and drove through a narrow pedestrian tunnel, police said.

The man, who was not identified by German authorities, had a blood alcohol content of .10 — twice the legal limit in Germany — and a drug test found marijuana in his system sometime after police woke him up Sunday, about 30 miles east of Kaiserslautern, police said.

The driver, who a spokeswoman at Ramstein Air Base said Tuesday had no military affiliation, didn’t notice that his GPS was on the pedestrian setting and was telling him it would take 22 hours to cover the 132 miles between Landstuhl and Stuttgart Airport.

Soon after setting off, the navigation system told him to go through the tunnel, which police said was probably in Ramstein. He squeezed through it, but not without gouging the left side of the vehicle and doing an estimated 20,000 euros, or about $22,000, in damage to the rented Mercedes, police said.

Scraping the car along the side of a concrete wall didn’t deter the driver. He continued on his way until he came to the village of Geinsheim, near Neustadt an der Weinstrasse.

There, the driver and vehicle left the road and ended up in the middle of a field. Villagers found the car entrenched in mud, its driver sound asleep on Sunday.

The police were called and questioned the driver. He was not arrested but had his license confiscated pending review of his case by prosecutors.

He is being investigated for dangerous driving, Neustadt police spokesman Andreas Mueller said. Penalties include a ban on driving in Germany and a fine to be determined following a recommendation by prosecutors, Mueller said.

Authorities in the U.S. will be informed of the incident, Mueller said.

Whether the man eventually made it to the airport in Stuttgart is not known.

Stars and Stripes reporter Jennifer Svan contributed to this story.