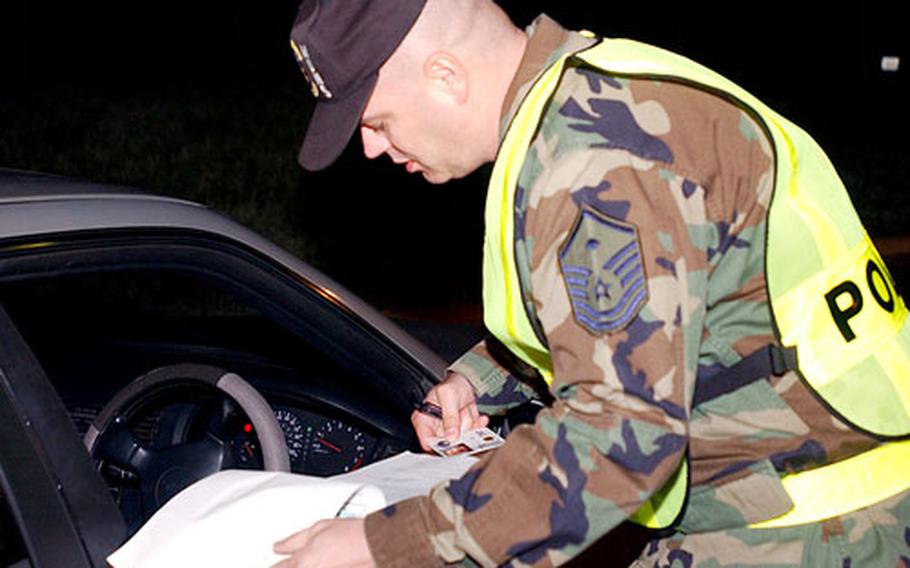 RAF LAKENHEATH, England &#8212; The United Kingdom&#8217;s largest U.S. Air Force installation is running an aggressive anti-drug initiative that calls for airmen to be screened for a urine sample upon arriving at the base.

Base officials conducted a random sweep about two months ago when 25 people were screened after entering Gate 1 early in the morning.

The team of screeners, which includes both Security Forces airmen as well as technicians from the 48th Medical Group, targeted every vehicle that entered the gate between 2 and 4 a.m. Sept. 9, a Saturday. Only active-duty members of the military are subject to the urinalysis.

The results of September&#8217;s screening are pending. However, the 48th Judge Advocate General&#8217;s office has not prosecuted any airmen for positive results from a random gate check in the past two years, according to a 48th Fighter Wing spokesman.

&#8220;Random drug testing is a tool wing commanders have at their disposal to help promote a healthy installation,&#8221; said a statement released by the 48th Public Affairs Office.

Base officials assert the gate checks are not a set &#8220;program,&#8221; and did not say how long they have been conducted. The checks are performed by order of the base commander &#8212; currently Brig. Gen. Robert P. Steel at RAF Lakenheath &#8212; and not by any timetable.

RAF Lakenheath spokeswoman Capt. Beth Horine said the September check was not related to an investigation of 11 airmen with the 48th Fighter Wing suspected of using or distributing cocaine, Ecstasy and marijuana in on-base dormitories. No charges have been filed in the probe by the Air Force Office of Special Investigations.

However, the method is not unique to RAF Lakenheath.

Base officials at Aviano Air Base, Italy, home to the 31st Fighter Wing, said similar gate drug tests have occurred there in the past, and the possibility for additional random gate checks exists in the future.

Stars and Stripes reporters Scott Schonauer and Kent Harris contributed to this report.