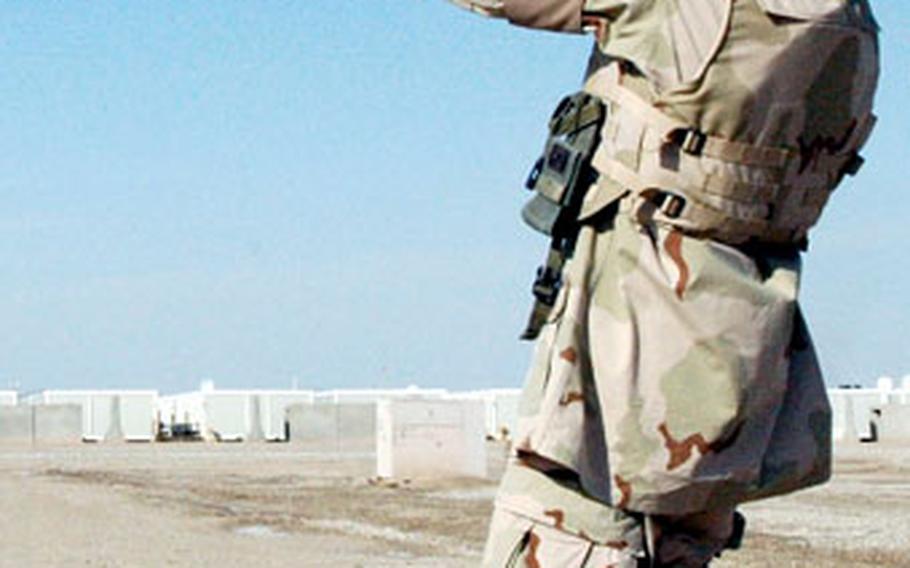 Senior Airman Jarod Johnson prepares to release a Desert Hawk remote-controlled surveillance aircraft Friday at Ali Base in Iraq. The aircraft is launched by a long bungee cord held by another airman out of frame. (Monte Morin / S&S)

Senior Airman Jarod Johnson prepares to release a Desert Hawk remote-controlled surveillance aircraft Friday at Ali Base in Iraq. The aircraft is launched by a long bungee cord held by another airman out of frame. (Monte Morin / S&S) 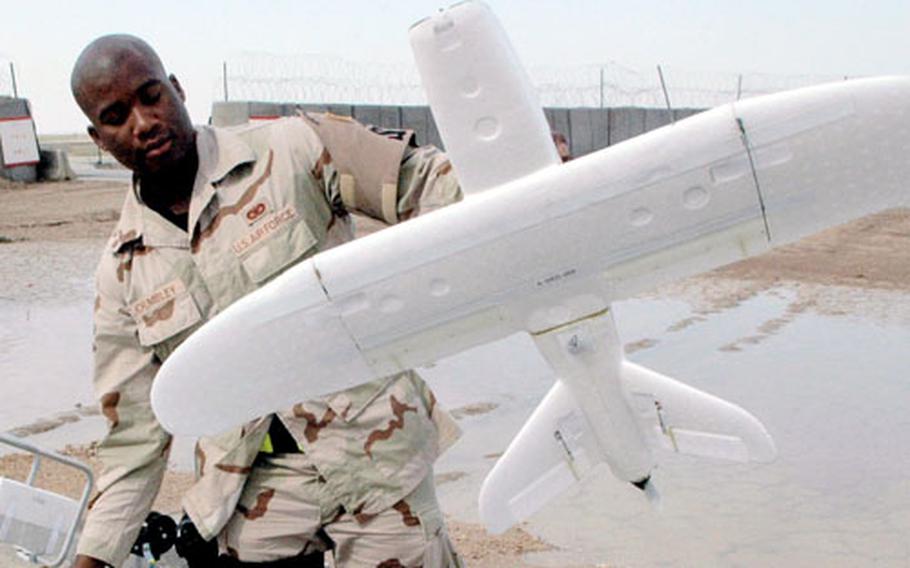 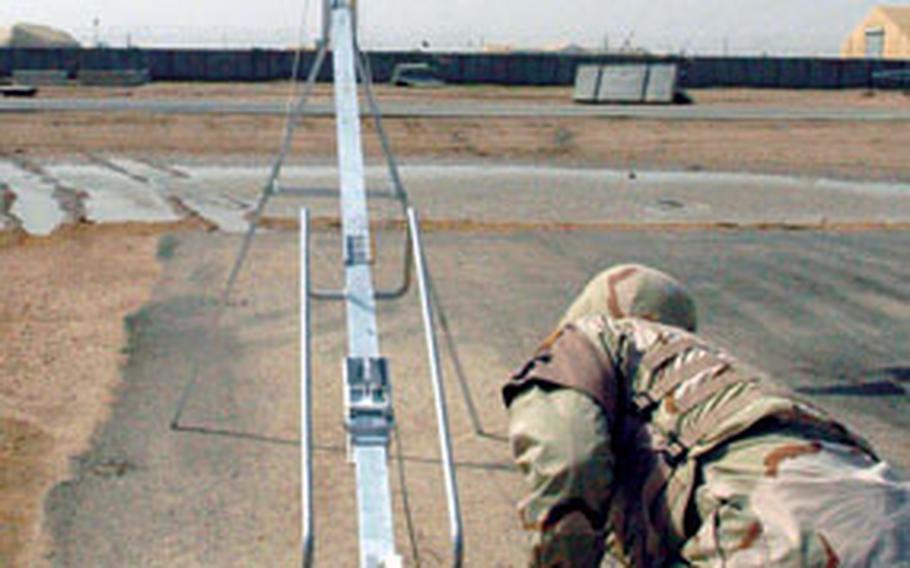 A catapult launcher hurls a remote-controlled Desert Hawk surveillance aircraft into the sky Wednesday at Ali Base in Iraq. (Monte Morin / S&S) 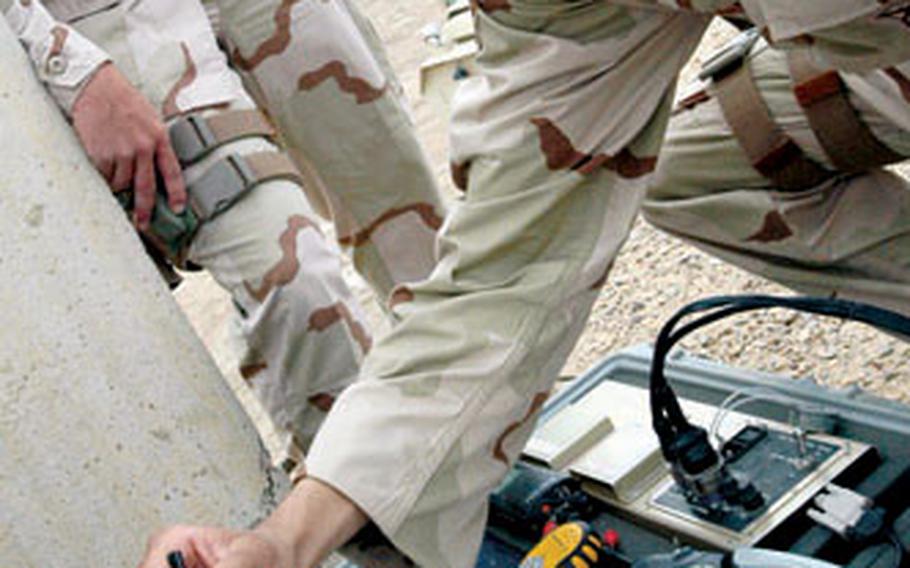 An airman uses a stylus and a laptop computer to remotely pilot the Desert Hawk surveillance aircraft. A second monitor shows video and infrared images captured by the toy-sized airplane. (Monte Morin / S&S) 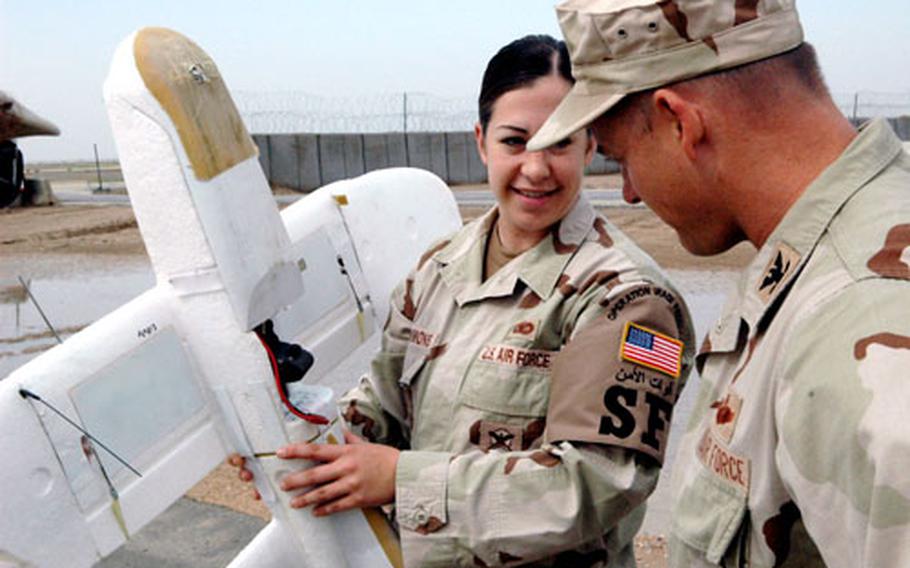 But to airmen at this sun-baked air base outside Nasiriyah, the stubby, white surveillance plane has another, less lofty nickname.

Designed by Lockheed Martin, the Force Protection Airborne Surveillance System, or FPASS, is intended to aid Air Force security personnel in the protection of military bases in Iraq and Afghanistan. Controlled remotely by a touch-sensitive computer screen, the aircraft zips overhead to potential trouble spots beyond the wire and beams video or infrared images back to its operators.

Cruising at roughly 60 miles per hour, the Desert Hawk can help evaluate a threat long before ground patrols arrive on the scene, operators said.

A cousin of sorts to drone aircraft like the Predator, the 3-foot-long Desert Hawk looks more like something for sale at Radio Shack than a $40,000 reconnaissance vehicle. The Desert Hawk is constructed of a mold-injected polypropylene foam that looks exactly like Styrofoam, and is assembled like a snap-together model. Its wings and fuselage are held together with strips of Velcro and packing tape.

Perhaps the most toylike quality of the aircraft, though, is the manner in which it is launched: by an enormous bungee cord.

During a recent launch Friday, an airman wearing a helmet and a protective vest held one end of the bungee cord stationary, as another soldier in the same protective gear stretched the cord taut and attached it to the nose of the aircraft. Once the aircraft&#8217;s operator gave the thumbs up, the airman released the Desert Hawk, sending it rocketing toward the stationary soldier. Once it reaches a certain speed, the aircraft&#8217;s rear-mounted propeller kicks in and the surveillance plane goes purring into the blue.

The airmen who launch the plane wear protective gear because sometimes the plane doesn&#8217;t make it into the air and clips the airman who is anchoring the bungee cord.

Lockheed Martin has built an experimental catapult launcher for the aircraft, but the system still has a few bugs in it.

The way in which the aircraft lands is even more primitive than the way it&#8217;s launched. It has no landing gear, so it simply lands on its belly, which is outfitted with a layer of sturdy Kevlar.

Because of its simple construction, operators say, the aircraft can endure a beating, as well as a number of hard landings or outright crashes. If it breaks apart, the pieces are simply glued or taped back together.

Once airborne, the aircraft can fly a preprogrammed course, or it can be operated manually.

During Friday&#8217;s demonstration, the aircraft swooped and snaked through the sky over Ali Base, beaming back images of living trailers, grounded aircraft, buildings and personnel. Operators cheered at the end of the demonstration when the Desert Hawk glided earthward and skidded to a halt on a field of dried mud.