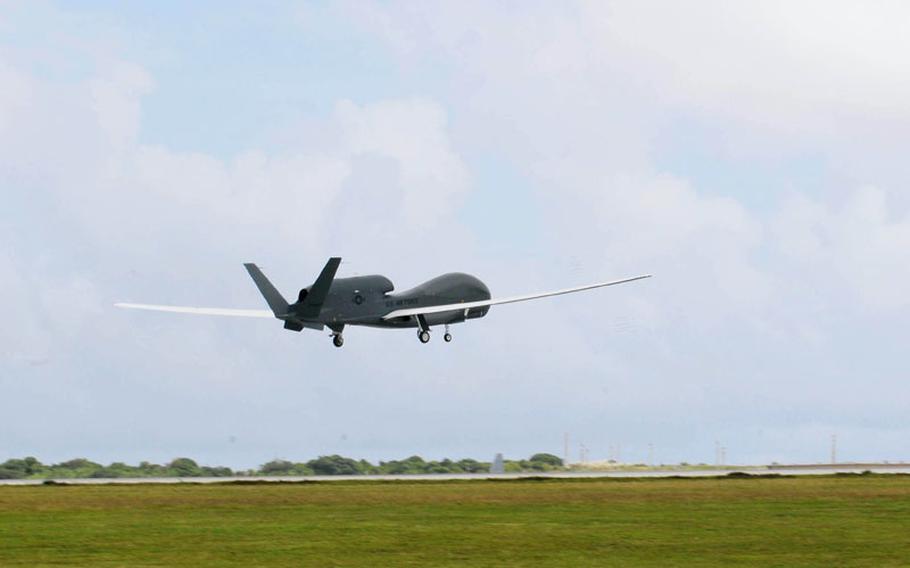 A Global Hawk takes flight. According to the aircraft?s manufacturer, Northrop Grumman, the Global Hawk flies at 60,000 feet and has a line-of-sight to targets more than 340 miles away. (Nichelle Anderson/Courtesy of U.S. Air Force)

A Global Hawk takes flight. According to the aircraft?s manufacturer, Northrop Grumman, the Global Hawk flies at 60,000 feet and has a line-of-sight to targets more than 340 miles away. (Nichelle Anderson/Courtesy of U.S. Air Force) 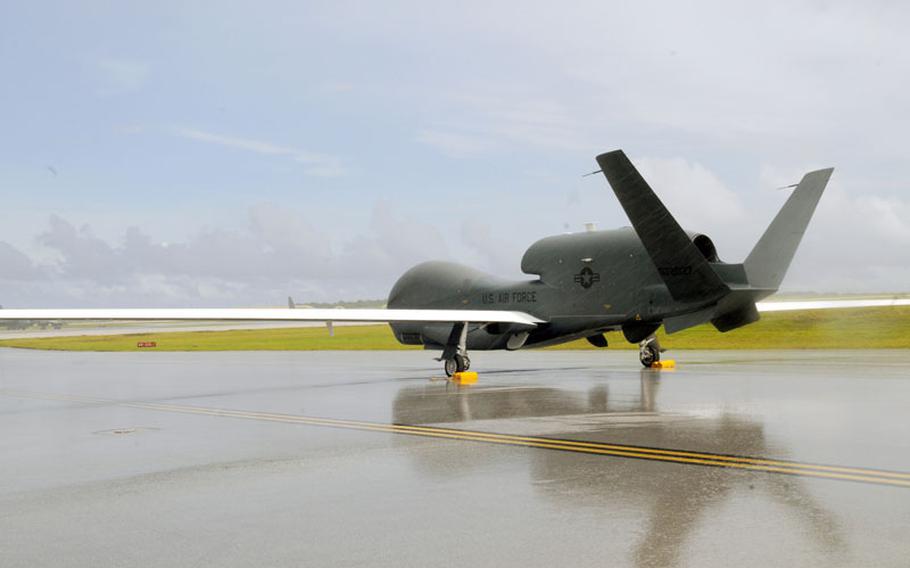 The U.S. is in negotiations with the South Korean government to fly the RQ-4 Global Hawk surveillance drone near the Demilitarized Zone, a move that potentially would provide an unprecedented view of goings-on in reclusive North Korea. (Nichelle Anderson\Courtesy of U.S. Air Force)

TOKYO &mdash; The U.S. is negotiating with South Korea to fly the RQ-4 Global Hawk surveillance drone near the Demilitarized Zone, a move that could provide an unprecedented view of goings-on in reclusive North Korea and draw the ire of China.

Flown extensively in Afghanistan and Iraq for the past 10 years, the first Global Hawk arrived on Guam late last year and there are now three flying in the Asia Pacific theater.

South Korea is among a large group of nations in the region with whom U.S. officials are negotiating for flyover rights, according to Lt. Col. Terran Reneau, chief of intelligence, surveillance and reconnaissance for the 13th Air Force in Hawaii.

Reneau did not give a timetable for the negotiations with the South Koreans but added: &ldquo;I think we are very close&rdquo; to flying in Korea. South Korean officials would not comment on the Global Hawk issue.

Lt. Col. David Gerhardt, Pacific Air Forces&rsquo; chief of command and control, intelligence, surveillance and reconnaissance requirements, added: &ldquo;Global Hawk will likely fly over land in Korea as soon as agreements have been solidified to do that.&rdquo;

Gerhardt did not name other nations in negotiations over Global Hawk flyover rights but said those closest to Guam with potential emergency landing sites are among the first to be approached by the U.S.

South Korean media have also reported that Seoul is interested in buying its own Global Hawks, which carry long-range and infrared cameras, RADAR and listening devices that can intercept foreign military signals.

According to the aircraft&rsquo;s manufacturer, Northrop Grumman, the Global Hawk flies at 60,000 feet and has a line of sight to targets more than 340 miles away. The range of the aircraft&rsquo;s cameras and sensors is classified but the line of sight from a Global Hawk flying near the DMZ would extend well beyond the Yalu River that marks North Korea&rsquo;s border with China.

The drone, conceived in 1995 as a replacement for the U-2 spy plane, will enable U.S. intelligence agencies to update databases on military movement and missile sites in North Korea, said retired Air Force Col. Ralph Cossa, who is the president of the Pacific Forum Center for Strategic and International Studies in Hawaii.

Of particular interest to U.S. intelligence officers is North Korea&rsquo;s development of nuclear weapons. In 2006 the regime, which has a long track record of using terrorism and unprovoked military attacks on its neighbors, announced that it had tested a nuclear bomb.

Once approved to use the South&rsquo;s airways, the Global Hawk&rsquo;s cameras could focus on places where experts believe the North might be developing weapons of mass destruction.

&ldquo;One never knows what Pyongyang is up to, and watching sudden moves could provide an indication of an impending provocative action,&rdquo; Cossa said.

The North Koreans and their Chinese neighbors won&rsquo;t be happy about the presence of the Global Hawk so close to their borders, Cossa said.

&ldquo;The Chinese in particular are raising concerns about U.S. reconnaissance off their coast,&rdquo; Cossa said. &ldquo;At least Global Hawk is more out of sight and [has] greater stand-off range, which might make it appear less provocative ... but [it] will still hurt the feelings of 1.3 billion Chinese people who resent being spied upon.&rdquo;

In July, China&rsquo;s Defense Ministry demanded an end to the U.S. military surveillance flights near China, according to a report in the Global Times newspaper, which is part of the Communist Party-controlled news media.

&ldquo;We demand that the U.S. respect China&rsquo;s sovereignty and security interests, and take concrete measures to boost a healthy and stable development of military relations,&rdquo; the ministry said.

The Chinese demand followed revelations that two Chinese Su-27 jets chased a U-2 aircraft over the Taiwan Strait on June 29, and that one jet crossed over the dividing line between Taiwan and the mainland along the 100-mile-wide waterway.

Chairman of the Joint Chiefs of Staff Adm. Mike Mullen told the Washington Times that he discussed the reconnaissance flights during a visit to China and at earlier talks in Washington with Chinese Gen. Chen Bingde, chief of the general staff.

Mullen said halting the reconnaissance flights and giving in to Chinese demands would violate long-established international rules for freedom of navigation.

&ldquo;The Chinese would see us move out of there,&rdquo; he said. &ldquo;I don&rsquo;t see that as the case. We&rsquo;re not going to do that, from my perspective. These reconnaissance flights are important.&rdquo;

Not surprisingly, the Chinese appear to be working on their own version of the Global Hawk. Photographs of a Chinese drone &mdash; dubbed the Xianglong, which bears a striking resemblance to Northop Grumman&rsquo;s aircraft &mdash; were posted in June on websites that monitor the Chinese military.