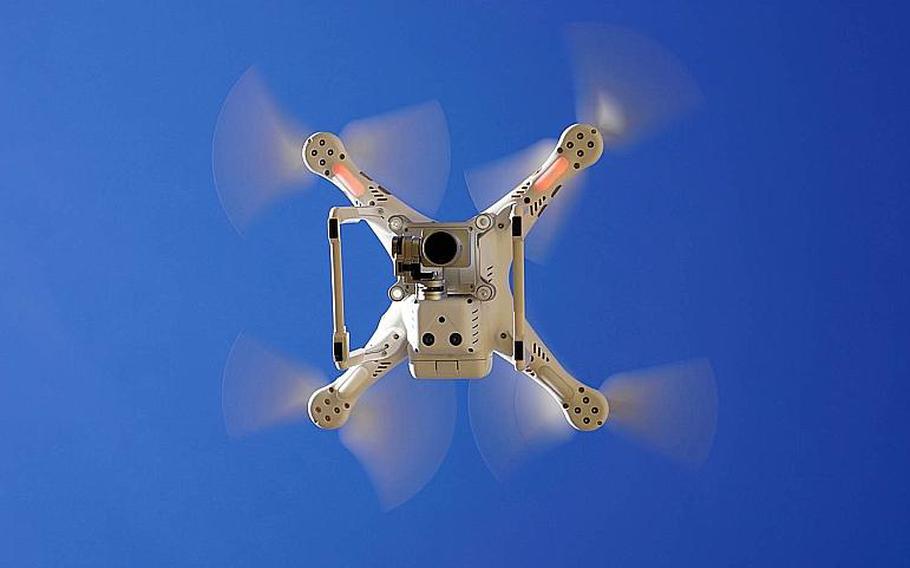 People caught flying drones over or near U.S. military bases in Japan could face up to a year in prison and fines as much as $4,472 under a planned law change. (Courtesy of Pixabay)

YOKOTA AIR BASE, Japan — Unauthorized drones flew over American military facilities in Japan 70 times in 2018, according to U.S. Forces Japan.

The incidents were revealed after Japan’s Cabinet on Tuesday approved a law change that would ban the remotely piloted aircraft from flying over or within 300 meters — just under 1,000 feet — of U.S. or Japanese military bases.

“The unauthorized flight of small, unmanned aircraft systems over military bases and airfields in Japan poses a considerable risk to the safety and security of the people who live and work on those installations, as well as the local communities around these installations,” he said.

Drone overflights of air bases that host both military and civilian air traffic create significant dangers for those in the air and on the ground and any measure seeking to address those concerns is welcome, Hutcheson said.

“When a [drone] trespasses into the airspace over a US military installation, we don’t know who is flying it or what their intent is; from a safety, security and force protection perspective, this is a real concern for our installations,” he said.

In a 2018 incident at Camp Schwab, for example, a drone unexpectedly veered underneath a U.S. military helicopter to within 200 feet of the aircraft, requiring the pilot to take evasive action to avoid a potential collision, Hutcheson said.

“[The proposed new law] will revise a law banning flights by small unmanned aircraft in order to prevent danger to defense-related facilities,” Japan’s Defense Ministry said in a statement Wednesday.

Anyone operating a drone in a restricted area would face a year or less imprisonment or fines of up to $4,472 under the proposed law change, said a spokesman from the Small Unmanned Aircraft Measures and Promotion Office.

Police will first issue warnings to people flying drones within 300 meters of facilities. Those who ignore such warnings will be prosecuted, he said.

The ban will also apply to flights over some sports venues during the 2019 Rugby World Cup and 2020 Tokyo Olympics and Paralympics, the spokesman said.

There have been cases of terrorist attacks outside Japan using drones, he added.

Last year, assailants unsuccessfully targeted Venezuelan dictator Nicolas Maduro using a pair of drones carrying more than 4 pounds of plastic explosive, and there have been many cases of Islamic State terrorists using drones to drop bombs during fighting in Iraq and Syria.

“USFJ appreciates the Japanese government’s efforts to address this mutual safety and security concern and to strengthen protections for US military facilities,” Hutcheson said.

The law change won’t impact recreational drone use by U.S. personnel, he said, noting that each installation has its own rules for flying remotely piloted aircraft on base.

The Japanese drone law revision has been submitted to lawmakers and is awaiting their approval, a cabinet office official said.

Military bases subject to the ban will be decided by the defense minister once the law is in place, a Defense Ministry spokeswoman said. The ministry will hold discussions with U.S. forces to determine which facilities need to be subject to the ban, she said.