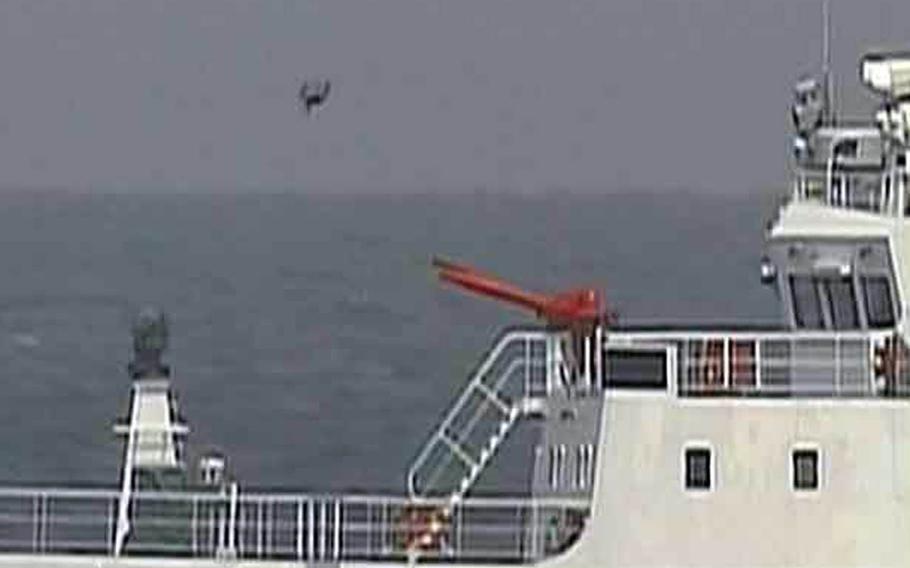 What appears to be a drone aircraft flies near Chinese coast guard vessels that entered Japanese waters near the Senkaku Islands, Thursday, May 18, 2017. (Courtesy of Japan Coast Guard)

The first of the four white-hulled and numbered China Coast Guard ships entered the 12-nautical-mile zone around Uotsuri, one of the Senkaku Islands, just after 10 a.m. and remained there until about noon, said a Japan Coast Guard spokesman in Naha.

What appeared to be an unmanned aerial vehicle was seen flying near one of the ships, the first time a drone has been spotted above a Chinese government vessel in the area.

Maritime confrontations and jet interceptions between China and Japan have become commonplace in recent years. The last incident occurred May 8 when four similar vessels, including one that appeared to have a gun turret, were spotted near the islands.

The Senkakus are an uninhabited island chain in the East China Sea, between Okinawa and Taiwan. Their resource-rich waters are claimed by both Japan and China, which refers to them as the Diaoyu, as well as by Taiwan.

The United States has long declined to take a position on future sovereignty regarding the islands; however, both President Donald Trump and Barack Obama have said the defense of Japan includes the island chain.

As of Friday afternoon, three of the Chinese ships remained on patrol in Japan’s contiguous zone, which extends 24 nautical miles from shore, the spokesman said.

There were 121 incursions into Japanese territorial waters by Chinese government vessels in 2016, coast guard officials have said. There have been 47 incidents this year alone.