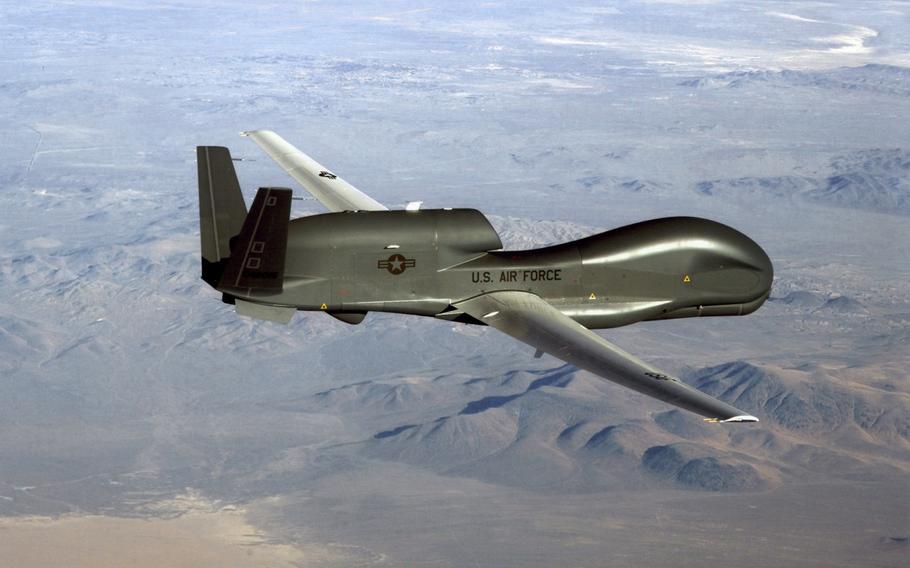 KAISERSLAUTERN, Germany — Enlisted airmen from all career fields may now apply to fly the RQ-4 Global Hawk, the Air Force said Monday in a move that potentially opens the opportunity to pilot the unarmed intelligence-gathering drone to tens of thousands of more airmen.

The announcement comes just over a month after the Air Force released details of how the service planned to retrain a select group of enlisted airmen to fly the Global Hawk.

In July, the service said it had selected 10 enlisted troops for the program, marking the first time airmen would begin training as pilots since World War II.

But airmen eligible to apply at the time had to be career enlisted aviators — such as loadmasters or flight engineers — from the ranks of staff sergeant through senior master sergeant.

Applicants still must hold a rank from staff sergeant through senior master sergeant, as well as be retainable for six years after graduation from the course for remotely piloted aircraft. Airmen in certain high-demand, understaffed career fields may need special permission from a career field manager to apply, and their selection may be limited or restricted, the Air Force said.

Airmen interested in applying will first have to demonstrate their knowledge in math and aviation matters, among other areas, by taking the computer-based Air Force Enlisted Pilot Qualifying Test and the Test of Basic Aviation, completing those by Oct. 14.

Airmen who have already accrued off-duty flying hours can apply that experience toward their score, Air Force officials said. Airmen who make the initial cut will have to get a flight physical.

The selection board is to meet in February, the Air Force said.

In a statement Monday the Air Force didn’t specify why the eligibility was opened beyond saying that the service was “tapping into the talent of our skilled, diverse and innovative enlisted force.”

But in December, when the service first announced it would seek to integrate the enlisted force into remotely piloted flying operations, Air Force senior leaders said the decision was to ensure the service can support “the future threat environment,” one in which “emerging requirements and combatant commander demands will only increase.”

The Air Force has been struggling to keep up with the increasing global demand for armed and unarmed drones, as the systems are frequently used for intelligence-gathering and targeted killings of suspected terrorists. Global Hawks have been used in support of combat operations against Islamic State targets in Iraq and Syria, the Air Force has said.

The drones can operate at altitudes of up to 60,000 feet for more than 30 hours, surveying thousands of square miles on a single mission. Their sensors allow military commanders to gather near real-time imagery and use radar to detect moving or stationary targets on the ground, according to Northrop Grumman.