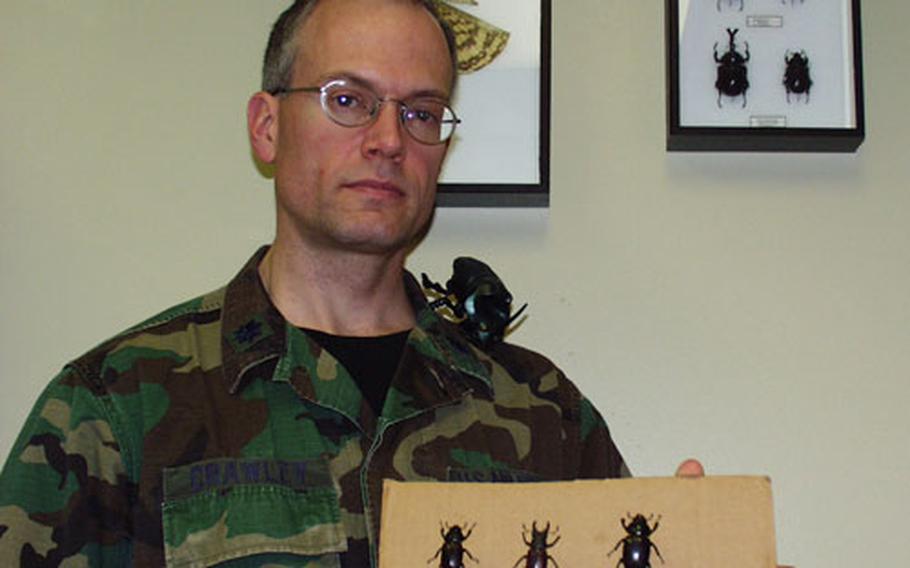 Lt. Col. Geoff Crawley has been collecting insects — mainly beetles — for the last 20 years. A radiologist at the medical center at Aviano Air Base, Italy, Crawley has come across several beetles during his stay at Aviano, including the three European stag beetles that he&#39;s holding in this picture. (Kent Harris / S&S)

AVIANO AB, Italy &#8212; When Geoff Crawley says he&#8217;s a beetles fan, he&#8217;s not talking about music. At least not anything more than some occasional clicking or skittering sounds.

He&#8217;s talking about the insect variety. Bugs. And lots of them.

The lieutenant colonel even has a few of them in his office at the Aviano Air Base medical center. They&#8217;re dead, however. Stuck fast with pins and sitting in cases.

Still, a few visitors to the radiology department can momentarily get a bit freaked.

Crawley says that&#8217;s not likely. Most of the insects he has collected and studied over the past 25 years are pretty harmless.

Still, some of his creatures look pretty fierce. Just ask his wife.

But some of the larger beetles in her husband&#8217;s collection?

Geoff estimates that his collection numbered more than 1,000 at one point, but he has far fewer now.

That is partly because much of his collection fell victim to other insect predators while in storage. And it partly because it takes a lot of space to store them.

And it is also partly because Carolyn isn&#8217;t exactly fond of them.

For instance, there was the time he was driving from a restaurant in Aviano and heard a beetle flying through the air. He stopped the car, got out and followed the beetle down the road, eventually cornering it.

His hobby has certainly snagged the attention of his children. Daughter Lauren and sons Stephen and Aaron seem to be much more interested in beetles than mom is.

Aaron, 7, brought back a mounted scorpion from a trip to Switzerland. And he wants a pet tarantula.

Geoff says he started seriously collecting when he was about twice Aaron&#8217;s age. He was helping another member of the Boy Scouts earn a merit badge on insect life.

After that, there were visits to state fairs to see exhibits. And a growing collection of insects, mainly beetles. Stag beetles eluded him growing up, though.

He has found a few European stag beetles while stationed at Aviano, though.

And he says when the weather turns warmer, he&#8217;ll look for some more. He now has three, which he had alive in his house at one point, attached to a sheet of cardboard.

That&#8217;s even though he went to the trouble of finding a rotting tree trunk and bringing it in the house for them to feed on. Carolyn eventually tossed out the tree trunk.

In order to maintain what he calls a realistic appearance, Geoff painstakingly puts pins at various parts of an insect&#8217;s body after it&#8217;s dead. It takes about a week until the insect&#8217;s legs and other body parts stay in place.

Most of the insects that are in such displays are killed right before they&#8217;re put into the display cases. One technique to do that is to use the vapor from finger nail polish remover.

And never winds up an any cases.

There has been the occasional one that has made its way into a water bottle. He&#8217;s learned not to put beetles that have the capability of creating a stink inside such a bottle, though. The bottle is essentially ruined afterwards.

Geoff says he&#8217;s read a lot of books on beetles. But much of what he knows about beetles and collecting them he&#8217;s learned on his own. Sometimes the hard way.

The same thing happened later to his larger collection, though he had taken precautions &#8212; mothballs usually work well &#8212; and had his specimens in better cases.

Still, his parents told him the insects he had stored were being eaten &#8212; and so was other stuff in their home. So the bugs had to go.