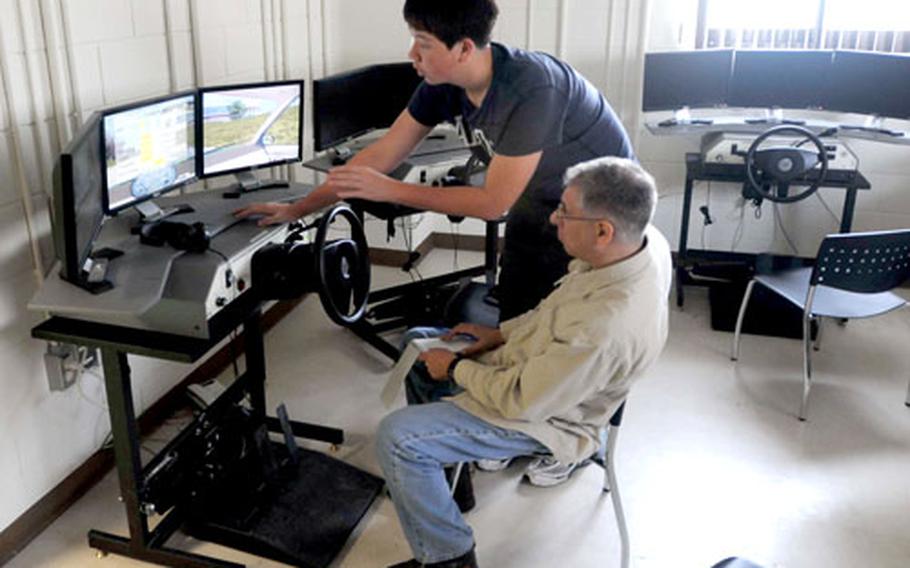 CAMP HUMPHREYS, South Korea &#8212; Let&#8217;s see, what&#8217;s the name of those pills people take for dizziness? They might be a good thing to have on hand for soldiers at Camp Humphreys when they go through animated driver training using the new high-tech driving simulators.

We got behind the wheel of one of the training consoles Thursday afternoon for a firsthand look. We found they&#8217;re plenty realistic &#8212; so realistic they made us dizzy if we took a curve too fast or kept driving in the traffic roundabout. Not because we meant to, but because we didn&#8217;t know what the heck we were doing. Not once, not twice, but several times. No wonder we got dizzy.

The simulators are what the Army at Humphreys will use to help soldiers and civilians learn to drive or improve their driving skills.

Driver training for basic, intermediate and advanced skill levels will start later this month, with contractors providing the instruction.

The simulator facility has 25 stations that let trainees practice driving in different situations and conditions &#8212; country roads, city streets, clear weather, rain. And there&#8217;s one other simulator for motorcycle riding.

&#8220;We can do hands-on skills development for driver&#8217;s education for soldiers before we actually put them behind the wheel and send them outside the gate,&#8221; said Randy Turnage, safety manager for the U.S. Army Garrison-Humphreys.

Software allows the trainers to tailor each session to the needs of a given soldier, he said.

And with many soldiers entering the Army with little driving experience, the simulators are especially helpful.

&#8220;You would not believe how many soldiers are coming into the military who have not driven a vehicle in their life,&#8221; Turnage said.

We tried the city roads in wet weather and made one flub after another. That&#8217;s partly because it takes some time just to get used to the simulator&#8217;s array of buttons, switches, computer symbols.

There&#8217;s a key you have to turn to start the engine. No turn, no start. Then you have to move the shift lever to get from park into drive. No shift, no drive.

The scenarios have their own sound effects. If you choose the bad weather session, you&#8217;ll hear rain falling and see it through your windshield. If you want the windshield wipers going, you have to turn them on.

There&#8217;s a brake pedal and an accelerator, just as in an actual vehicle. If you brake suddenly, you&#8217;ll hear the sharp screech of brakes.

If you make a driving error, a message will appear on your console:

Before we were finished, we&#8217;d run lights and stop signs. We&#8217;d blocked traffic &#8212; one thing the sound track doesn&#8217;t have are the curses and threats of drivers behind you. There was scraping the curb, veering out of our lane, colliding with one vehicle, and by not making our left turn in time, piling straight into a wall.

And yet, apart from that dizziness, we and the rest of the world emerged unscathed.