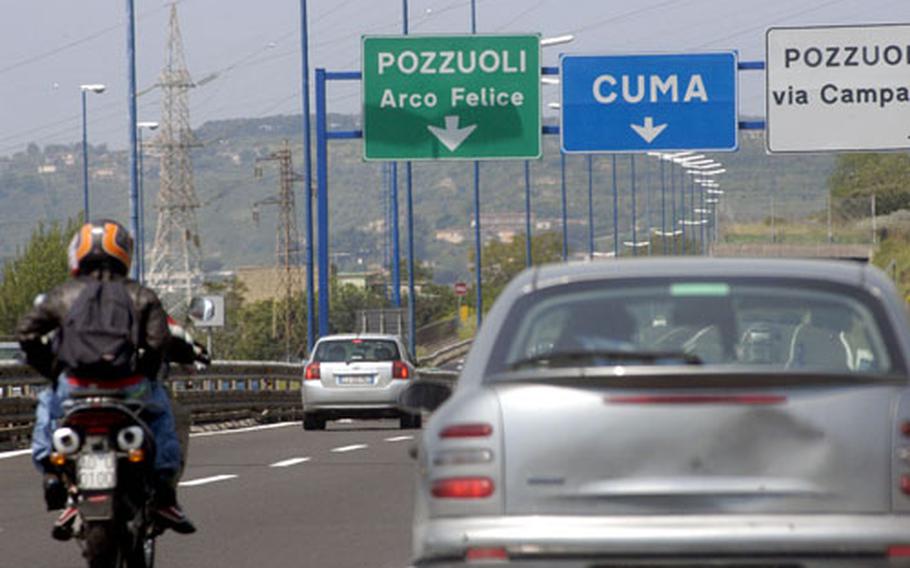 A recent survey of Italian insurance companies found that Naples residents paid the highest car insurance in the country. A look at various agencies that cater to U.S. military forces in Europe found the same thing. (Jason Chudy / S&S)

That goes double for auto insurers.

Residents in Naples, however, might choose to live without them &#8212; at least their auto insurance bills &#8212; especially since a recent report showed that &#8220;Bella Napoli&#8221; has the highest premiums in Italy.

The study looked at rates for the country&#8217;s 18 top car insurers and checked their rates in 10 provinces, according to a summary published on the Agenzia Giornalistica Italia Web site.

Not surprisingly, the report states, the 18-year-old student pays most.

Unlike the U.S., where a driver could have his or her license for two years at that point, the legal driving age in Italy is 18.

High insurances rates have driven some in the military to sell their American cars before transferring to Naples.

&#8220;That&#8217;s why I sold both my cars before coming out here,&#8221; said Petty Officer 2nd Class Aaron Franks of the Naval Computers and Telecommunications Station, who has been stationed in Naples for about six months.

Franks said he&#8217;s not the only one who has faced extremely high insurance rates.

Yisrael said the high cost of insurance isn&#8217;t too shocking, based on Naples&#8217; reputation for bad driving and high crime rates.

Stars and Stripes called car insurance companies in Europe that cater to U.S. forces to get full-coverage rate quotes on a 2000 Dodge Neon Sport.

Because the rates are determined by many variables, here&#8217;s what was used for these quotes:

The driver&#8217;s a 35-year-old man who mainly drives to and from work, less than than 15 miles per day.He&#8217;s married and has only one car, meaning he gets no discount for having more than one insured vehicle. He has no tickets or accidents, nor does his wife.The car has anti-lock brakes, driver- and passenger-side airbags, automatic everything and a car alarm that disables the ignition when it&#8217;s triggered.The policy has a $250 deductible.Many agencies asked about different features when asked for &#8220;full coverage&#8221; quote. Most asked about the car alarm, but one went so far as to ask about the driver&#8217;s health conditions. Here are quotes for one year of coverage.