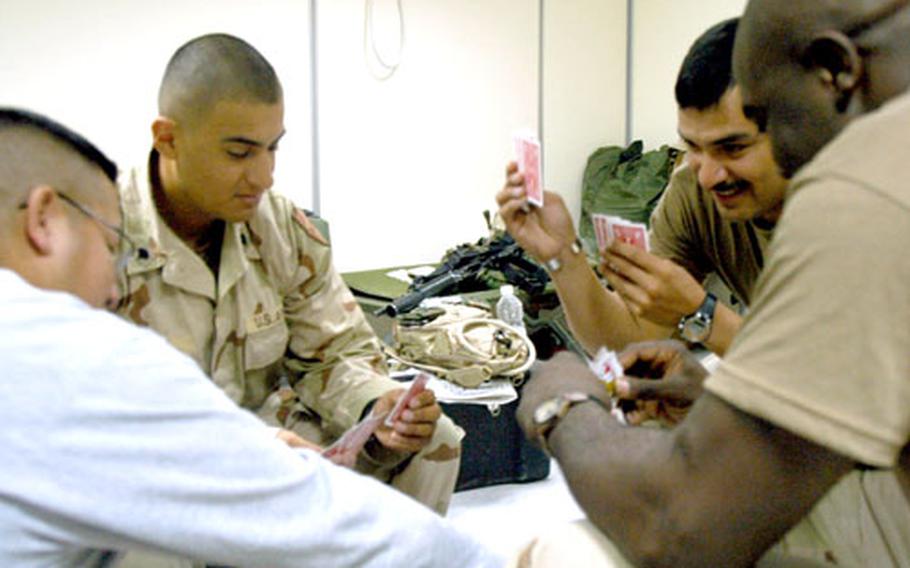 All are expert infantrymen and double as bodyguards for the leaders in Strikeforce.

Dean&#8217;s driver, Sgt. James Coombs, is one of the largest men in the brigade and the 8th Army boxing champion. Spc. Rigoberto Tovar, who drives for the deputy commander, competed in the Golden Gloves amateur boxing competition.

Before he left South Korea, Coombs promised all 2nd ID sergeants major that Dean would come home safely, he said. The other drivers are just as determined to do the same for the leaders they protect, they said.

The group rates itself as the best and safest wheelmen in the brigade.

The drivers are quick to point out that their jobs involve more than just driving and acting as bodyguards.

Sgt. Ray Gonzales, an accomplished dancer, has helped take care of Bialek&#8217;s children and pets, picked up dry cleaning and sold Girl Scout cookies as part of his job.

&#8220;People think you just drive, but we have to take care of them (the leaders) first before we can take care of our own stuff,&#8221; said Sgt. Joe Ramos, who drives for Patton.

Drivers have to be trustworthy, Combs said.

The group also gets to see a different side to the brigade leaders that front-line soldiers don&#8217;t, they said.

Coombs&#8217; work with the association has exposed him to the lighter side of sergeant majors, he said.

&#8220;They are known for making spot corrections and being in people&#8217;s butts constantly. I get to see them when they let their hair down. When they have a farewell they cut loose. They are people too,&#8221; he said.

The drivers rate Dean the hardest taskmaster of the brigade leaders.

&#8220;When it comes to paperwork, this dude is so meticulous it is ridiculous. He thinks of every little detail,&#8221; Coombs said.

Bialek likes to get an answer to his questions immediately, Gonzales said.

Graves is a fitness fanatic, said Tovar, the newest on the job.

The small band of drivers find themselves always together, working or waiting for the next assignment. Back in South Korea they drank together at the Pan-Korea club in Tongduchon. The three Hispanic drivers, all members of La Gente, a Hispanic fraternity, are teaching Coombs about Mexican culture, they said.

On a typical day in Kuwait, where the Strikeforce is preparing for its Iraq mission, the drivers could find themselves running errands for their boss around Camp Buehring or headed to Port Shu&#8217;aiba to check on the movement of equipment.

They know that more dangerous challenges await them in Iraq but remain determined to make sure their leaders return safely.