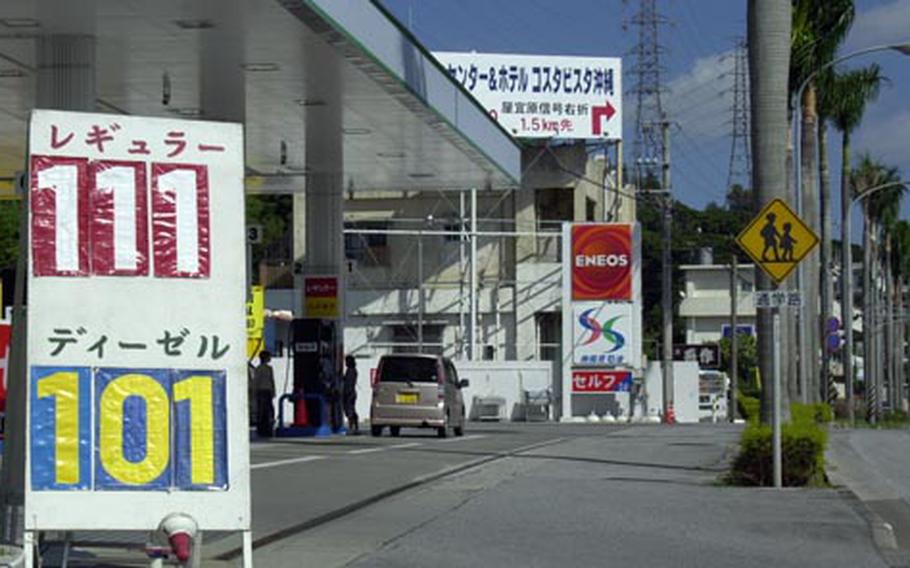 Gas prices on Okinawa are always lower than those in mainland Japan, thanks to a special economic package Okinawa receives. These prices, in yen, are per liter and equal about $4.20 a gallon. The top price is for regular gas; the bottom price is for diesel. (Chiyomi Sumida / S&S)

SASEBO NAVAL BASE, Japan &#8212; Gas prices are continuing to fall all over this week &#8212; unless you buy from U.S. military base stations in Japan and Okinawa.

International declines in oil and gas prices, including a scheduled 53-cent drop to $2.75 per gallon for regular unleaded at Army and Air Force Exchange pumps in South Korea this weekend, have done nothing to sway prices hovering above $4 per gallon on Japan and Okinawa bases.

AAFES said prices at those bases will hold steady at $4.06 until at least December, when the Defense Energy Support Center re-evaluates the prices it charges AAFES.

Meanwhile, the average price for a gallon of gas in the United States fell to $2.65 this week, down 25 cents from last week, according to the U.S. Energy Information Administration.

The precipitous fall in recent weeks &#8212; except at Japan and Okinawa bases &#8212; has caused a backlash of resentment among some consumers.

"They say that they base prices on the average national price of gas the previous week," said Paul Cassity, an Okinawa retiree and one of many who wrote to Stars and Stripes this week about gas prices. "But that only applies when they want to raise the price."

But prices at Japan and Okinawa military retailers have been locked since the fuel market started its downward spiral.

"I always thought [the price] was supposed to match what the average was in the States," said Senior Airman Josiah Viklund, of Yokota Air Base in Japan.

DESC sells gas to base retailers in Japan for $4.19 per gallon, which accounts for the bulk of costs at the pump, even with a 25-cent-per-gallon subsidy from the government of Japan, said Master Sgt. Donovan K. Potter, a spokesman for AAFES.

AAFES has been selling the medium-grade unleaded for $4.06, which includes a 12 cent-per-gallon dispensing charge, and has not made a profit since July, Potter said.

"I have heard and considered AAFES&#8217; comments about their DESC pricing, but it certainly seems interesting to me to see prices drop in Korea, Guam, Europe and other places that AAFES serves, while our prices remain fixed," Gunnery Sgt. Eric Gray, of Camp Foster, Okinawa, wrote in an e-mail to Stars and Stripes.

While base prices stagnated, off-base gas prices in Japan dropped for the 12th straight week, according to a spokesman for the Tokyo-based Oil Information Center.

Prices have fallen so far so fast that, if the trend continues, servicemembers on Okinawa could see off-base prices nearing what they pay at AAFES pumps. Japanese gas stations on the island, which are given special tax breaks by the national government, were charging the equivalent of about $4.20 per gallon Thursday.

"The recent gas prices, however, seem to be going down far more than what the tax break helps," said Hajime Yamaguchi, assistant chief of the Petroleum and Natural Gas Section of the Okinawa General Bureau&#8217;s Economic and Industrial Department. "It seems that price war is playing a part."

At Osan Air Base in South Korea, the price of a gallon of unleaded was to drop Saturday to $2.75 from $3.28, said Kwon Chun-pong, manager of the AAFES car care center.

The last time unleaded was below $3 a gallon in South Korea was in early November 2007, according to AAFES price data. The high this year was $4.21 in July.

Don Penrod, a Defense Department civilian who works as an F-16 aircraft rep at Osan, said he too is pleased with the significant drop.