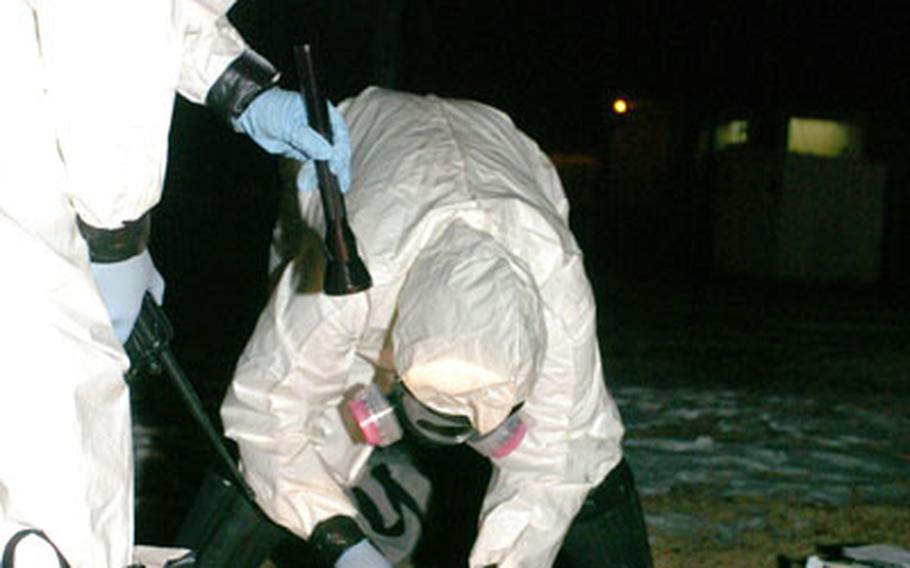 YOKOTA AIR BASE, Japan &#8212; Base emergency responders labored in bitter cold Tuesday night to neutralize the impact of a staged terrorist attack.

Under the scenario, Japanese police pursued an Asian man on foot through the fence line that intersects Yokota&#8217;s west side. But the suspect was struck by a train and flipped over the barbed wire and onto the base. Turns out, he was strapped with a backpack containing an unknown chemical substance.

Exercise-evaluation team members laid a mannequin in the open field near the railroad tracks to give the setting a dose of realism. It was part of the base&#8217;s weeklong Operational Readiness Exercise, scheduled to end Friday.

There were no other &#8220;casualties&#8221; in the incident but security forces, firefighters and bioenvironmental specialists were dispatched to the site after the call came into Yokota&#8217;s command center around 6 p.m.

&#8220;Response and containment. We want to limit exposure to the public and keep contamination to a minimum,&#8221; said Master Sgt. Stephen Peak, the EET representative for the 374th Security Forces Squadron. &#8220;That way, the fire department and medical personnel have a clear path, when they respond.&#8221;

The area had to be cordoned off and secured before cleanup procedures could start.

Security forces, however, were stretched thin because of another exercise-related scenario Tuesday night on the flightline, where a mock hijacking was attempted.

While neither situation was an actual event, he said a stressful training atmosphere allows emergency responders to refine their processes and identify shortcomings.