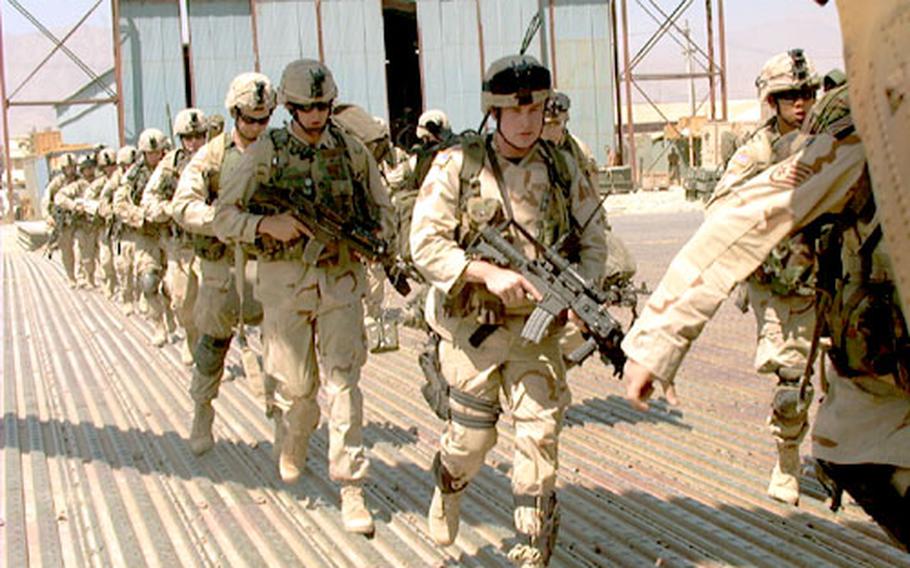 Quick Reactionary Force soldiers load onto a Chinook at the Bagram Air Base flight line Wednesday. The soldiers, from 10th Mountain Division’s Company A, 2nd Battalion, 87th Infantry Regiment, were put on alert and had to be ready to board the Chinook in 15 minutes. The alert turned out to be an exercise. (Rick Emert / S&S)

BAGRAM AIR BASE, Afghanistan &#8212; Bagram&#8217;s Quick Reactionary Force was alerted Wednesday for what turned out to be only an exercise. But these soldiers have learned to take the alerts seriously.

The first of the real missions included reinforcing a unit in contact with insurgents in the Shahi Kot Valley. But that mission was scrubbed because the unit didn&#8217;t need the reinforcements, Rasmussen said.

In the second mission, the QRF provided security for Special Forces troops who were searching a compound. As with most Special Forces missions, no further details could be released, Rasmussen said.

The practice alerts test the force&#8217;s reaction time, but that&#8217;s not the only training the troops get.

Ellis said he was psyched for the Special Forces mission.

The QRF element that goes out on a mission includes one or two Chinook helicopters, depending on how many platoons are needed; a Black Hawk carrying the command and control element; and Apache helicopters to provide mission security, Rasmussen said.

Each of the battalion&#8217;s companies has QRF duty for a month, and the company commanders usually rotate their platoons through the duty, Rasmussen said.

A platoon undergoes a week or more of training and must be certified by the company commander before it can assume the quick reactionary force duties, he added.

While &#8220;duty&#8221; implies something soldiers may be reluctant to perform, Ellis said he welcomes the challenge.