Drill prepares 21st TSC to get cargo from ‘fort to port’ 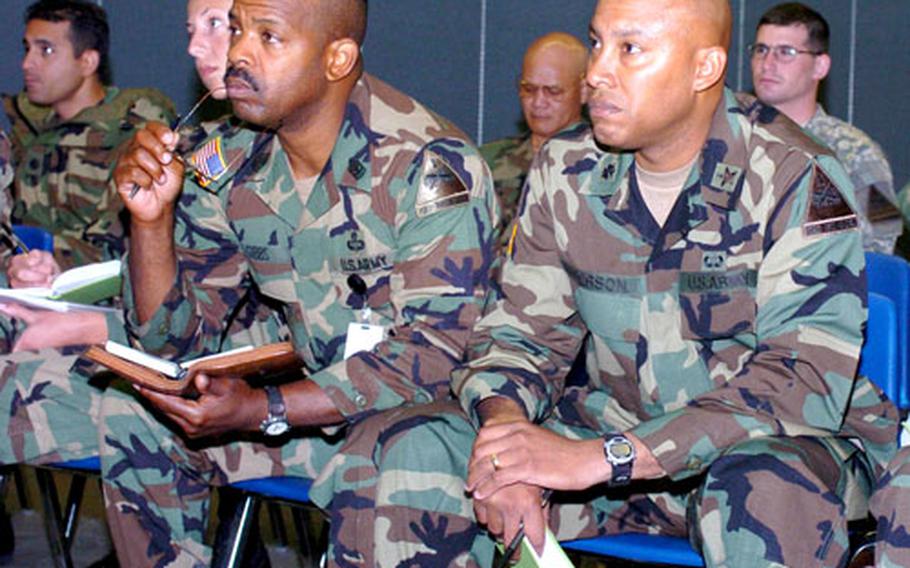 Sgt. Maj. Glenn Gibbs, left, and Lt. Col. Curtis Anderson, both of 1st Armored Division, listen to planners from the 21st Theater Support Command explain how USAREUR units and equipment will be transported to Afghanistan and Iraq during their next rotations. (Derrick Crawford / U.S. Army)

KAISERSLAUTERN, Germany &#8212; Coordinating the movement of roughly 6,000 pieces of equipment and thousands of soldiers from Europe to Iraq and Afghanistan is no small task.

Indeed, it is the proverbial logistical ballet.

Instead of pointe shoes and pink tutus, the performers in this ballet will be wearing boots and battle dress uniforms.

The 21st Theater Support Command based in Kaiserslautern is poised to orchestrate the movement &#8212; via land, sea, air and rail &#8212; of all equipment U.S. Army Europe units will need during their upcoming deployments, including the soldiers themselves.

From heaters to helicopters, the logisticians will coordinate and synchronize the transportation of equipment and troops across thousands of miles.

In preparation for the massive undertaking, a Rehearsal of Concept drill took place last week in Kaiserslautern. Leaders from units preparing to deploy attended the two-day drill hosted by the 21st TSC to get a better understanding of how their equipment will flow downrange.

&#8220;I want the units who are deploying to be able to come here and see exactly what the process is that they&#8217;re going to go through, from when they start loading up in their motor pool all the way through until they get on a plane to fly to central region,&#8221; said Maj. Joel Johnston, 21st TSC plans officer.

From late 2003 through the spring of this year, the 21st TSC has helped transport more than 30,000 vehicles and pieces of equipment for units deploying to, and returning from, downrange. As far as personnel, the 21st TSC has assisted in the deployment of more than 45,000 USAREUR soldiers since 2001.

&#8220;This allows different organizations to get together, synchronize, work out issues and leave on one sheet of music, understanding what everyone has to do in order to be successful,&#8221; Johnson said. &#8220;When it&#8217;s all said and done, we&#8217;re all ecstatic with the outcome, and everybody leaves on a positive note.&#8221;