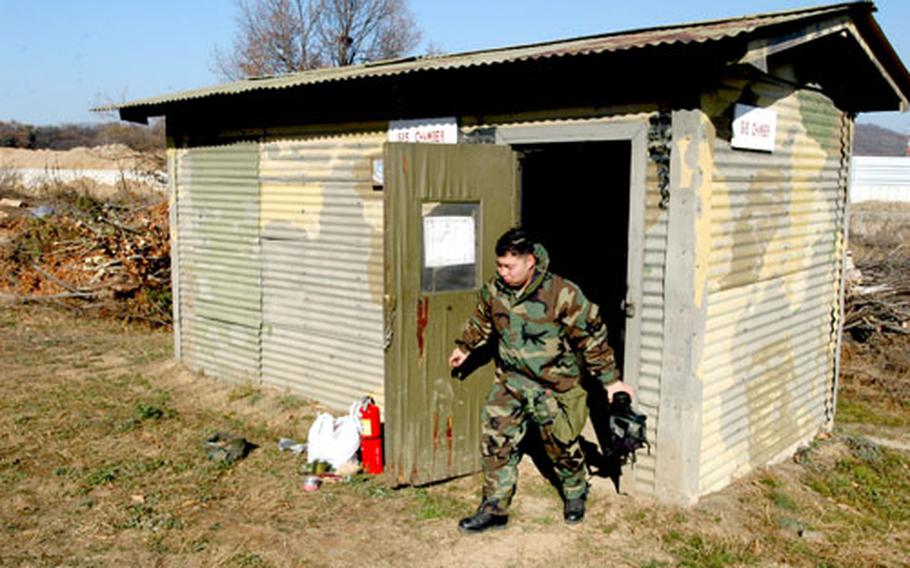 NORTH STAR RANGE, South Korea &#8212; There is nothing like waking up to a dose of fresh tear gas in the morning.

That&#8217;s what a group of about 40 2nd Infantry Division soldiers got when they showed up at North Star Range early Tuesday to learn how to protect themselves in the event of a nuclear, biological or chemical &#8212; NBC &#8212; attack.

Second ID NBC instructor Sgt. Mark Crosby, 22, of Midland, Mich., said the 40 were among up to 300 2nd ID soldiers scheduled to receive the training Tuesday. It involves donning protective gear inside a &#8220;smokehouse&#8221; full of CS, an extremely unpleasant but harmless variety of tear gas police sometimes use to control rioters.

NBC trainers from 2nd ID give weekly classes to soldiers, but the smokehouse training happens just once or twice a year.

&#8220;The goal of this training is to give soldiers confidence with their mask in the (gas) chamber,&#8221; said Crosby, of Headquarters Headquarters Company.

Before soldiers head into the smokehouse, they receive classes on how to clear and seal their masks and how to use Mission Oriented Protective Posture (MOPP) gear to protect themselves against an NBC attack.

Then they enter the smokehouse, where CS gas capsules &#8212; which simulate chemical weapons such as mustard gas, nerve gas and blood agent &#8212; are burning. They must break the seal on their mask and decontaminate their face with a special cloth, then reseal and clear the mask by blowing the air out of it while holding an outlet valve. Finally, everyone in the smokehouse removes their masks and sounds off with: &#8220;Second to None!&#8221; before exiting the building, he said.

Along with another 2nd ID NBC instructor, Spc. Brian Fields, 28, of Gallup, N.M., Crosby appeared eager to demonstrate just how unpleasant a dose of CS gas is. They were easily persuaded to head into the smokehouse for a photo shoot, then remove their masks to fully experience the gas in the building.

A few maskless moments later, the pair emerged from the darkness coughing and spitting.