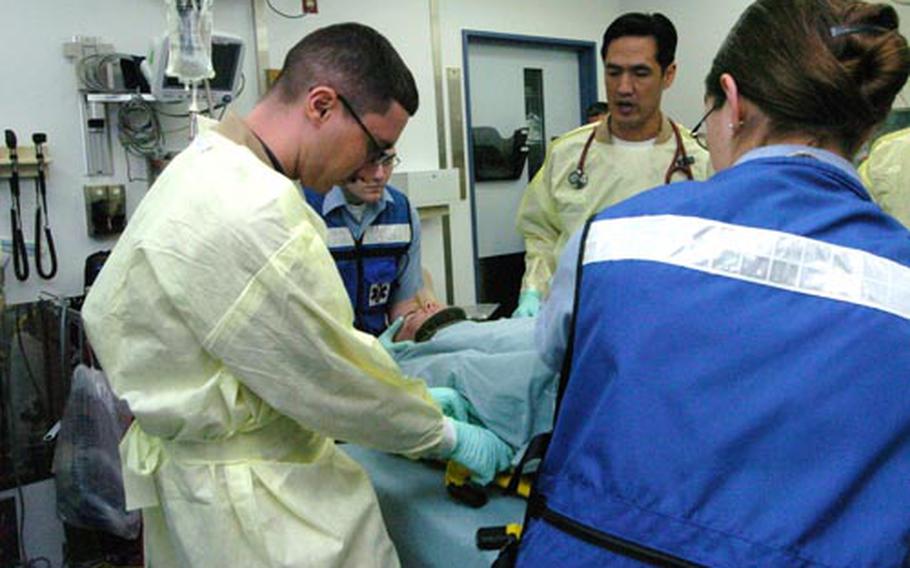 YOKOSUKA NAVAL BASE, Japan &#8212; The Navy showed Yokosuka city officials how it would respond to an ultra-low-level radiological injury during an emergency drill Tuesday.

Sailors aboard the nuclear aircraft carrier USS George Washington carried off a sailor who broke his leg and suffered minor steam burns while working in the ship&#8217;s propulsion plant area, according to the scenario.

The injured sailor, represented by a mannequin, also showed low levels of radioactivity in his hand &#8212; the equivalent of what naturally occurs in two bananas &#8212; according to a Navy handout.

"Unlike last year, the aircraft carrier is present, which will make the drill more realistic," Onuki said.

The Navy provided a briefing document regarding the drill but did not make a spokesperson available to answer questions at the exercise.

The document stated the Navy&#8217;s intent to show that it shares emergency information with the city quickly and that it promptly deals with any potential radioactive contamination.

The drill drew no protests from citizens groups that demonstrated against the carrier&#8217;s presence when it arrived Sept. 25.

Prior to the "injured sailor" being disembarked, radiological technicians set up a decontamination area on the dock. They measured radioactivity levels for the personnel who carried the injured sailor, as well as for the deck, dock and nearby vicinity.

The mannequin was taken by ambulance to U.S. Naval Hospital Yokosuka emergency room for treatment, where a live sailor took over the role.

Onuki said the drill aimed to ease anxiety among some Japanese citizens over the nuclear-powered vessel.

"Watching a well-organized drill will help to remove any anxiety the Japanese workers might hold, which will consequently and eventually contribute to removing fear among citizens in general," he said.

Meanwhile, the leader of a citizens group that has protested the carrier&#8217;s presence said he wants to see a larger-scale drill.

"We will accept a drill that assumes an accident of radiation exposure, but it is not enough," said Masahiko Goto, leader of a group that translates to "Citizens Group That Makes a Success of a Referendum on Homeporting of a Nuclear-powered Aircraft Carrier."

"The drill should be full-scale, assuming a more serious, worst-case scenario," Goto added.

The Navy has previously contended that its nuclear reactors are safe and that its procedures include safeguards against large-scale accidents.