Dress greens out, dress blues in for Army 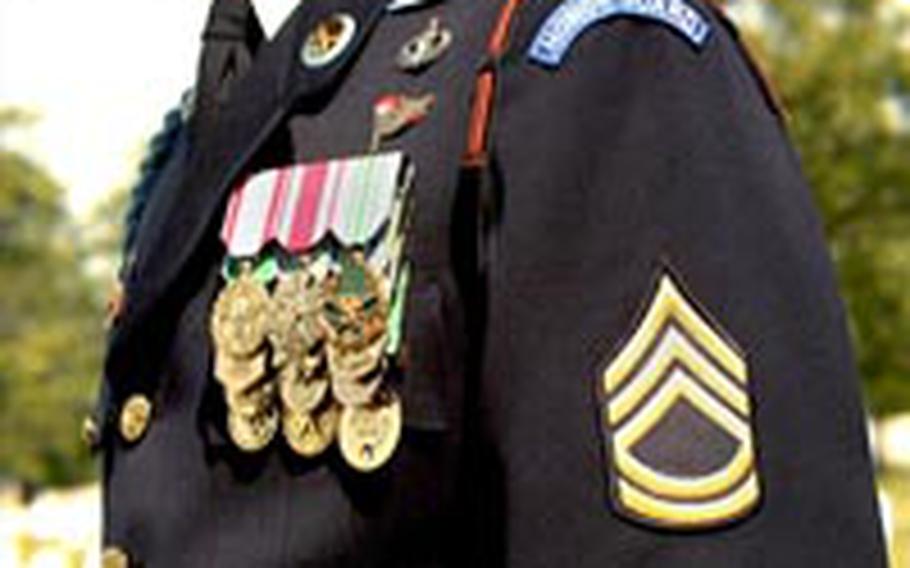 The decision was announced Wednesday in an all-Army message from Chief of Staff Gen. George Casey and Sgt. Maj. of the Army Kenneth Preston.

The greens and whites are being phased out over the next six years, with the Army mandating dress blues as the exclusive Class A uniform by 2014.

The Army began looking at the issue of consolidating its three existing dress uniforms into a single version two years ago, after Gen. Peter Schoomaker, then Army chief of staff, said he wanted to streamline the number of uniforms soldiers purchase and maintain throughout their career.

The dress blue uniform, which features a dark blue jacket and light-blue pants, has roots in U.S. Army uniforms that date back to the Revolutionary War, and is usually worn during ceremonies and formal occasions.

In contrast, dress greens date only to the 1950s, and are the Army equivalent of a civilian business suit.

Dress greens have never been popular with soldiers. Many criticize what they say is an un-military, suit-like appearance and a thick, all-polyester fabric that is sturdy but has an unflattering, stiff drape.

The tropic-weight dress white uniform, meanwhile, is so rarely worn that a soldier can easily spend an entire Army career without seeing it. It is passing into history largely unnoticed.

But the green-versus-blue debate has been lively and loud in Army circles, and service leaders took input from "hundreds of thousands of soldiers" before deciding to nix the dress greens and revise the wear of the dress blues, according to the message.

The result of the input is a new version of the dress blues that will be available in stores in winter 2009, the message said.

The Army decided not to adopt the gray shirt it had been considering.

New recruits will begin receiving dress blues, instead of dress greens, in their initial basic clothing issue beginning in 2010.

For the rest of the force, the Army will adjust clothing allowance stipends for enlisted troops to fund the purchase of dress blues, which previously have been an optional-wear item, purchased out of pocket.

Officers, meanwhile, will no longer be required to own and maintain both blue and green Class A uniforms.

Dress blues will now be worn differently than in the past. The Army will authorize combat service identification badges on the blue jacket, as well as overseas bars on the jacket sleeves of both officers and enlisted soldiers.

Enlisted troops can wear their unit insignia on the shoulder loops of the blue coat. Paratroopers, meanwhile, can wear black jump boots with the blue uniform.

The Army on Monday will launch a Web site, www.army.mil/asu, with more details of the uniform and its wear, spokesman Lt. Col. Lee Packnett said.