An overview of some of the displays at the show. (Michael Abrams / S&S)

An overview of some of the displays at the show. (Michael Abrams / S&S) 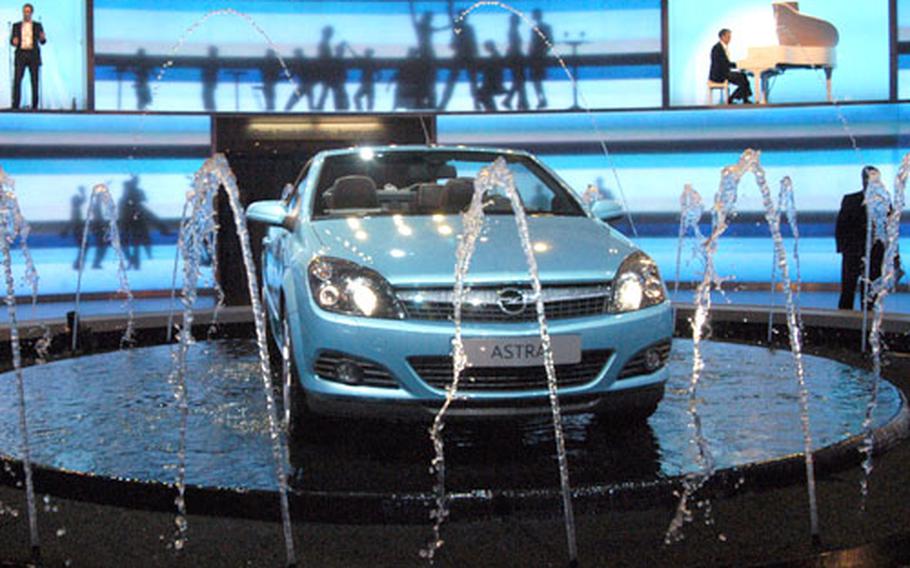 With a lot of show and live music, Opel unveiled its new Astra Twin Top at the show. The hard-top roof of the car folds away, turning it in to a convertible. (Michael Abrams / S&S) Keeping a BMW Z4 on display at the Frankfurt International Motor Show nice and shiney. The show opens to the general public on Saturday and runs until Sept. 25. (Michael Abrams / S&S)

FRANKFURT, Germany &#8212; If only you could saunter out the door at the end of the day with the keys to one of those snazzy new cars.

By design, auto shows aim to impress, to transport wistful visitors down an imaginary road of their liking. Too bad the dream comes to a screeching halt the moment they climb into their car and head home.

The chance to touch that dream arrives Saturday when the curtain rises on the 61st International Motor Show (IAA) in Frankfurt. Billed as the world&#8217;s largest auto extravaganza, the biennial event is open to the public daily through Sept. 25. This year&#8217;s theme is &#8220;Cars &#8212; Fascination.&#8221;

A visit to the Frankfurt auto show is a high-octane way to spend a day, what with all the sights and sounds under &#8212; count them &#8212; 10 roofs. All of the major U.S. players are present: Ford, General Motors and DaimlerChrysler. But that&#8217;s just the beginning.

Want to check out the mainstream foreign favorites? They&#8217;re all there, including Toyota, Volkswagen, Honda, Opel, Suzuki and KIA Motors.

Want to daydream &#8212; big time? Swing by and gawk at the latest that Lamborghini, Porsche, Maserati, Jaguar, Bentley and Mercedes-Benz have to offer.

&#8220;Porsche is no longer just a dream,&#8221; company representative Nasr Salman said unconvincingly Tuesday as he plugged the basic Boxster model, which retails for more than $50,000, major accessories not included.

At a peek preview for the press Tuesday, many of the automakers seemed to be following in the tire tracks of Mini Cooper and Smart, displaying hip, fun-looking compact cars. Music and models added to the allure.

In all, about 1,000 exhibitors from 44 countries have floor space to show off their goods. All segments of the auto industry are represented, from tire and sunroof manufacturers to roadside service companies.

Visitors to the Frankfurt auto show would be wise to wear comfortable shoes, and perhaps bring a bag or sack to hold the fistful of brochures that are available for the taking, though many companies provide free bags.

If nothing else, a trip to the Frankfurt fairgrounds (Messe in German) to see the 2006 car models and future concepts is a feast of metal, models and music, a sensory sensation that gets one&#8217;s own wheels turning upstairs.

And when the tour is done, many depart with fanciful thoughts of one day driving off into the sunset in a red Ferrari.

HOW TO GET THERE:

For more information, go to the Web site IAA.de, which offers a version in English.