Drawing a line in Sinjar's sand 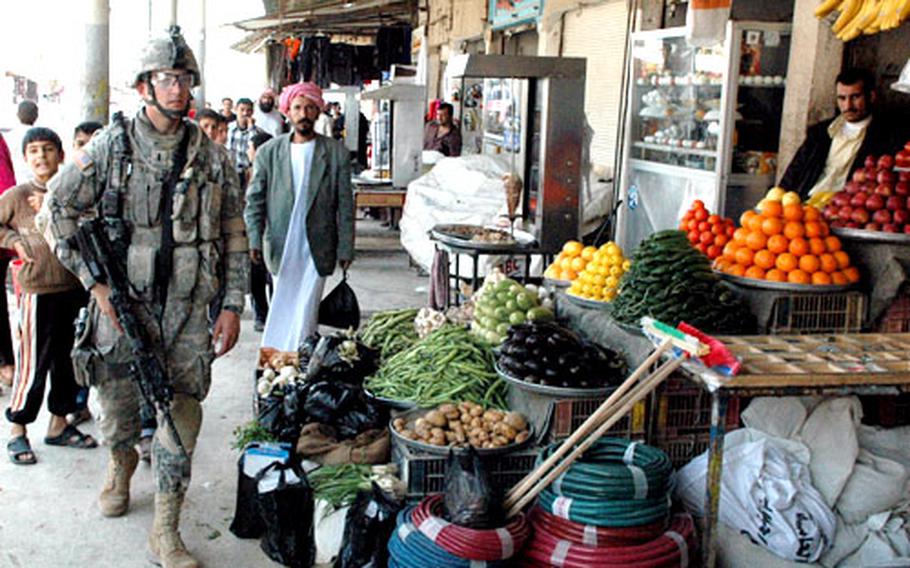 SINJAR, Iraq &#8212; For U.S. Army Capt. Aaron Dixon, patrolling the streets of this ancient town along the Asian silk route is as much about civics instruction as it is about soldiering.

Based in what has come to be one of Iraq&#8217;s more peaceful territories, the 30-year-old from Golden, Colo., often finds himself explaining to local leaders just what the U.S. Army can and can&#8217;t do for them.

Such was the case last week when more than 30 moqtars, or local village leaders, appealed to the officer to stop local sheep herders from allowing their flocks to graze on farmer&#8217;s wheat fields. Repeatedly, the moqtars insisted that since they were forbidden to carry AK-47 assault rifles in their fields, it was only the U.S. Army that could protect their crops from ravenous sheep.

While U.S. Army units elsewhere in Iraq are still struggling to secure cities and towns from insurgent attacks, soldiers from the Friedberg, Germany-based 1-37 are focused on the transition from coalition occupation to local governance.

The transition is not an easy one. Many municipalities have grown accustomed to the direction and cash offered by coalition forces, and are reluctant to trust the newly established ministries to care for their district &#8212; a unique blend of Yezidi, Kurdish and Arab people in northern Iraq&#8217;s lush bread belt. The battalion&#8217;s area of operations is roughly the size of Connecticut.

Sinjar is a very different place from most of Iraq. While not as secure or self sufficient as the northernmost Kurdish areas of the nation, insurgent attacks are rare here.

As a result, Sinjar is enjoying a commercial boom as residents from nearby Tal Afar and other areas hit by insurgent activity travel to Sinjar to do their shopping. The area also has seen a tremendous amount of construction, as new homes and retail buildings are being thrown up at a rapid pace.

The city and surrounding area, which has a population of roughly 65,000, is essentially where the rest of the country would like to be: reasonably secure and on the cusp of managing its own affairs.

The trouble is, local officials are not eager to see America cut its apron strings and stop the flow of cash and projects.

Owing to the area&#8217;s strong Kurdish and Yezidi population &#8212; groups that were persecuted by Saddam Hussein &#8212; city officials are loathe to trust Iraq&#8217;s Baghdad-based government. They charge that government officials are more likely to skim cash and supplies than they are to send it along to the northwest.

Despite its comparative calm, the area is not immune to the effects of Iraq&#8217;s insurgency.

A lingering fuel shortage, caused by attacks on fuel shipments and the oil infrastructure, have given rise to a thriving black market in gasoline &#8212; a trade that U.S. military officials fear generates cash for the insurgency.

Residents also complain that insurgents from Tal Afar are attempting to move into the city and stage operations there. U.S. commanders worry, too, that insurgents would like to make a point and show residents that the city is not immune to their attacks.

And finally, the area&#8217;s complicated ethnic composition will remain a potential flashpoint for conflict. All three groups in the area &#8212; Kurds, Arabs and Yezidis &#8212; lay claim to the picturesque Sinjar Mountains, which dominate the area&#8217;s landscape.

At the moment, however, the area remains calm.

Battalion commanders say that they have the 3rd Armored Cavalry Regiment to thank for helping maintain peace in their area of operations. The 3rd ACR left the region more than three months ago.

They also have high praise for the training and instruction they received at Hohenfels prior to deploying from Germany.

Dixon said that initially he believed the training was impractical, because it focused on politicking more than it did on battling insurgents.