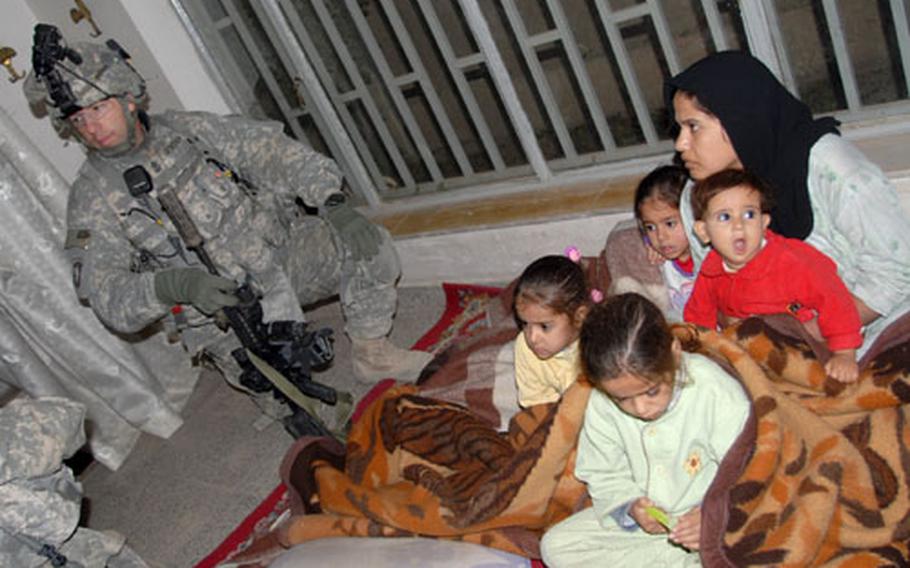 BAGHDAD &#8212; A raid by 2nd Cavalry (Stryker) Regiment soldiers netted an alleged al-Qaida in Iraq operative who soldiers said was linked to the May 12 abduction of three 2nd Brigade, 10th Mountain Division soldiers.

The three were taken in an attack that killed four other U.S. soldiers and an Iraqi soldier. The body of one of the missing soldiers, Pfc. Joseph Anzack Jr., was discovered in the Euphrates River in late May but the Army is still searching for the other two soldiers &#8212; Pvt. Byron Fouty, 19, of Waterford, Mich., and Spc. Alex Jimenez, 25, of Lawrence, Mass.

Dragoons from the 2nd Cavalry Regiment&#8217;s Company E, 2nd Squadron, raided several houses in Baghdad&#8217;s Hadar neighborhood early Monday morning after a tip that Abu Raquyyah was in one of them.

Raquyyah is linked to an al-Qaida in Iraq cell believed responsible for the soldiers&#8217; abduction, according to Maj. Christopher Davis, 2nd Squadron operations officer.

Company E soldiers moved by moonlight to a group of houses, only a short walk from their base at Combat Outpost Blackfoot, then smashed their way into several buildings, clearing rooms as they went.

Raquyyah was unarmed and surrendered without a fight when soldiers entered the house he shared with a woman and four children.

Company E 1st Sgt. Eric Geressy said informants provided the tip that Raquyyah recently moved into the area from the town of Yusafiyah, near where the soldiers were abducted.

Geressy said that, according to the informants, Raquyyah &#8212; also allegedly responsible for bomb attacks on coalition forces &#8212; held several meetings with other insurgents in Hadar in an effort to re-establish al-Qaida there.

U.S. forces largely destroyed al-Qaida in the area during a series of battles in September and October, he said.

&#8220;They come through the south into Baghdad. This is the natural access as they come into the city. They avoid the Shia population, where the JAM (Mahdi Army) and Badr Corps work, and National Police checkpoints,&#8221; he said.

It&#8217;s not clear if or why al-Qaida in Iraq would want to re-establish itself in Hadar, but members may feel threatened by Iraqi security volunteers who man checkpoints and guard critical infrastructure all over Baghdad, and have nowhere else to go, Davis said.

&#8220;He (Raquyyah) could have been in transit on his way somewhere else. The positive sign is that we had local nationals giving us tips,&#8221; he said.

Volunteers are providing a lot of tips on the whereabouts of insurgents. Combat outposts such as Blackfoot also are helping soldiers gather information on insurgents&#8217; movements because the U.S. military has a permanent presence in places such as Hadar, he said.

On Nov. 16, soldiers detained another man suspected in the soldiers&#8217; abductions.

Ibrahim Abid Aboud al-Janabi was detained after his sister, who says her family imprisoned and tortured her, told soldiers that al-Janabi mutilated and buried the two soldiers&#8217; remains in a sand pit a quarter of a mile from their home near Owesat, southwest of Baghdad.

Troops have dug for remains and used search dogs and imaging equipment, but no official word has been released on their results.