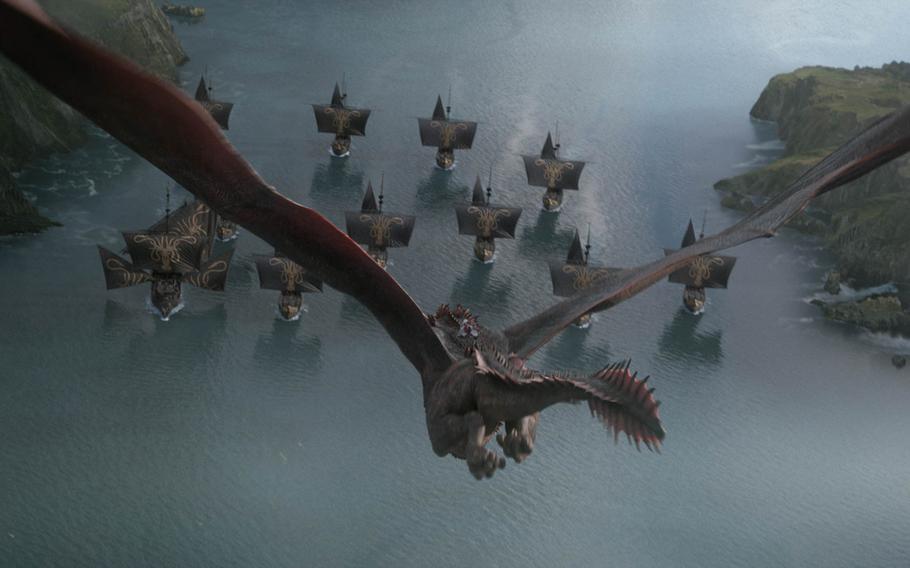 Daenerys Targaryen flies a dragon toward a fleet of ships during a scene of HBO's ''Game of Thrones.'' Some soldiers believed this was a risky move. (Courtesy of HBO)

Daenerys Targaryen flies a dragon toward a fleet of ships during a scene of HBO's ''Game of Thrones.'' Some soldiers believed this was a risky move. (Courtesy of HBO) 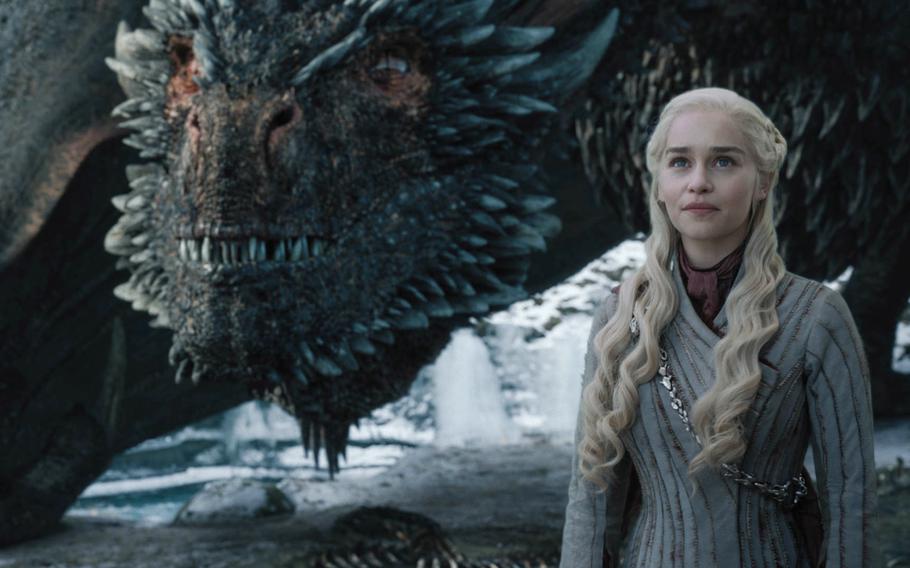 Emilia Clarke as Daenerys Targaryen in HBO's Game of Thrones next to her dragon, Drogon. Soldiers and Marines who spoke with Stars and Stripes had different opinions in how dragons should have been used tactically in the series. (Courtesy of HBO) 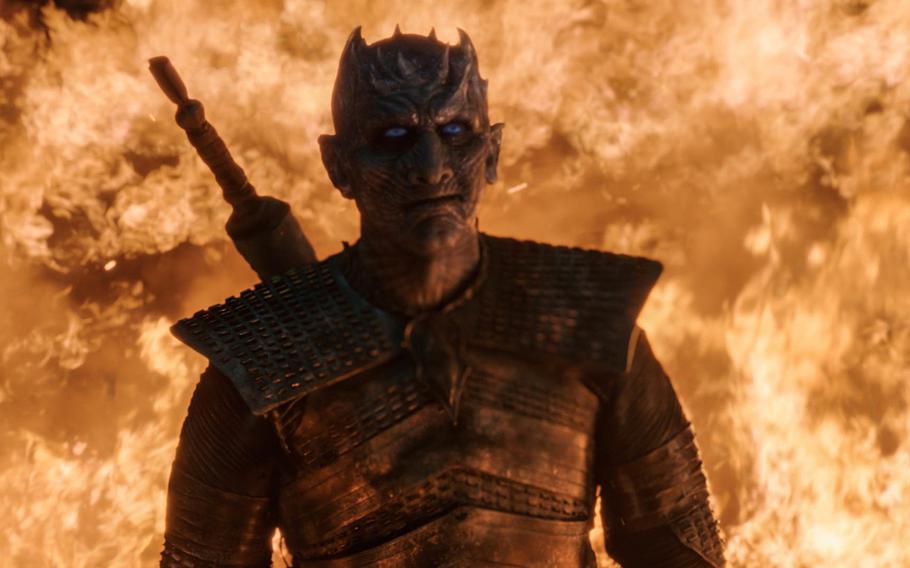 The Night King smiling at the Battle of Winterfell on HBO's ''Game of Thrones.'' (Courtesy of HBO) 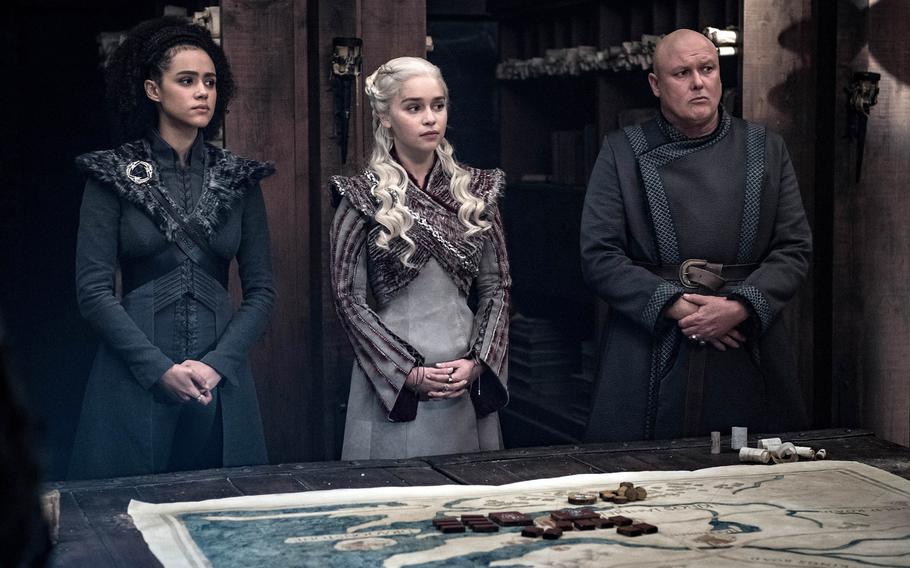 GRAFENWOEHR, Germany — As it draws to a close, HBO’s “Game of Thrones” series has drawn myriad opinions from some of its most devoted fans for its narrative choices, but U.S. military troops have fixed their attention on the medieval fantasy show’s battle strategy.

The mostly goodIn the eight-season series, several factions waged war to win the “Iron Throne,” the seat of power in the land of Westeros.

Before the final episode, Queen Daenerys Targaryen appears triumphant, with the help of her ally Jon Snow, an army of eunuch soldiers and her last of three fire-breathing dragons.

Using dragon fire as close air support to torch the Iron Fleet as an opening gambit during last week’s Battle of King’s Landing was sound strategy, soldiers and Marines who spoke to Stars and Stripes this week said.

This battle was one of the better planned engagements of the recent seasons, at least until Daenerys committed large-scale war crimes by burning the city’s population alive.

“Minus Dany’s slip into madness, the Battle of King’s Landing was overall so much better than the Battle of Winterfell,” said Marine Staff Sgt. Kenneth Trotter, referring to a fight against the undead two episodes earlier. “Dany did the strategically sound thing and took out the Iron Fleet and King’s Landing’s [anti-dragon gun] scorpions.”

“Did she not learn from the last time when her dragon was killed?” Brabo asked. “However, she showed she had taken the knowledge gained about the weapon system and applied it to her tactics as she took them out one by one.”

Distracting the mercenary army outside the city’s gate with an aerial attack from the rear was “a smart gamble that paid off,” Brabo said.

Her foe’s surrender in the face of near-certain defeat was an appropriate decision, even if the Mother of Dragons and her fighters ultimately slaughtered the surrendered troops, Trotter said.

“That’s sound strategy, as Dany demonstrated in the previous season that she would spare her foes if they bent the knee after she decimated their forces, after the Lannisters’ victory at Highgarden,” he said, referring to an earlier season’s victory.

The mostly badThe fight against the living dead, known as wights, at the Battle of Winterfell in episode three of the current season was poorly fought for many reasons.

“They pretty much took every single aspect of warfare and threw the book out of the window,” Trotter said. “The one good thing they did, by my estimate, was having Theon [Greyjoy] with Ironborn soldiers, who could actually see what they were fighting against, protecting Bran [Stark].”

The Ironborn are a Viking-like people who at times fought against the protagonists, though a group of them stayed behind to protect Bran, due to his crucial role in the battle.

Everything else about the battle was infuriating, Trotter said.

Sending thousands of lightly armed cavalry into the darkness without any reconnaissance to tell them what they were charging into was deemed universally dumb.

The battle’s “most egregious error” in the defense of Winterfell was a lack of a plan to continually slow down the enemy, said Army 1st Lt. Robert Bannon, a platoon leader with the Army’s 2nd Cavalry Regiment.

“This could’ve been achieved with the lateral dispersion of positions and the integration of more obstacles,” he said.

A solid defense would have used obstacles across the battlefield and tied them in with indirect fires like catapult projectiles, flaming arrows or dragon fire, he said.

“Furthermore, the army of the living didn’t take advantage of their opportunity to significantly attrit the enemy when the obstacle achieved its effect,” he said of the trench of fire used in the castle’s defense. “They simply stared until the wights brainstormed an orthodox way to breach the obstacle.”

The battle stands in contrast with the expert defense of King’s Landing during the second season, Trotter said.

“The Battle of the Blackwater is the most well planned-out [siege defense] in my eyes,” Trotter said. “Tyrion [Lannister’s] use of wildfire and luring in Stannis [Baratheon’s] fleet was well thought out,” referring to the use of a “Greek fire”-like chemical compound the defenders used to burn many of the attacking ships.

Weapon and warrior comparisonsSoldiers and Marines disagreed most on the role of dragons.

“The dragons are most comparable to Apache helicopters,” Bannon said, claiming the killing power matches the close air support the U.S. Army’s helicopters could provide.

At Winterfell, Jon and Daenerys should have used the dragons as soon as they saw wight forces to thin their numbers before they reached the first echelon of spearmen, Bannon said.

“This reduces the wights to a size that the dismounts can effectively engage,” he said.

Trotter, however, sees the dragons as more comparable to nuclear weapons, since they’d been used by previous Targaryens to war-stopping effect.

“Siege warfare against them is useless, as the Battle of Winterfell and King’s Landing are both perfect examples of how powerful dragon fire is,” he said.

Trotter also saw the Marine Corps as a modern equivalent to the disciplined force of eunuch slave soldiers known as the Unsullied. He cited “their instant obedience to orders and a willingness to fight against insurmountable odds.”

Bannon didn’t specify a service branch, but said the Unsullied were “defined by unparalleled discipline, lethality and resilience. The Unsullied are most comparable to light infantry units.”

The Dothraki horsemen most closely resemble the Army’s fast-moving mechanized infantry, he said, though they lack the firepower of one of his own Stryker armored vehicles.

What the troops agreed on, whether it was Jon being goaded into a fight with Ramsay Bolton during the Battle of the Bastards or Daenerys losing her cool and burning down her new capital city, was that emotions are best left off the battlefield.

That being the consensus, Daenerys’ recent atrocities do not bode well for her rule.