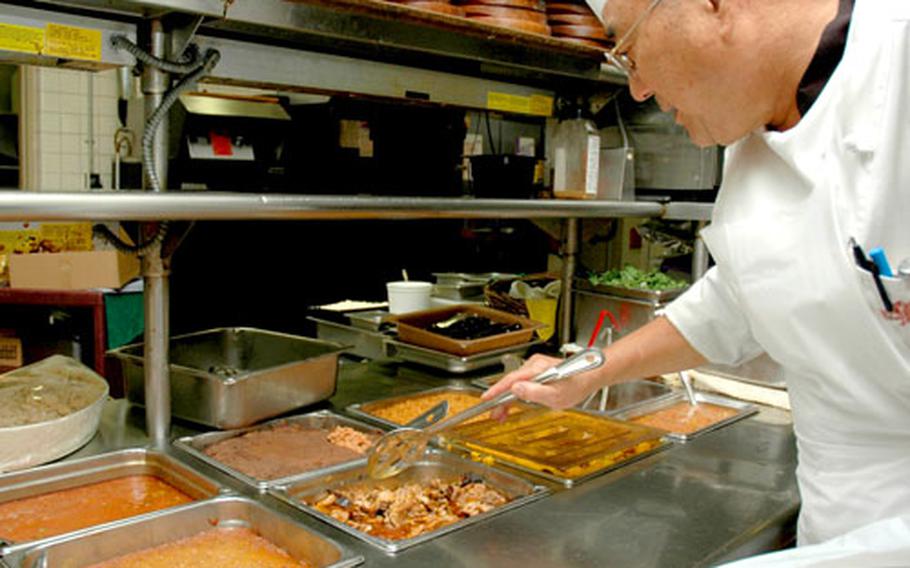 Steve Park, a sous chef, stirs pulled pork in the kitchen of The Oasis, the Mexican restaurant at the Dragon Hill Lodge. Staff costs are the No. 1 expenditure at the resort. (Teri Weaver / S&S)

Steve Park, a sous chef, stirs pulled pork in the kitchen of The Oasis, the Mexican restaurant at the Dragon Hill Lodge. Staff costs are the No. 1 expenditure at the resort. (Teri Weaver / S&S) 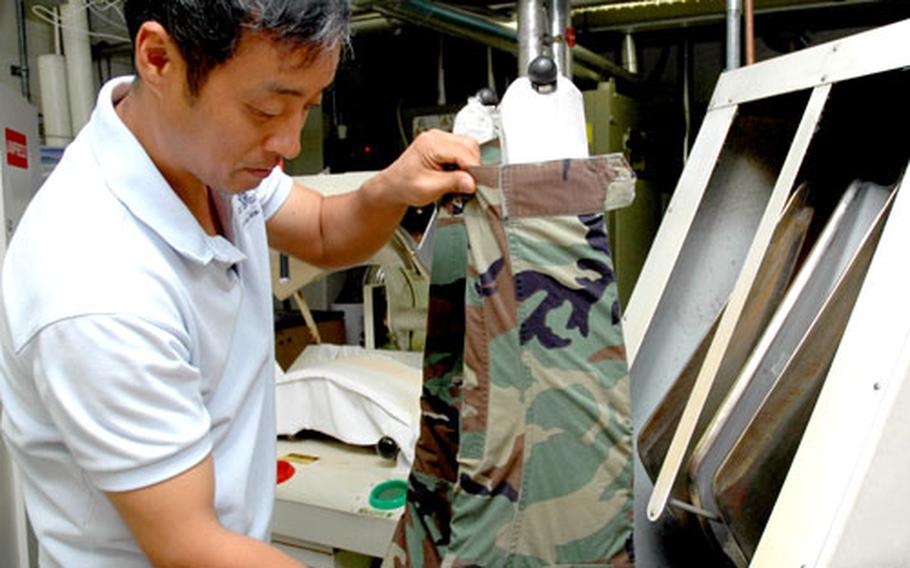 Yi Jong-Ho, a dry-cleaning attendant at Dragon Hill Lodge, demonstrates the equipment used to press a military uniform. The hotel’s dry-cleaning income dropped by $45,000 a year after the Army began using Army Combat Uniforms, which do not need ironing. (Teri Weaver / S&S)

The military&#8217;s hotel in Seoul requires more money and more planning than its peers elsewhere when it comes to delivering everyday services, according to Richard Gorman, the chief operating officer for the U.S. Army&#8217;s Community and Family Support Center.

Gorman says the Dragon&#8217;s staff already had made some adjustments, such as cross-training workers and mass-ordering certain foods.

In South Korea, for example, all produce, meats, staples and dairy come only once a week and must be ordered almost six weeks in advance. The food staff orders slabs of beef to carve into steaks and 55-gallon drums of barbecue sauce, all to cut down on costs, hotel workers said.

In the past five years, the dollar&#8217;s value against the won has dropped 27 percent. The Dragon pays two-thirds of its 475 workers in won, but its income is all in dollars.

That growing cost means each plate of food served at the Dragon costs, on average, $8.60, and that&#8217;s before paying for the food, he said.

In the past year, the Army has switched from battle dress uniforms, which needed ironing, to wrinkle-free Army combat uniforms. That change over the year sank receipts at the Dragon&#8217;s dry cleaners by 43 percent, or $45,000, Gorman said. And the new cloth boots took shoe-shining revenues from $8,000 a month to $1,000 a month.

None of which changes the fact that, come checkout time, it can be considerably cheaper to fly a group of soldiers for a weeklong meeting to The New Sanno hotel in Tokyo than to the Dragon Hill Lodge. It&#8217;s not the soldiers&#8217; money but the unit&#8217;s travel budget that can take the hit.

But it will get harder to fill rooms as the military relocates further south of Seoul and decreases to 25,000 servicemembers in South Korea, he acknowledged.