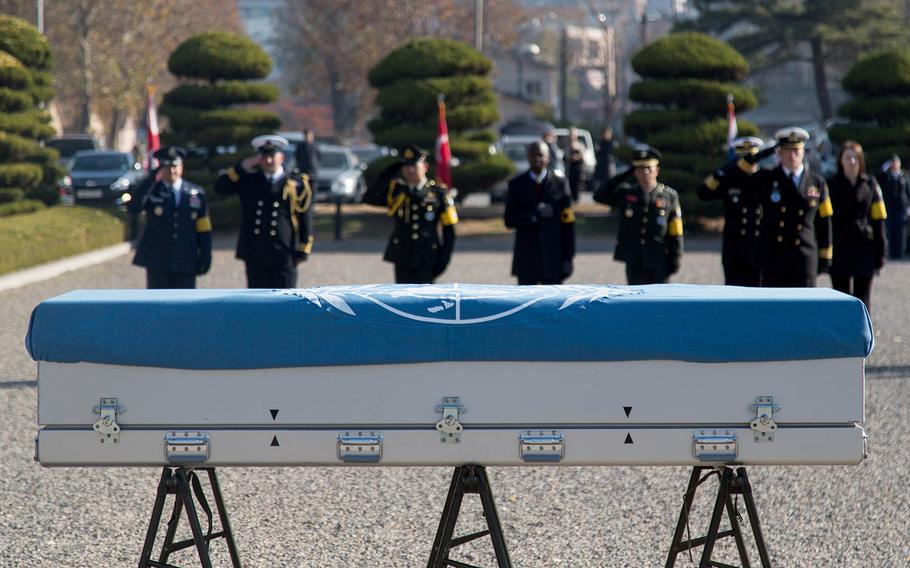 A casket holding the remains of an unidentified servicemember is covered with a United Nations flag during a ceremony at Yongsan Garrison, South Korea, Tuesday, Nov. 21, 2017. (Marcus Fichtl/Stars and Stripes)

A casket holding the remains of an unidentified servicemember is covered with a United Nations flag during a ceremony at Yongsan Garrison, South Korea, Tuesday, Nov. 21, 2017. (Marcus Fichtl/Stars and Stripes) 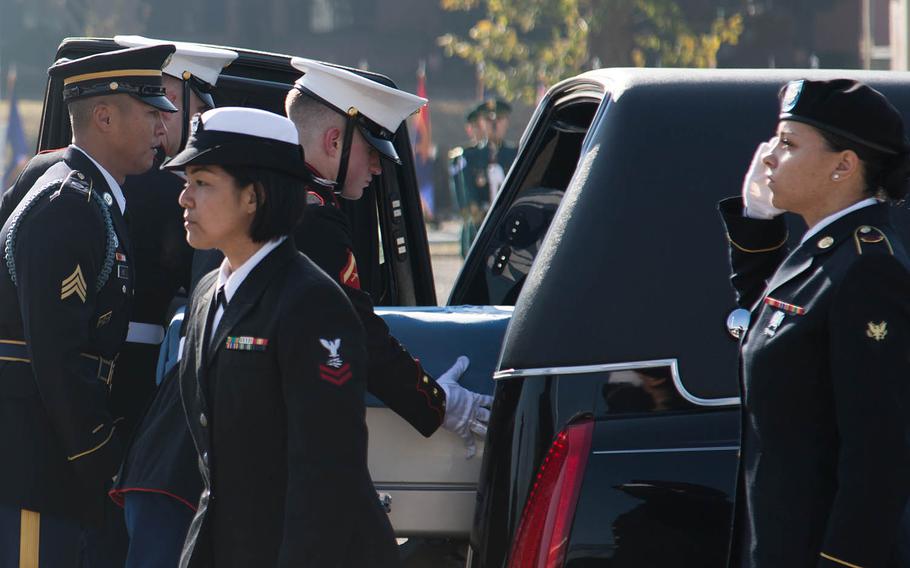 The remains of an unidentified servicemember from the Korean War are placed into a hearse at Yongsan Garrison, South Korea, Tuesday, Nov. 21, 2017. (Marcus Fichtl/Stars and Stripes)

YONGSAN GARRISON, South Korea — United Nations Command has sent the remains of an unknown British servicemember killed in the Korean War to the United States to find out whether he may actually be an American.

American and British pallbearers carried the servicemember’s casket, which was draped with the blue UN flag, in front of U.S. Forces Korea headquarters during a send-off ceremony Tuesday at Yongsan Garrison in Seoul.

The remains – disinterred with the British government’s permission from an unmarked grave at Busan’s United Nations Memorial Cemetery – were later flown to Hawaii for identification at the Defense POW/MIA Accounting Agency.

“The remains of this servicemember were turned over by North Korea in 1995,” DPAA deputy director Rear Adm. Jon Kreitz said at Tuesday’s ceremony. “However, the technology at the time was not advanced enough to allow identification, and the soldier was buried as an unknown.”

More than 20 years later, as evidence pointed toward the remains being American, a discussion began with the British government to try once again to identify them.

Charles Hay, the United Kingdom’s ambassador to South Korea, said it was his country’s responsibility to properly identify the fallen regardless of nationality.

“As allies and the greatest of friends, providing the deceased the dignity in death they so richly deserve is a victory for both of our nations” he said at Tuesday’s ceremony.

“The UK will continue its efforts with the U.S. and [South] Korean authorities to identify and recover the remains of our missing,” he added.

More than 1,000 British troops gave their lives in defense of South Korea, Hay said. Of those, 885 are interred at Busan while 295 still have no known grave.

If identified as an American, this will be the fourth such successful repatriation in the last year and a half, Kreitz said. The other three sets of remains were found in conjunction with the South Korean government at former battlefields of the Korean War, which ended with an armistice rather than a peace treaty.

About 28,500 U.S. troops remain in South Korea to enforce that armistice, most within a 100 miles of the Demilitarized Zone.

As of Oct. 23, 2017, there are still 7,718 U.S. servicemembers unaccounted for from the Korean War, according to DPAA’s website. Most are thought to be in North Korea.