Marines from Marine Corps Barracks Washington, D.C., place 1st Lt. Alexander Bonnyman Jr. near his final resting place at Berry Highland Memorial Cemetery in Knoxville, Tenn., on Sept. 27, 2015. Bonnyman was killed in the Battle of Tarawa in 1943. His remains were discovered 72 years after he was buried there. (Sara Graham/U.S. Marine Corps photo)

Marines from Marine Corps Barracks Washington, D.C., place 1st Lt. Alexander Bonnyman Jr. near his final resting place at Berry Highland Memorial Cemetery in Knoxville, Tenn., on Sept. 27, 2015. Bonnyman was killed in the Battle of Tarawa in 1943. His remains were discovered 72 years after he was buried there. (Sara Graham/U.S. Marine Corps photo) 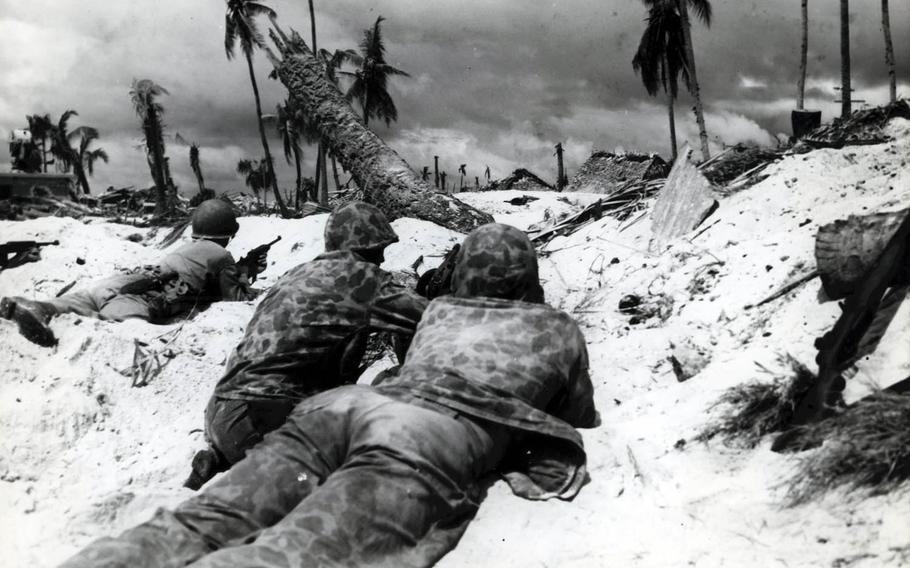 After heavy bombardment, the 2nd Marine Division hit the beaches of Betio Island in the Tarawa Atoll, Nov. 20, 1943. They were met by heavy Japanese resistance, which included thousands of troops in a network of fortified pillbox bunkers and concrete blockhouses. (Courtesy of the U.S. Marine Corps) 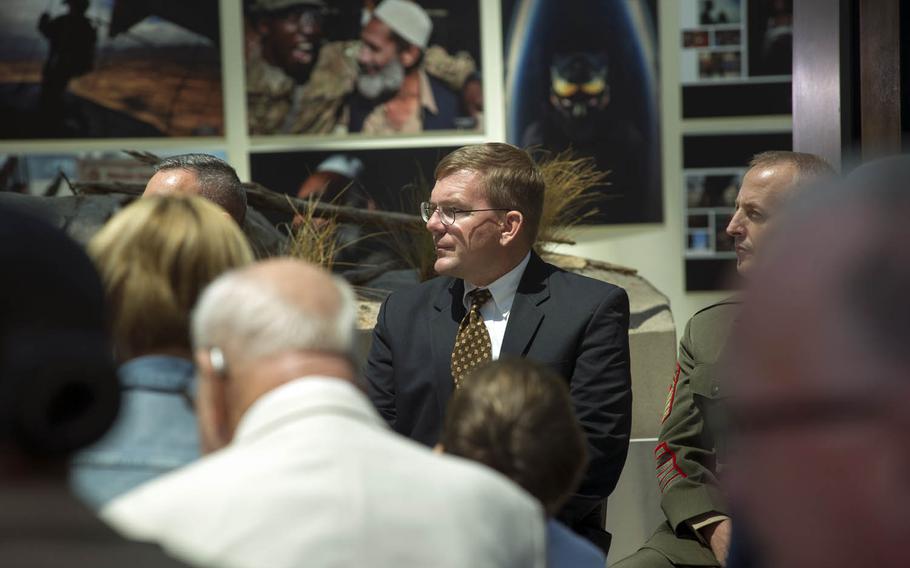 Mark Noah, founder and executive director of History Flight, receives the title of honorary Marine during a ceremony at the National Museum of the Marine Corps, Triangle, Va., July 24, 2015. With Noah at the helm, History Flight has repatriated the remains of several hundred Marines and sailors deemed unrecoverable that were killed in action during the Battle of Tarawa of World War II. (Kathy Reesey/U.S. Marine Corps photo)

Since this agency was formed in January 2015, it has experienced a steady stream of successes, the biggest being identifying the remains of 34 Marines on the island of Betio in the Tarawa Atoll, including Medal of Honor recipient Marine 1st Lt. Alexander Bonnyman Jr.

However, a previously unreleased report from August 2015 by a partner in that mission says the fledgling DPAA was still hampered by bureaucratic problems that plagued its predecessors.

In 2014, the embattled former agencies were ordered by the Defense Department to reorganize, after a damning internal review. The head of DPMO at the time, W. Montague Winfield, resigned in November.

The new merged agency became official in January 2015. During and after the reorganization, no one was fired from the agency, including the Central Identification Laboratory staff. Some employees, however, were reassigned.

“The new leadership at DPAA is awesome, and the old bureaucrats are trying to stop the progress,” History Flight founder Mark Noah wrote in an email to Stars and Stripes after providing a copy of the report.

Between 2006 and July 2015, the group found and repatriated more than 120 Marines and servicemembers who were lost on the island after heavy fighting with the Japanese during World War II. It has been the greatest accounting success story to date.

However, the report states that the recovery would not have happened if DPAA officials had their way.

History Flight’s path to Betio was charted Nov. 20, 1943, in the Tarawa surf. After heavy bombardment, the 2nd Marine Division hit the beaches of the island. They were met by heavy Japanese resistance, which included thousands of troops in a network of fortified pillbox bunkers and concrete blockhouses.

Over 4,000 Japanese were killed, along with more than 1,000 Marines, in three days of heavy fighting. Hundreds of Marines were hastily buried near where they fell and remained lost for decades, long after the island-hopping campaign ended with the atomic bombings of Hiroshima and Nagasaki.

Noah and his team committed themselves to finding the lost Marines, whose graves were now under warehouses and in people’s yards in the tiny, unknown Pacific islands. They accepted donations and used personal money to fund their work.

They acquired firsthand accounts of the discovery of remains from locals, and used cadaver dogs and ground-penetrating radar. They accumulated convincing evidence about the location of lost cemeteries and scores of Marine remains. In June 2011, they took their findings to JPAC.

“At this meeting with History Flight and the 2nd Marine Division association, Central Identification Laboratory management made it quite clear that they were not interested in collaboration of any kind, and that their opinion on the use of cadaver dogs and ground penetrating radar for clandestine grave finding was very negative,” the report states. “The 11 Tarawa sites, in which History Flight recovered a minimum number of 120 American individuals, were rejected by the CIL management.”

Despite giving History Flight the cold shoulder, JPAC’s longtime deputy to the commander for external relations and legislative affairs, Johnie Webb, who is now deputy director of outreach and communication, dispatched forensic anthropologist Jay Silverstein, the current geographic information systems lead with the Asia-Pacific directorate, to Tarawa in October 2011, the report states. Silverstein listened to the evidence and “logically” recommended sites for excavation.

A second DPAA team arrived a year later to test the sites, the report states. Based on research, History Flight recommended that JPAC dig the 8-by-8-meter project area at one site to a half-meter below the water table.

Bill Belcher, then CIL deputy director and now DPAA’s deputy lab director in Hawaii, dug a 2-by-1 meter “L”-shaped hole to 75 centimeters, the report states, which was more shallow than recommended. Even so, he found human remains, a Marine canteen and a poncho. He told History Flight officials that the remains belonged to a Marine who had been partially recovered and identified. He declared the site empty.

“Dr. Belcher then closed the project area with no further investigation despite the fact that the CIL [standard operating procedure manual] specified that, upon encountering human remains, a 1-meter buffer should be dug in all quadrants from where they were found,” the report states.

“Dr. Belcher’s statement was made while ironically standing on top of the grave of Individual Number Six, who has since been identified as Robert Carter Jr. Ironic, in that JPAC’s [test] team missed Marine Carter’s remains by only 10 centimeters. Had Dr. Belcher been more diligent and less condescending, he could have realized the veracity of the History Flight recommendations.”

History Flight found an unexploded hand grenade in JPAC’s back dirt that had been discarded, a clear violation of unexploded ordnance and public safety protocols, according to the report.

Belcher currently splits his time between the agency and the University of Hawaii West Oahu, where he is an assistant professor of historic archaeology.

Belcher is a senior forensic anthropologist with the agency “and our most experienced archaeologist,” DPAA spokesman Army Maj. Jessie Romero wrote in a statement to Stars and Stripes. Belcher’s LinkedIn page says he was responsible for establishing the modern-day training procedures at DPAA.

“I was responsible for the training regimens of the new DPAA, particularly including the proficiency and competency training for the forensic anthropological and archaeological staff,” he wrote.

Noah said History Flight officials went ahead with the recovery efforts despite Belcher’s decision. “It happened that way at all the sites where we recovered more than 100 U.S. servicemen,” he wrote in his email. “We took them to the sites in 2012 and 2013 and they dug there and told us we were full of [expletive], and we went back in 2013-2017 and recovered more than 100 American individuals.”

DPAA did not comment on specific allegations about the 2012 excavation. Officials did say that History Flight had signed a contract with them in September 2015 for field investigations and recovery efforts on Tarawa. They declined to provide details.

“DPAA is appreciative to History Flight Inc. and their partnership efforts to recover fallen Marines,” Romero said. “Partnerships such as these provide a cost-efficient and effective mechanism for DPAA.”