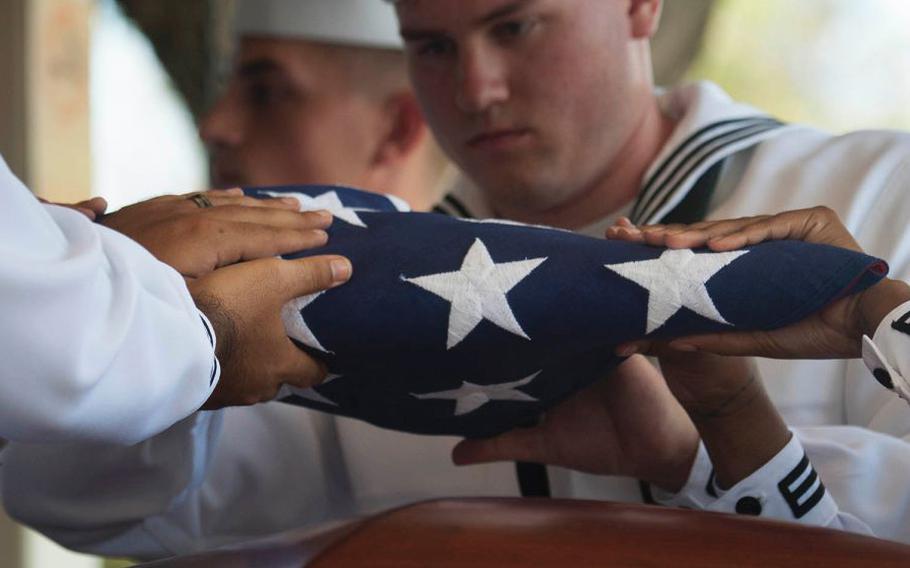 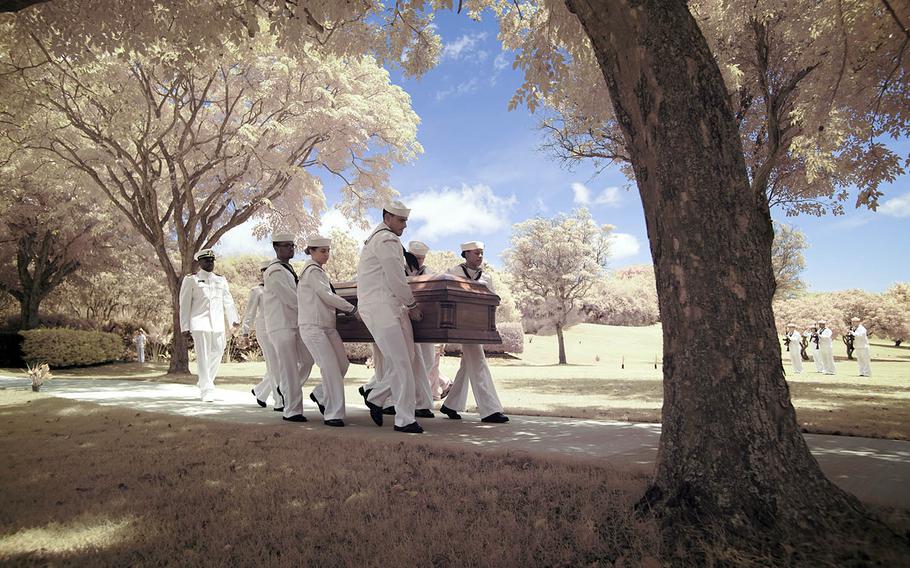 Navy Region Hawaii sailors fold a flag during the funeral of Petty Officer 1st Class Arthur Glenn, who died aboard the USS Oklahoma during the Pearl Harbor attack, at the National Memorial Cemetery of the Pacific, Hawaii, Aug. 21, 2018. (Seth Coulter/U.S. Navy)

The Defense POW/MIA Accounting Agency recently celebrated a significant milestone as the 100th USS Oklahoma sailor was laid to rest after the agency identified and returned the remains to the family for burial.

Petty Officer 1st Class Arthur Glenn of Fort Wayne, Ind., was laid to rest Tuesday at the National Memorial Cemetery of the Pacific — also known as the Punchbowl — in Hawaii, a DPAA statement said.

His burial came nearly 77 years after the surprise Japanese attack at Pearl Harbor that claimed 2,403 American military and civilian lives, including 429 crewmembers from the Oklahoma, according to the Navy.

The battleship was struck by multiple torpedoes and quickly capsized, leaving 388 of its personnel unidentified, the DPAA statement said.

In 2015, 60 caskets containing unknown comingled remains were disinterred. As of this week, 158 servicemembers from that group have been identified.

“A promise was made by our Nation that we would provide the fullest possible accounting for our missing heroes and return them to their families,” DPAA director Kelly McKeague said in the statement. “Our agency remains steadfast in completing that task and we are extremely humbled to provide answers and some solace to the Glenn family.”

Glenn was born Dec. 7, 1889, to a Scottish father and an Irish mother, the 10th of 11 siblings, according to The Cumberland Times News of Maryland. He enlisted on April 12, 1917, as an apprentice seaman, and served for the duration of World War I. He remained in the Navy and served for 24 years in both the Atlantic and Asiatic fleets.

His remains were repatriated to his great niece and nephew, Danielle Myers and Matt Glenn, after he was identified Nov. 17, 2017, using family reference samples, DPAA and the newspaper said.

“This funeral isn’t just for my uncle, it’s for all our missing [sailors],” Myers said in the DPAA statement. “Knowing that my uncle was honored, and to see these Sailors honor him is special and precious — too precious to put into words.”

DPAA scientists use a variety of techniques to identify the remains of unknown servicemembers, the statement said, including analysis of skeletal remains, DNA and dental and chest radiograph comparisons.

“Each separate line of evidence must be examined at the lab and correlated with all historical evidence,” it added.

DPAA has often been criticized for using an anthropology led system as opposed to a DNA led one. Those have been used successfully around the world in mass casualty situations. The agency’s DNA testing is performed by Department of Defense DNA Operations, a division of the Armed Forces Medical Examiner System, based at Dover Air Force Base, Del.

The news of the 100th burial came the day after the death of Ray Emory, 97, of Boise, Idaho. The Navy veteran and Pearl Harbor attack survivor fought for years to exhume and identify the Oklahoma “unknowns.”