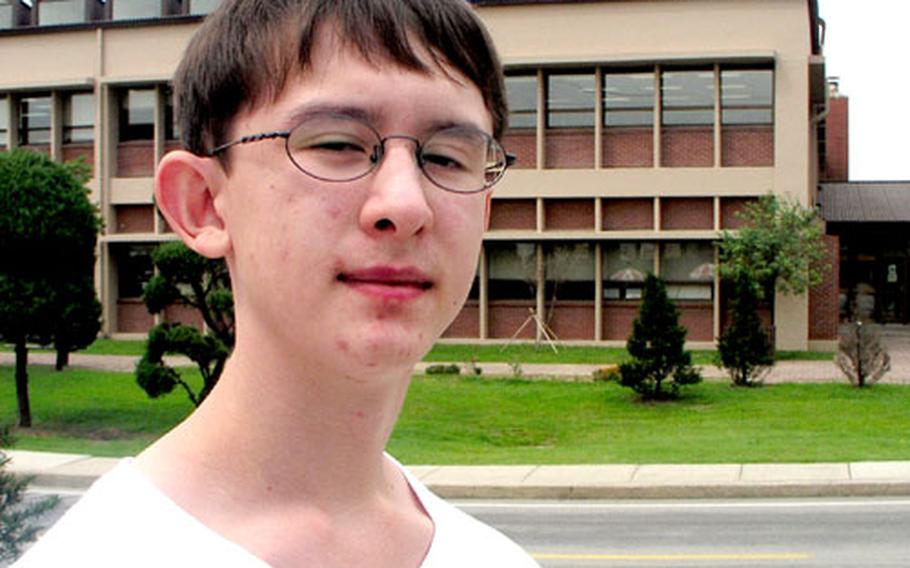 Nathan Carswell, 13, stands across the street from Osan American High School at Osan Air Base in South Korea. Nathan and his parents are anxiously awaiting Sept. 13, when school officials will tell them whether any vacancies have opened up. (Franklin Fisher / S&S)

OSAN AIR BASE, South Korea &#8212; Around 9 a.m. Aug. 30 at Osan American High School, the hundreds of students who&#8217;d shown up for the first day of school had already received their new class assignments and were pledging allegiance to the flag.

But 13-year-old Nathan Carswell was just getting out of bed.

Nathan is one of about 45 Category 2 students &#8212; family members of civilian contractors who work for the U.S. military &#8212; shut out of the high school because of a space crunch. Another 35 students face a similar situation at nearby Camp Humphreys Elementary School.

Because children from active-duty military families get priority school enrollment &#8212; the system calls them Category 1 &#8212; and because there has been a recent influx of those families to the area, the contractors&#8217; kids at both schools are on a waiting list.

Osan American said they will have news Monday on whether vacancies have opened up on the rolls, or whether the Department of Defense Dependents Schools- Korea district has found a way of getting them into another DODDS high school.

While students spent Monday in the school with new teachers, classmates, and courses, Nathan&#8217;s day was rather less structured.

He spent part of Monday morning on the sofa watching TV on a Korean station. He speaks some Korean, and his mother is a native speaker of Korean, married to a retired Air Force master sergeant, Raymond Carswell, who now works as a contractor with the Air Force.

Nathan helped his mother clean house, read a book from the base library, played computer games and went to tae kwon do practice. He capped his day with more TV before going to bed about 11 p.m.

Raymond Carswell said Friday that DODDS officials said there&#8217;s a strong chance Nathan will get in this year at either Osan or the DODDS school in Seoul.

But Carswell and his wife, Ryokum, remain anxious and alarmed. They worry over the late start he&#8217;s facing and whether the U.S. military and DODDS-Korea will avert a similar situation next school year.

DODDS officials have said that parents may have to turn to international schools or to home-schooling.