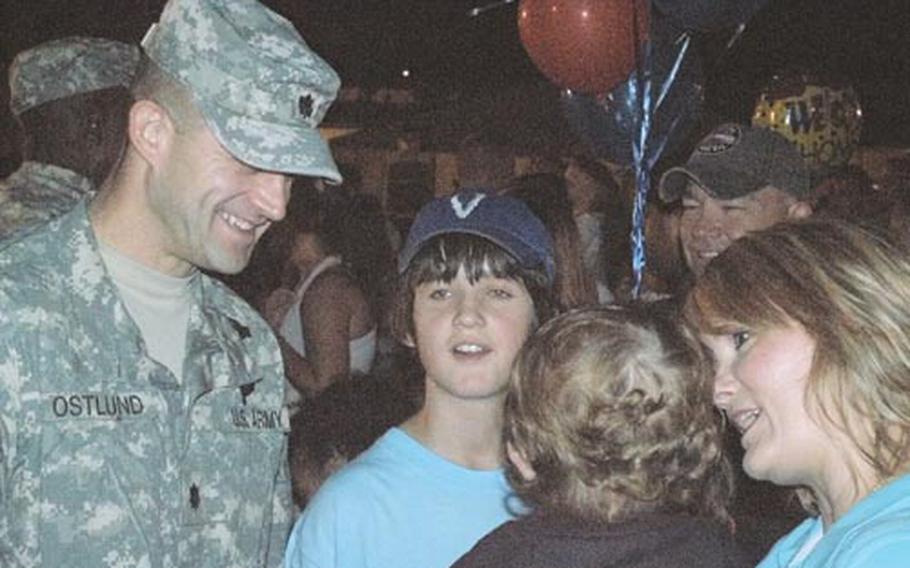 Lt. Col. Bill Ostlund, 2nd Battalion, 503rd Infantry Regiment commander, greets his family in a small island of calm as friends and family members of his soldiers rush around the field to embrace the troops returning from a 15-month deployment to Afghanistan. (Kent Harris / S&S)

Lt. Col. Bill Ostlund, 2nd Battalion, 503rd Infantry Regiment commander, greets his family in a small island of calm as friends and family members of his soldiers rush around the field to embrace the troops returning from a 15-month deployment to Afghanistan. (Kent Harris / S&S) Friends and families wait for returning soldiers Monday night under a pavilion at Hoekstra Field in Vicenza, Italy. About 60 soldiers from the 2nd Battalion, 503rd Infantry Regiment returned to their home base, leaving only about a dozen soldiers left to return from a 15-month deployment to Afghanistan. (Kent Harris / S&S)

"The other two (children) are still too scared of me," said Sgt. 1st Class Edward Hinojosa, smiling while his oldest child gave him a hug that didn&#8217;t appear to be ending any time soon.

Hinojosa and about 60 other soldiers from the 173rd Airborne Brigade Combat Team &#8212; mostly members of the 2nd Battalion, 503rd Infantry Regiment&#8217;s Headquarters and Headquarters Company &#8212; returned to Italy on Monday after a 15-month deployment to Afghanistan.

Their return means only about a dozen Sky Soldiers remain in the country, according to Col. Charles Preysler, brigade commander. Most of them are shepherding equipment and will be returning shortly.

"Everyone&#8217;s out of the field, though," said Preysler, one of a number of leaders from the brigade on hand to greet the last large group coming home. He and several others were wearing civilian garb, something that all the brigade soldiers will be doing shortly.

Most of those just returning will work half-days for a week, then start about a month&#8217;s worth of leave. Many of the brigade&#8217;s soldiers have already started block leave.

"Travel," they said almost in unison.

"I think they&#8217;ve got it all planned already," Nestell said, exchanging a smile with his wife, Angela.

Several of the other soldiers had less ambitious, more immediate plans.

"Going out to eat at a nice Italian place," said Capt. Duane Mantle, giving his girlfriend, Kelli Pearson, a tight hug. "A good meal with some vino."

"My wife is cooking tonight. A home-cooked meal," Hinojosa said, looking past a still-hugging Isaiah at his wife, Emily, and two younger children.

Preysler said the brigade will see a lot of changes after it returns from leave. Both battalion commanders in Vicenza will give up command, and Preysler will hand over the brigade&#8217;s reins in a ceremony Oct. 7. Before that, soldiers will participate in memorial services honoring the unit&#8217;s 43 soldiers who died during the rotation. Troops in Vicenza, Schweinfurt and Bamberg also will be feted in welcome home/soldier appreciation celebrations in September.

On Monday, that all seemed like a long way off, though. The soldiers touched down at Aviano Air Base after 7 p.m. and got back to Caserma Ederle after 10 p.m. Less than an hour later, Hoekstra Field was clear of festivities, giving way to dozens of smaller, more private celebrations around the community.