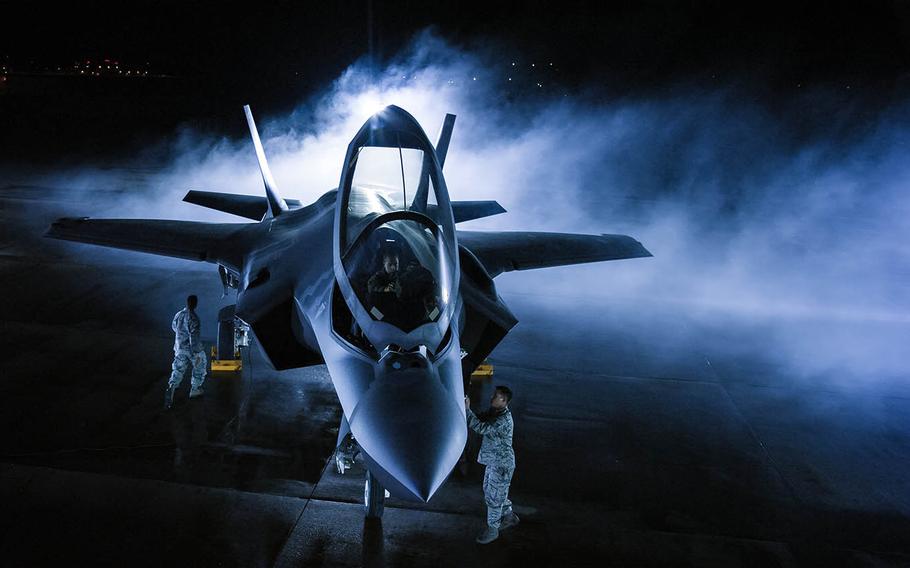 Flight-crew airmen from the 34th Aircraft Maintenance Unit at Hill Air Force Base, Utah, reenact the recovery of an F-35A Lightning II, Aug. 28, 2017. They were participating in the filming of a video about the integration of active-duty and Reserve airmen stationed at Hill. (Michael McCool/U.S. Air Force photo)

YOKOTA AIR BASE, Japan — Twelve of America’s newest stealth fighters are headed to Japan for a six-month deployment, the Air Force announced Monday.

Kadena has already hosted F-35Bs – the “short takeoff vertical landing” version of the jet – from the Iwakuni, Japan-based Marine Fighter Attack Squadron 121. The “Green Knights” arrived in Japan in January and landed at Kadena for the first time in June.

The F-35A deployment will be the first for the aircraft in the region after its successful debut at the Seoul International Aerospace and Defense Exhibition earlier this month, the statement said.

“The F-35A gives the joint warfighter unprecedented global precision attack capability against current and emerging threats while complementing our air superiority fleet,” Pacific Air Forces commander Gen. Terrence O’Shaughnessy said in the statement. “The airframe is ideally suited to meet our command’s obligations, and we look forward to integrating it into our training and operations.”

The F-35A is being deployed under U.S. Pacific Command’s “theater security package” program, which has been in operation since 2004. This deployment is designed to demonstrate the continuing U.S. commitment to stability and security in the region, the Air Force said.