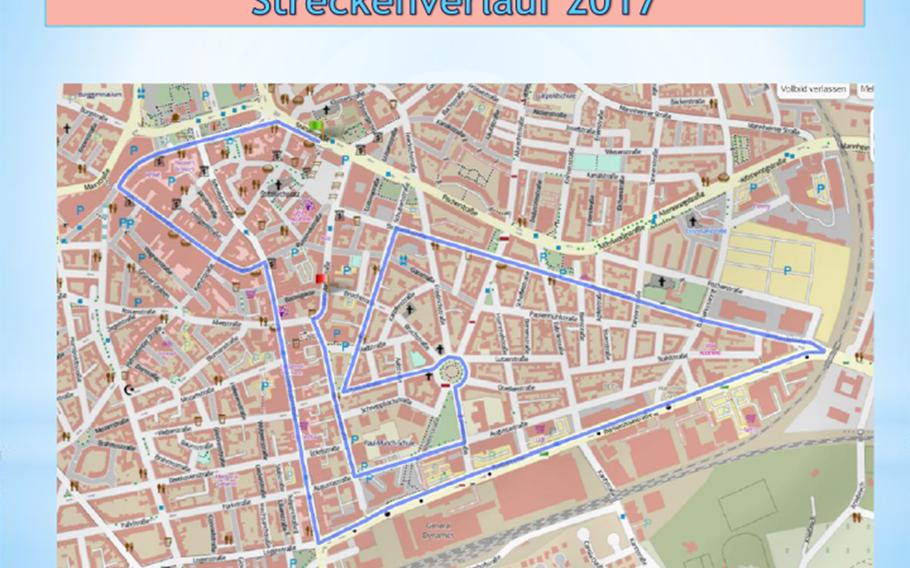 The route of the 2017 B2Run Kaiserslautern. (Courtesy of Polizeipraesidium Westpfalz)

KAISERSLAUTERN, Germany — Thousands of runners are expected to take to the streets of downtown Kaiserslautern on Thursday afternoon for the annual B2Run Kaiserslautern.

Parts of the 5-kilometer (about 3 miles) route will be closed to vehicles starting at 4 p.m. Traffic congestion and delays are expected until about 8 p.m., Kaiserslautern police said. Some parking garages downtown will be blocked and some bus lines will be affected.

The run starts at 6 p.m. on Spittelstrasse and ends on Karl-Marx-Strasse near Stiftsplatz.

City officials expect about 7,000 people from more than 350 companies in the Kaiserslautern region to participate in the 10th annual run. An after-party with live music, food and drinks is planned.

Police said streets will be reopened in phases as all the runners pass through sections of the route.

The underground garages and parking lots at Stiftsplatz, Altenhof and Lutrinastrasse will be closed for the duration of the event.