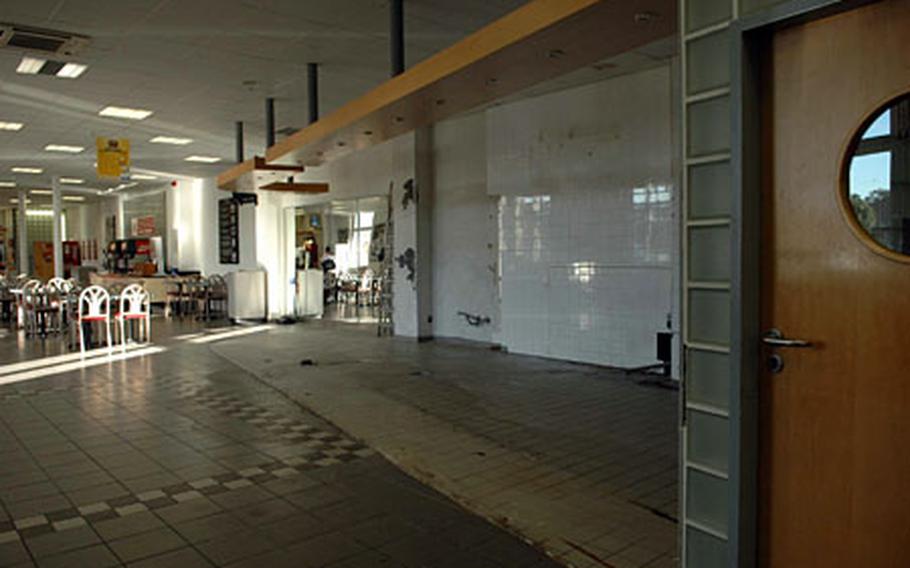 The empty space where Baskin-Robbins and Vescovi Coffee once sold ice cream and java is a constant reminder that the base is downsizing. Though Burger King and Anthony’s Pizza remain in the fast-food court, their hours have been decreased. (Charlie Reed / S&S)

The empty space where Baskin-Robbins and Vescovi Coffee once sold ice cream and java is a constant reminder that the base is downsizing. Though Burger King and Anthony’s Pizza remain in the fast-food court, their hours have been decreased. (Charlie Reed / S&S) 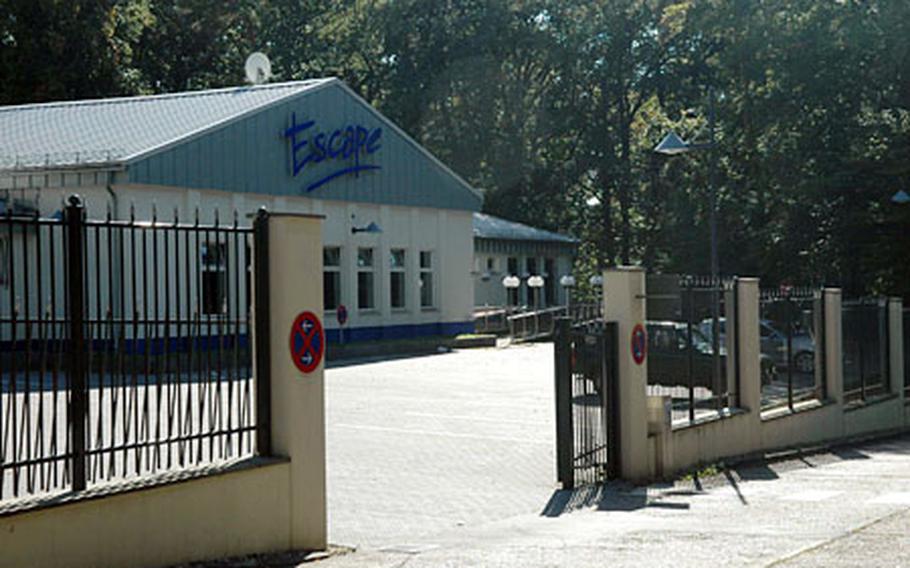 The Escape Club, just outside the gates at Cambrai Fritsch Casern, has been closed since May, though cars still park in its lot. It was among the first places to close in the community. (Charlie Reed / S&S)

A lot has changed since then, now that more than half of U.S. Army Garrison Darmstadt&#8217;s residents and employees are gone.

In August 2006, about 8,500 soldiers, family members, civilians and retirees lived and worked at USAG Darmstadt. As of last month&#8217;s count, only 3,200 remained, according to base officials.

His family, who went back to their hometown of Spokane, Wash., when he went downrange, left before the exodus started.

Darmstadt is one three garrisons in Germany being inactivated in 2008 as part of the Army&#8217;s transformation over the next few years to consolidate operations in Europe. The German government eventually will assume ownership of the bases.

Signs of the void abound. Parking lots are empty, offices are being cleaned out and buildings locked up. Many services and facilities have changed their hours because of the dwindling population, while others already have shut down.

Officials with garrison command, the Defense Commissary Agency and the Army and Air Force Exchange Service have said they are trying to keep as many things open as long as possible and will notify the community in advance of future closures expected throughout the year.

&#8220;It&#8217;s important that people know ahead of time what the impact is going to be. People count on these services and we don&#8217;t want anyone to be surprised,&#8221; said Ken White, a spokesman for Installation Management Command-Europe.

The lack of customers is driving many of the changes, but the dwindling work force also is taking a toll on base operations.

Come January, shoppers likely won&#8217;t find the same variety of products at the store as stock is adjusted based on sales, or lack thereof.

Meanwhile, three of the six military wives and five of the six high school students who worked at the commissary have quit in recent months as soldiers transfer out of Darmstadt.

It&#8217;s the same story at the fitness centers at Cambrai-Fritsch Kasern and Kelley Barracks. The loss of employees has dramatically affected service.

He just hired a personal trainer, is looking to hire a martial-arts instructor and is planning to start a spinning class soon. But, for the most part, exercises classes have been canceled, and the hours reducedat Kelley Barracks reduced.

In addition, the annual Columbus Day basketball tournament will not take place this year, &#8220;because we just don&#8217;t have the staff,&#8221; Feliciano said.

Yet, even as Darmstadt is drawing down, some new personnel are arriving.

Human resource specialist John Ford felt lucky when he found a position in ID Services last month after leaving Giessen, where most of the military community has already closed.

Still, Ford is worried about what he&#8217;ll do as Darmstadt follows suit.

Moreover, working in a community in the process of closing up is a bit depressing, he said.

But others, such as Sgt. Robert DeMusz, say the fewer people, the better.

It means less waiting at the clinic, no lines at stores and just a sense of "peace and quiet," he said. Except for a yearlong tour in Iraq, DeMusz, of the 66th Military Intelligence Group, has been in Darmstadt for seven years.