Downrange with the living dead 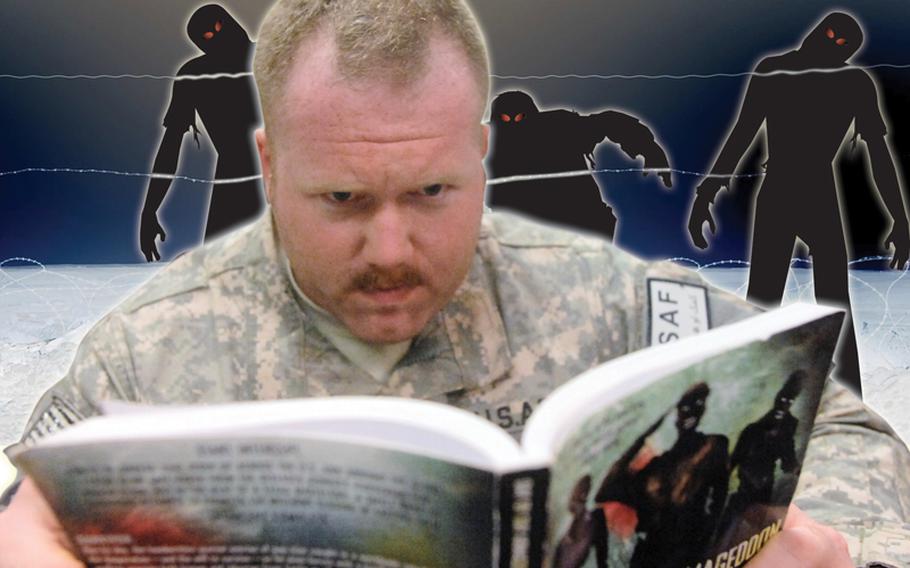 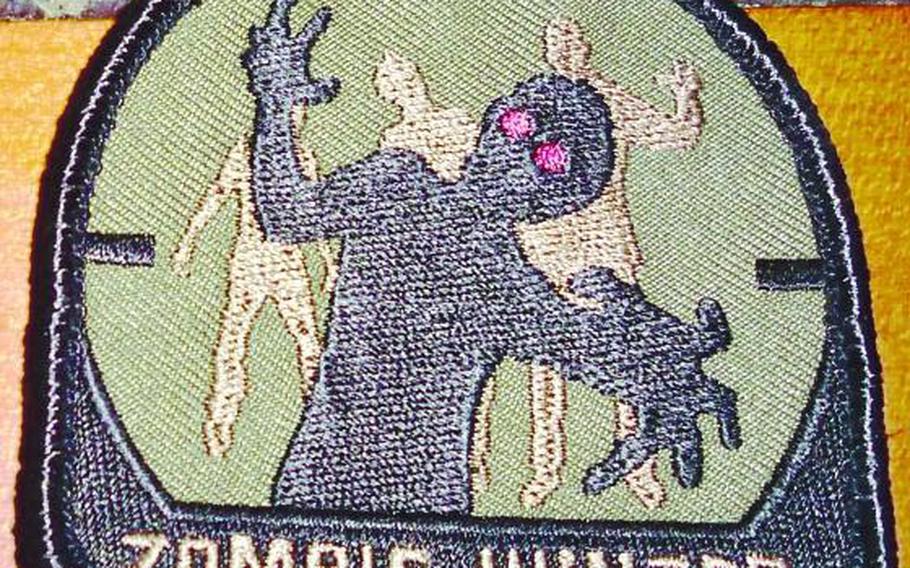 It’s not official Army gear, but a “Zombie Hunter” patch captures the spirit of a tongue-in-cheek defensive plan developed for the base at Spin Boldak, Afghanistan. ()

SPIN BOLDAK, Afghanistan &mdash; Some of the best military minds are in Afghanistan. And they&rsquo;re in danger of being eaten.

Well, maybe not, but it&rsquo;s something that officers from 4th Squadron, 2nd Stryker Cavalry Regiment think about night and day. The squadron command post at Spin Boldak, near the border with Pakistan, is full of zombie posters, books and movies. The officers prepare to defeat those who just won&rsquo;t stay dead.

It takes little to no prompting to spark soldiers here into long digressions on the zombie threat. It&rsquo;s spooky how this obsession with zombies has spread among the troops.

Almost no one is immune.

The squadron&rsquo;s acting public affairs officer, Capt. Matt Frost, 26, of Georgetown, Ill., may be &ldquo;patient zero&rdquo; &mdash; the guy who got everyone else in the unit thinking zombies.

During a long nighttime drive back in the States, Frost listened to an audio book, Max Brooks&rsquo; &ldquo;World War Z,&rdquo; which tells of the U.S. military battling to save the world from a zombie apocalypse.

&ldquo;It was unnerving,&rdquo; he said. &ldquo;The amount of detail and research (Brooks) did made a zombie apocalypse sound plausible.&rdquo;

Since he deployed to Afghanistan four months ago, the young officer has devoured the genre, including J.L. Bourne&rsquo;s &ldquo;Day By Day Armageddon.&rdquo; At the base&rsquo;s weekly outdoor showing of movies, he arranged for the soldiers to watch a series of zombie &ldquo;documentaries,&rdquo; including &ldquo;Zombieland,&rdquo; &ldquo;Dawn of the Dead&rdquo; and &ldquo;Diary of the Dead.&rdquo;

Frost has even found clips from a Pakistani zombie film online and recently persuaded the squadron chaplain to speak on camera about the zombies for a clip he plans to post on YouTube.

Zombies so eat at him that, in his free time, he&rsquo;s started looking at the threat of a zombie invasion of Afghanistan as a military problem. He&rsquo;s written reports on how to defend the U.S. base at Spin Boldak from zombies, and briefed other officers on his plans.

&ldquo;We thought we&rsquo;d been sent to work alongside a bunch of nutters, and to make things worse, we were stuck here with them,&rdquo; Senior Aircraftman (Technician) Sean Lloyd said of his initial thoughts on the zombie defense plan.

But when the Brits saw the time and effort Frost had put into his plan they found it, &ldquo;strangely reassuring that if a zombie apocalypse were to happen, that these guys would know exactly what to do,&rdquo; Lloyd said.

Now even the RAF personnel are preparing themselves for war against the undead.

&ldquo;As part of our own plan, we have been watching &lsquo;Shaun of the Dead&rsquo; and &lsquo;Zombieland&rsquo; to hone our zombie killing defense moves and been in training to allow us to outrun them if the worst was to happen,&rdquo; Lloyd said.

&ldquo;They could enjoy reading, watching movies or just a night spent shooting zombies on a video game,&rdquo; she said. This zombie defense plan &ldquo;provided a good subject for people to have a chat and a laugh about and seemed very good at raising morale and bringing people together.&rdquo;

Frost has the backing of the Squadron&rsquo;s executive officer &mdash; Maj. Ken Reed, 36, of Salinas, Calif. Reed said the zombies were &ldquo;an opportunity to blow off some steam and have a little fun with the education we have,&rdquo; before giving a short lecture on Afghanistan&rsquo;s history of zombie invasions.

&ldquo;It&rsquo;s clear that the Pashtun of southern Afghanistan have a cultural memory of frequent invasion from the south,&rdquo; he said. &ldquo;The avenues of approach are very clear from Baluchistan all the way to Kabul.&rdquo;

&ldquo;There has been RUMINT (rumor intelligence) that Osama may be developing some kind of zombie-based offensive plan,&rdquo; he added.

&ldquo;Mainly, I have seen the shambling kind out in sector,&rdquo; he said. &ldquo;Usually they are followed by dogs that sort of herd them. Most of the time I&rsquo;ve seen people go back into their compounds when there&rsquo;s a zombie.&rdquo;

Once the zombie virus reaches Kandahar Air Field, soldiers on leave and third country nationals will spread it throughout the world leading to the zombie apocalypse, he said.

To counter the threat, Frost has rewritten the base defense plan at Spin Boldak, which was focused primarily on defending against attacks by vehicles and armed humans, to deal with zombies.

The zombies won&rsquo;t behave like a conventional army, Frost predicted.

Since Frost wrote his zombie base defense plan, other officers have started applying their own military expertise to the problem.

Second Lt. Jordan Bass, 23, of Jacksonville, Ala., who works in governance reconstruction and development cell at Spin Boldak, has devised a counter-zombie operations strategy to work with Afghan security forces and local government leaders to defeat the swarms.

&ldquo;We are planning checkpoints along the highway and the border,&rdquo; he said. &ldquo;Our main goal is to prevent any sort of zombie incursion or smuggling operations or infiltration of Spin Boldak.&rdquo;