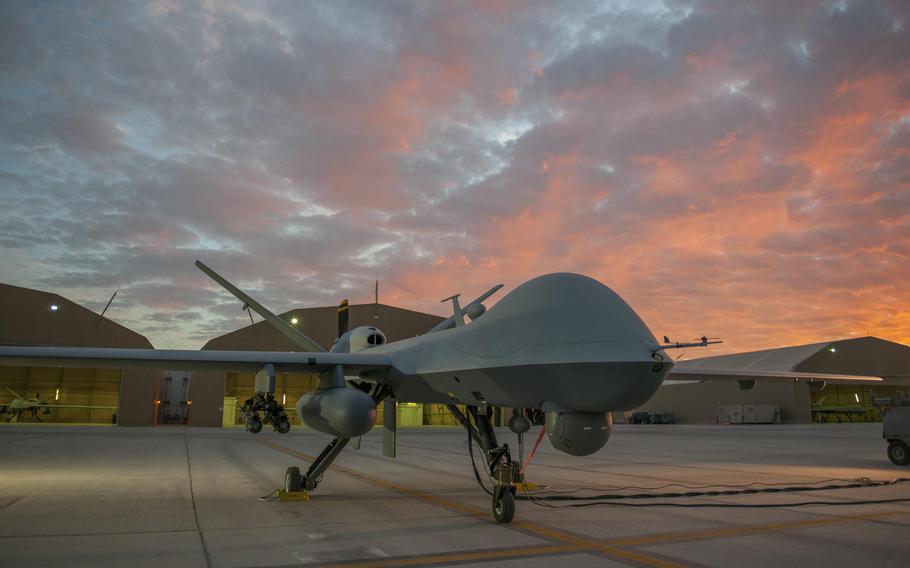 An MQ-9 Reaper sits on the flight line at Creech Air Force Base, Nev. The Reaper is an evolution of the MQ-1 Predator and can carry four AGM-114 Hellfire missiles and two 500 pound bombs while being able to fly for 18-24 hour missions. (Christian Clausen/U.S. Air Force) 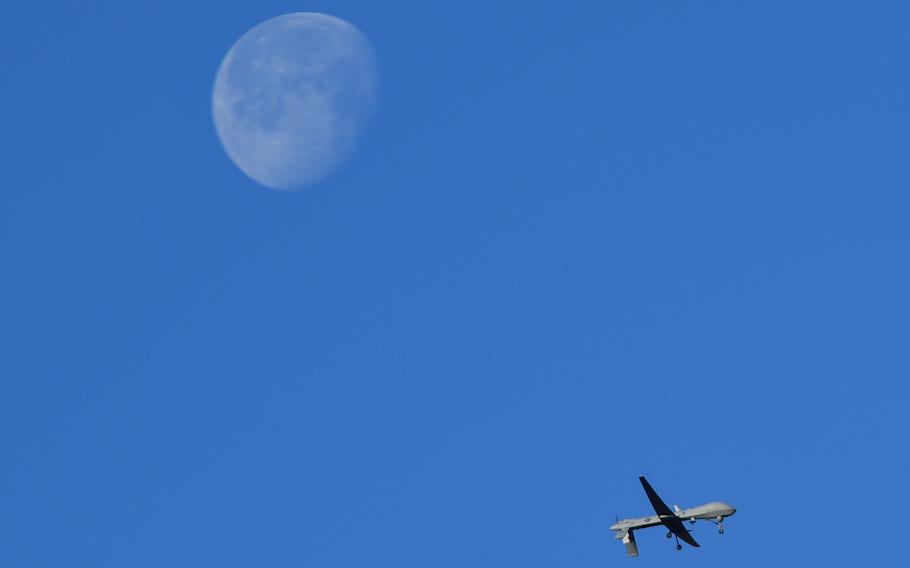 UNDISCLOSED LOCATION IN SOUTHWEST ASIA — Two seconds isn’t a lot of time. Many people believe you have a whole five seconds to pick up food you’ve dropped on the floor. It might take 15 seconds to tie a pair of shoes and a whopping six times that to brush your teeth. But in only two seconds, a signal can be sent back and forth via satellite between U.S. Air Force drones in the Middle East and its controllers in the United States via satellite.

As quick as that is, the two-second delay is enough for a remotely piloted aircraft to crash while landing or taking off. That’s because the drone could already be on the ground or at its takeoff point before the operator in the States became aware of it.

For this reason, the Air Force cannot rely alone on drone operators piloting aircraft from Creech Air Force Base, Nev. Instead the service sends airmen downrange to ensure the safe launch and recovery of the multimillion-dollar MQ-1B Predators and MQ-9 Reapers.

“Say you had a two-second delay while you’re playing a video game,” said Master Sgt. Kevin, a sensor operator for the 46th Expeditionary Attack Squadron serving at an undisclosed location in Southwest Asia. “How many people would throw their controllers because of that two-second delay.”

Kevin, who like other RPA operators interviewed for this story, could not be identified by his full name because of operational security.

The U.S. deploys drones throughout the U.S. Central Command area of responsibility to assist with strike and reconnaissance missions, including in Afghanistan, Iraq and Syria.

From the bases where the Predators are launched and recovered, these operators use antennas that provide a line-of-sight direct connection to their aircraft. This gives them instantaneous control of the drones, making launch and recovery much easier and safer.

Timing is not the only challenge the operators face. Navigating from the small metal box that houses their cockpits, they can see only what the cameras on the RPAs show them.

“Usually in a manned aircraft you have depth perception, you have peripheral cues and everything,” said Capt. John, an MQ-1B pilot with the 46th Expeditionary Attack Squadron. “But in this one it’s a camera, so you’re looking through a soda straw ... It’s pretty much like when you are in a car with a rearview camera and you reverse out of there you can’t see anyone coming back. And without all the red lines and the distance, you don’t really know how far anything really is.”

Once downrange operators successfully launch their craft, they hand it over to operators back at Creech for the missions over Iraq and Syria. The switchover occurs in just seconds, said John. When it assumes control, the team at Creech pilots the drone for the long haul, as these aircraft can fly for about 20 hours before being handed back to the downrange operators for the final approach and landing.

To avoid fatigue, no single crew remains on duty for long.

“What we’ve found through our human performance teams — the psychologist, physiologist, and just the general aircrew performance team we have here — is that attention and focus tends to start to wane a little bit at about the three-hour mark,” said Maj. Brian, a 432nd Air Expeditionary Wingweapons and tactics officer and pilot.

In a day, the aircrews fly for a total of about six hours, but they rotate every two or three hours to maintain concentration, said Brian, a former C-17 pilot.

Staying focused is crucial, as RPAs play a major role in gathering intelligence and providing air support to clear the way for ground forces liberating territory from the Islamic State group in Iraq and Syria.

“In an urban environment like Mosul, we are on alert watching for vehicle-borne explosive devices, anything like muzzle flashes that indicate troops in contact or some sort of engagement is starting,” Brian said.

“When you’re engaged in the mission, you know that it’s American or coalition troops on the ground there, and the efforts you are taking or not taking directly affect whether that guy gets to go home at the end of the day.”