Downrange, no longer suffering the code of silence 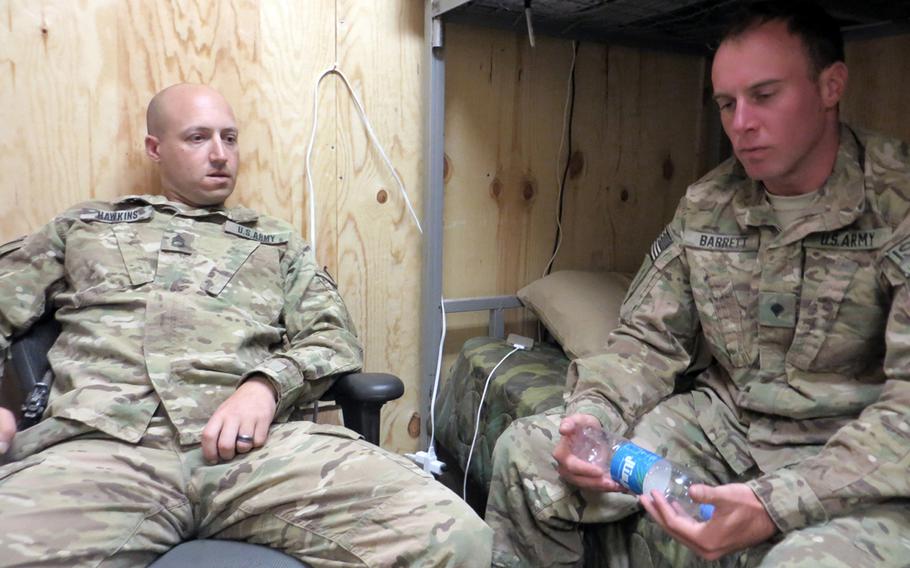 Sgt. 1st Class Corey Hawkins, left, and Spc. Travis Barrett, discuss an attack that seriously wounded another member of their platoon in Afghanistan's Logar province. ''He's made guys feel like it's OK to get things off their chest,'' Barrett said of Hawkins. (Martin Kuz/Stars and Stripes)

Sgt. 1st Class Corey Hawkins, left, and Spc. Travis Barrett, discuss an attack that seriously wounded another member of their platoon in Afghanistan's Logar province. ''He's made guys feel like it's OK to get things off their chest,'' Barrett said of Hawkins. (Martin Kuz/Stars and Stripes) 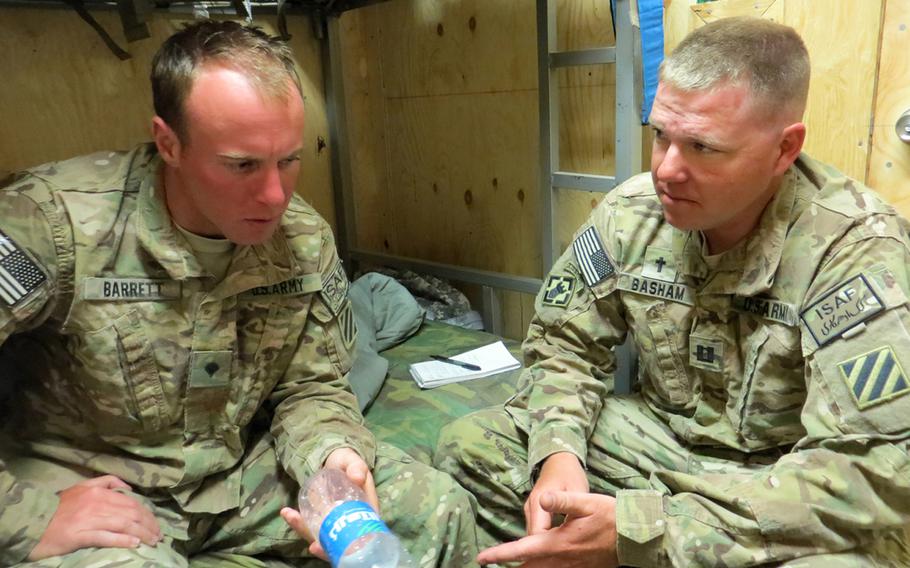 Editor's Note: In this occasional series, Stars and Stripes examines the mental health of U.S. soldiers in Afghanistan and how they cope with war’s internal burden while deployed. Stories will explore the work of psychologists, psychiatrists, social workers and chaplains to reduce the combat-related stress of troops; the efforts of senior officers to balance the needs of soldiers with the demands of the U.S. mission; and the fear of asking for help that still exists within the Army. This series is produced with the support of a Rosalynn Carter Fellowship for Mental Health Journalism.

PADKHVAB-E-SHANEH, Afghanistan — There was a time when Sgt. 1st Class Corey Hawkins showed concern toward fellow troops in a manner that more resembled a scolding. If his team, squad or platoon lost a soldier to serious injury, he offered words that pummeled rather than soothed.

The PG-rated, expletive-deleted version went something like this: “Suck it up. You can’t stop going — you have to drive on. This is the way it is.” He cared but refused to coddle, a devotee of the Army’s tough-love philosophy that molded him.

On a Friday morning a few weeks ago, three months into his sixth deployment, Hawkins confronted the same scenario in Afghanistan. He had learned that one of his men, Sgt. Luke Cifka, had stepped on an improvised explosive device in Logar province.

Hawkins, the leader of a scout platoon with the 3rd Battalion, 7th Infantry Regiment, called together his soldiers. They gathered in the narrow hallway of their plywood barracks at Forward Operating Base Shank. Most knew only that someone in the platoon of about two dozen had been wounded. He gave them the news with typical bluntness.

“Cifka got hit by an IED,” Hawkins said, pausing to chop a hand against the middle of his thigh. “He’s lost both his legs from here down.”

He went on that way for another minute or two as he detailed the attack and Cifka’s condition. Then, his tone softening, Hawkins turned more paternal, shifting his attention from the wounded soldier to those standing before him.

His open compassion suggested a changed perception of the internal ravages of war, and offered an example of a slowly rising sensitivity among senior officers to combat-related stress.

“I still have some of the ‘suck it up’ mentality when it comes to day-to-day stuff,” said Hawkins, 35, of Boulder, Col., who has returned to Afghanistan 11 years after his first tour here.

“But when you have big events like this — injuries to guys — it’s important that guys know they can talk. You don’t want them just staying in their rooms. That’s how they can wind up having problems.”

The war in Afghanistan, nearing its 12th anniversary, and the eight-year war in Iraq that ended in 2011 illuminated the mental burden of combat across a generation of troops. A Veterans Affairs study last year found that almost one-third of Afghanistan and Iraq war veterans treated at VA hospitals and clinics suffer from post-traumatic stress disorder.

The prevalence of PTSD has provoked questions within the Army about the wisdom of senior officers badgering lower-ranking troops to repress their combat trauma while deployed.

The unofficial code of silence, long regarded as a barometer of soldier strength, has drawn scrutiny of late as a doctrine that merely defers war’s psychological toll. In recent years, several top military officials, including the sergeant major of the Army, Raymond F. Chandler III, have openly discussed their struggles with PTSD,and encouraged soldiers to divulge what troubles them sooner rather than later.

For Hawkins, whose first child was born between his previous tour in Iraq in 2007 and arriving in Afghanistan this year, age and experience have prodded him to reconsider the tight-lipped ethos.

“I think being a little older has made me realize guys need to let stuff out,” said Hawkins, his lower lip bulging with a plug of dip. “Some guys just deal with stress by themselves. But for a lot of them, it helps if they can sit around and blow off steam.”

Cifka, 26, of Pullman, Wash., flew to the United States last month to continue his long recovery. Tall and lean, possessed of humble confidence, he earned respect within the platoon for his skill as a sniper and good-natured teasing for his skewed sense of humor.

He was wounded while he and another sniper walked back from a nearby observation point to FOB Shank, 45 miles south of Kabul, a restive area where the Taliban-led insurgency remains a disruptive presence.

Word of his injury stunned Spc. Travis Barrett, a fellow sniper. Days earlier, the duo and a third sniper had finished a three-week, mostly uneventful mission providing security for troops closing down combat outposts in Kunar and Nangarhar provinces. The trio solved their boredom one day by firing a few shots at the ground beside a herd of goats in the distance, cackling as the animals bounded away as if the earth were a trampoline.

Barrett joined most of the platoon in waiting at the medical clinic until Cifka departed in the afternoon on a medevac helicopter.

“This was the first time I’ve been around a casualty in my own unit,” said Barrett, 27, of Lakeland, Fla., who previously deployed to Afghanistan in 2011. “Seeing him put on the bird — that was hard. That’s when you realize it’s real.”

In the evening, Hawkins convened a platoon meeting inside a tent used for patrol briefings and told the men to discuss any topic that came to mind. The mood was subdued yet less than funereal, the conversation roaming from Cifka to upcoming missions to baseball. Camaraderie leavened the grief.

“It didn’t matter what was being talked about, just that guys were talking,” said Barrett, who will marry his fiancée in December. “They felt like they could do that after what Sgt. Hawkins said earlier in the day. Everyone knew he understood.”

Capt. Mickey Basham, the battalion’s chaplain, attended the gathering. As it turned out, he spent much of the time listening, reduced to irrelevance in the best sense.

“They didn’t really need me to say anything,” said Basham, 36, of Jackson, Tenn. “They had taken the signal from (Hawkins) and were there supporting each other.”

Hawkins sought to rally the platoon without ignoring its mission. He re-established the unit’s routine by resuming patrols within 24 hours. He also reminded his soldiers that the impulse for revenge — an urge he admitted to sharing — had to be tamed.

“All you want to do after one of your guys is wounded is go out and eliminate enemy personnel at will,” Hawkins said. “But there are rules to war, and you have to stay within yourself. If you don’t, more guys will probably get hurt.”

He has applied similar discipline in gauging the disposition of his men since Cifka left. If he notices one acting withdrawn, he pulls him aside to ask, “Hey, what’s up? Are you good? What are you thinking about?” Sometimes he advises a soldier to visit Basham, less for spiritual guidance than “to air out his head.”

The hands-on approach has reassured the platoon. “He’s made guys feel like it’s OK to get things off their chest,” Barrett said. “That helps them refocus and get back in the game.”

Hawkins chokes up on occasion when he mentions Cifka, and he often invokes the wounded soldier’s name as a source of inspiration. During a recent phone call with the battalion’s sergeant major, Cifka signed off by quoting the unit’s motto, “Cottonbalers, By God.”

Hawkins relayed the story to his men, aware of the healing effect of defying silence.

“I thought, ‘Cool — he’s definitely got the fight in him. He knows he’s still part of us,’” Hawkins said. “I want my guys to hear that.”