Dover: Famous white cliffs and the enchanted castle are calling Medieval underground tunnels are one of the many sights at Dover Castle. The tunnels lead to cannon batteries that were used to defend the castle for hundreds of years. (Mark Abramson/S&S)

Medieval underground tunnels are one of the many sights at Dover Castle. The tunnels lead to cannon batteries that were used to defend the castle for hundreds of years. (Mark Abramson/S&S) 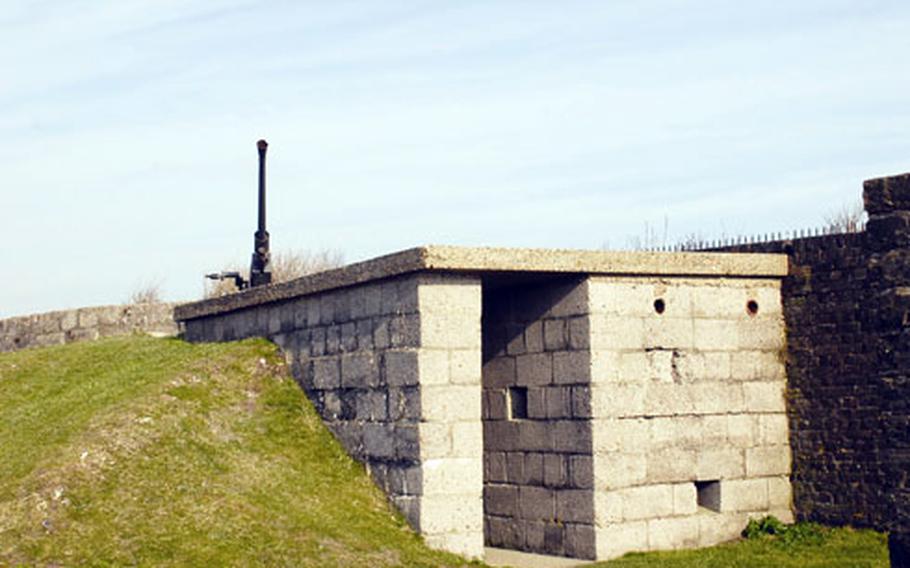 A 40 mm anti-aircraft gun points skyward across the English Channel at Dover Castle. During World War II, the skies around the castle were the scene of dogfights. (Mark Abramson/S&S) The inner bailey of Dover Castle included Henry II’s keep, which was the center of the fortress. The land the castle sits on features Roman lighthouses, a church, barracks and anti-aircraft gun batteries that were used during World War II. (Mark Abramson/S&S)

An enchanting castle with scenic vistas of the English Channel and Dover lies about three hours from RAF Lakenheath and RAF Mildenhall.

The Dover Castle and the famous white cliffs, one of the day trips offered by Information Tickets & Travel, is well worth the drive and entrance fees.

Its history goes back thousands of years with Roman lighthouse ruins dotting the grounds, 19th-century officer barracks, medieval tunnels that led to cannon batteries and anti-aircraft gun emplacements that were instrumental in defending the United Kingdom during World War II. Below the castle are tunnels that once housed the command center for shoreline gun batteries intended to help stave off a Nazi invasion.

"We got about 2,000 years of history," said Steve Lang, head of visitor operations for English Heritage Dover Castle. "People appreciate the different elements.

"It&rsquo;s huge. It is layers of castle. It is not just the actual keep itself."

About 300,000 people visit the castle a year, making it the second most popular English Heritage site behind Stonehenge, Lang said.

Visitors can learn about the fortress&rsquo; pivotal role in defending England for hundreds of years, helping it to earn the nickname "Key to England." The castle was used to defend England into the late 1950s.

"When it was originally built, King Henry II was the head of the Angevin Empire that stretched to the South of France," Lang said. "Dover was halfway through his kingdom, so that is why it was seen as the key to England."

According to English Heritage, no fortress in England has a longer history than Dover Castle, which sits at the shortest sea crossing between England and the European mainland. France is visible from the castle on a clear day, English Heritage officials said.

Visitors are free to explore the grounds with a pamphlet that includes a map labeled with more than 25 points of interest. People can learn about the weapons used to defend the castle, the kings who visited and the Siege of 1216, in which the French army inflicted severe damage on the castle.

English Heritage also offers tours of the sprawling 80-acre site, including guided tours and evening ghost tours. The ghost tours, which are offered only from November through February, came about because of the stories through the ages about ghostly pilots and soldiers being sighted, Lang said.

An underground room, called the repeater station, is believed to be the most haunted place in the castle, Lang said.