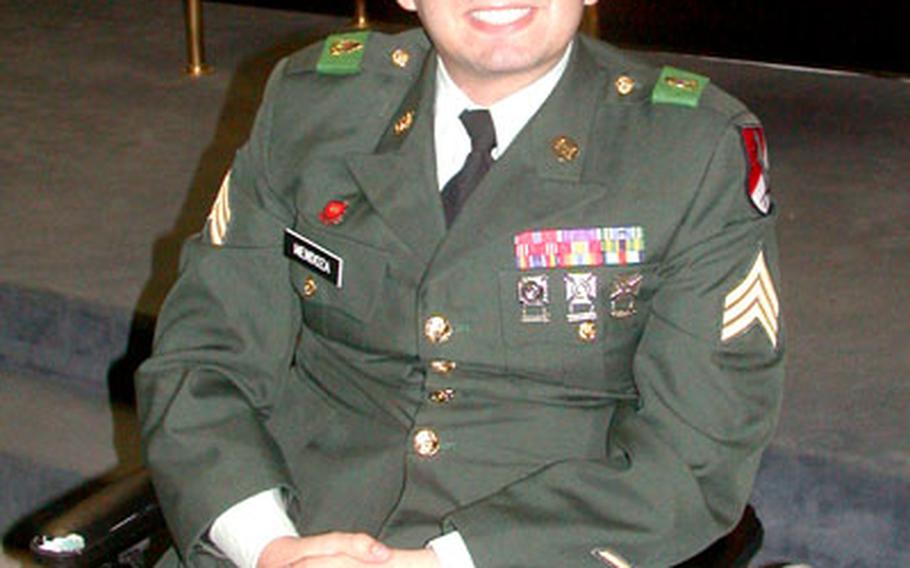 Army Sgt. Manuel Mendoza, 24, lost both of his legs in Iraq and is now receiving housing, a job, a van and educational benefits from California-based Sentinels of Freedom. (Jeff Schogol / S&S)

Army Sgt. Manuel Mendoza, 24, lost both of his legs in Iraq and is now receiving housing, a job, a van and educational benefits from California-based Sentinels of Freedom. (Jeff Schogol / S&S) 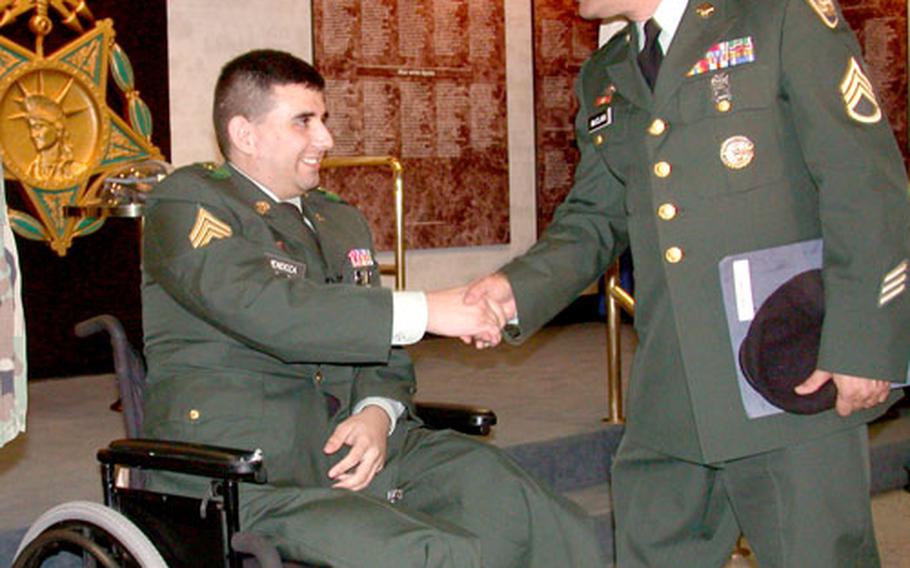 Mendoza was serving his fifth year in the Army as an engineer with the 11th Armored Cavalry Regiment&#8217;s 58th Combat Engineering Co. when he made that trip. Thirty days later, he woke up at Walter Reed Army Medical Center in Washington to learn that an insurgent&#8217;s roadside bomb had taken both his legs.

The next phase of his life was to begin Saturday, when he propels his wheelchair into a brand-new, custom-designed apartment in San Ramon, Calif.

Waiting for Mendoza is a new career as a program manager for SBC Communications, a network service organization. To get him to the job, there is a brand new van, complete with ramp and hand controls.

And to ensure that he succeeds, the most prominent members of his new community, from the mayor on down, will be on hand for no less than four years, actively mentoring the 24-year-old.

Despite a rough recovery &#8212; bed-ridden for three months, recovering from more than 20 surgeries &#8212; &#8220;from Day 1, [Mendoza] had a smile on his face and a positive spirit,&#8221; Army Maj. Gen. Kenneth Farmer, commander of Walter Reed and the North Atlantic Medical Command, said after a Pentagon ceremony naming the young soldier as the first recipient of San Ramon&#8217;s inaugural &#8220;Sentinels of Freedom&#8221; scholarship.

The scholarship was awarded by a group of business and community leaders from San Ramon, Calif., who were looking for an Iraq or Afghanistan amputee &#8220;with the drive to succeed,&#8221; according to retired Army Maj. Gen. Ron Lowe, part of the committee that created the award.

There are many programs to help injured veterans, but the San Ramon scholarship is the most comprehensive to date, Gordon England, acting deputy secretary of Defense, said during the award ceremony.

But the San Ramon &#8220;model is already being adapted by other communities,&#8221; England said, including Danville, Calif., which is well on its way to creating a similar award.

Mendoza said he is looking forward to his new life.

Meanwhile, Mendoza said he has a message to his fellow servicemembers in Iraq and Afghanistan.