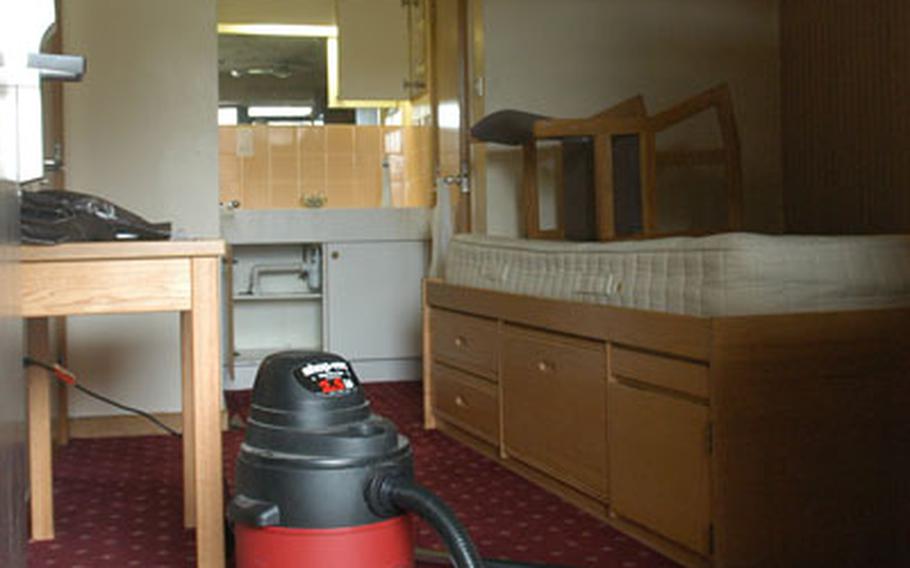 Senior Airman James Gray&#39;s dorm room was one of about 11 that was flooded. There was no water pressure and nothing coming out of the taps Wednesday morning, and Gray and a handful of other airmen left their taps on. The pressure came back later in the day and overflowed sinks, flooding rooms and the rooms below in some cases. (Geoff Ziezulewicz / S&S)

But in dormitories across the base, there was no water coming out of the faucets.

So, along with a handful of other dorm-based airmen, Gray left for work with the faucet still turned on.

Right before lunch that day, he got a call telling him his room was flooded. The water pressure had come back, and his tap released water all over his room and onto the room below.

Some rooms were affected by overflowing faucets while other rooms had water drip from above, he said, adding that airmen whose rooms were damaged were moved to other rooms. Damage mainly involved wet possessions and a saturated carpet.

Palmer said the flooding was first noticed in 917 when water was seen running out from beneath a door.

The flooding also affected some electrical and fire systems, Murphy said. Temporary smoke detectors have been installed until the damaged ones can be replaced.

In one instance, an electrical short ignited one of the fire alarms but was promptly extinguished as water dripped down, Palmer said.

Cleanup involves mainly carpeting, a couple of smoke detectors and some electrical issues, Murphy said, adding that there is no cost estimate for the repairs.

Murphy said the water pressure issue arose Tuesday as contractors worked to replace about 26 miles of water pipes throughout Lakenheath. Air got into one part of the suction pumps and affected the pressure.

The problem has been alleviated, and the water towers on base now will be used as a backup to keep pressure steady should anything happen again with the new water lines, Murphy said.

On Thursday afternoon, Gray was drying out his room, using a wet-and-dry vacuum to suck up the water still saturating his carpet.

Except for some clothes that weren&#8217;t put away at the time, Gray said none of his possessions was damaged, and that he hadn&#8217;t talked to the airman whose apartment below him was dripped on.