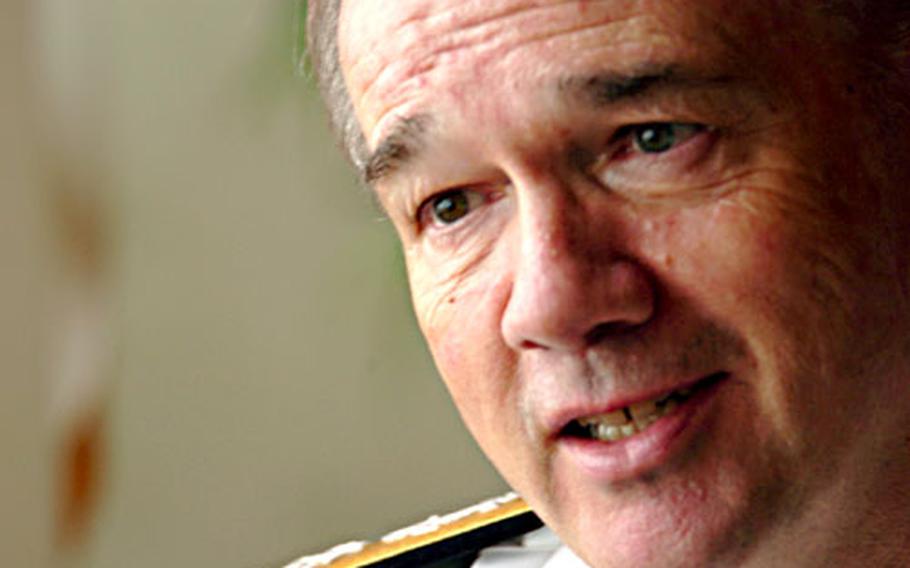 YOKOSUKA NAVAL BASE, Japan &#8212; After three years leading the world&#8217;s largest combined fleet, Adm. Walter F. Doran returned one last time to Japan to bid farewell to some of the U.S. Navy&#8217;s key allies and many personal friends.

He is scheduled to turn over command of the Pacific Fleet, comprising the 3rd and 7th fleets, and retire July 8. Doran commanded Amphibious Force 7th Fleet and Amphibious Group 1 from Okinawa in the 1990s and returned a few years later to command the 7th Fleet from Yokosuka.

His trip this month to Japan, with stops in Sapporo, Yokosuka and Sasebo, included visits to local leaders, dignitaries and old friends. But friendships aside, Doran said, it is critical for U.S. military leaders to thank Japan for its hospitality.

By maintaining a presence here, the Navy is able to create regional stability, thwart the rise of rogue nations and terror groups and react to disasters such as the December tsunamis in Asia, he said.

&#8220;The relationship between the United States and Japan, particularly between the Japanese Maritime Self-Defense Force and the United States Navy, is key critical to our ability to have a persistent presence in the Western Pacific,&#8221; Doran said Saturday during a stop in Yokosuka. &#8220;There is a lot going on out here right now. There is the North Korean question; China is emerging as a mature nation in the world; there are events such as the tsunami. Our ability to be present in the Western Pacific is very, very important. &#8230; We wouldn&#8217;t be here without the relationship with Japan.&#8221;

The Navy&#8217;s immediate reaction to the South Asia tsunamis demonstrated both the importance of being forward-deployed to Japan and the strength of the United States&#8217; relationship with Japan and other nations that took part in the reconstruction effort, he said.

&#8220;The tsunami occurred and six days later we are flying planes into Indonesia. That doesn&#8217;t just happen,&#8221; Doran said. &#8220;One of the ways that happens is because of the habitual relationships that happen over the years between leaders.&#8221;

The operation&#8217;s outcome was equally significant, he said, adding the Navy helped bolster its image in the region by acting quickly and effectively &#8212; and then leaving.

&#8220;We showed the world &#8230; not only the capability but our intention,&#8221; Doran said, adding that he believes the Pacific Rim will become even more significant to the United States throughout the century.

As such, he said, the Navy is improving its posture here &#8212; not in size, but in capability.

&#8220;All the cruisers and destroyers that are forward-deployed to Yokosuka right now are all Aegis technology ships. &#8230; We are sending our best out here,&#8221; he said.

Sailors stationed here will benefit from that, he added. &#8220;The Bureau of Naval Personnel is very aware of the necessity of getting the very best people out here &#8230; in the future, service in the forward-deployed naval forces will be a key element in the career progression of our best sailors.&#8221;

Doran also spoke about the need for discipline in the region, where sailors&#8217; behavior is more closely observed than perhaps in the United States.

In May 2004, a memo to his commands stated his concern about the number of assaults and alcohol-related incidents committed by sailors. Doran said the memo asked commanders to remind their sailors why behavior is important, particularly overseas.

&#8220;Every once in a while you have to reconfirm to the new people coming out here that they are living in a new culture. They are guests in another nation. They need to be very aware that they stand out. They are Americans and they have a responsibility to behave properly. And they do understand that,&#8221; he said.

Doran also acknowledged recent rules requiring sailors to rotate to the States more often are a sensitive issue but called the new regulations critical to keeping skills developed here infused across the Navy.

Doran said he doesn&#8217;t know yet where retirement will lead him but plans to retain some connection to the Western Pacific.