Sgt. Travis Stoddard, seen when he received his Purple Heart, said he liked what he read of “The Long Road Home” during his recovery at Landstuhl. “That book is all right,” said the 25-year-old from Greenville, S.C. (Steve Mraz / S&S)

Sgt. Travis Stoddard, seen when he received his Purple Heart, said he liked what he read of “The Long Road Home” during his recovery at Landstuhl. “That book is all right,” said the 25-year-old from Greenville, S.C. (Steve Mraz / S&S) 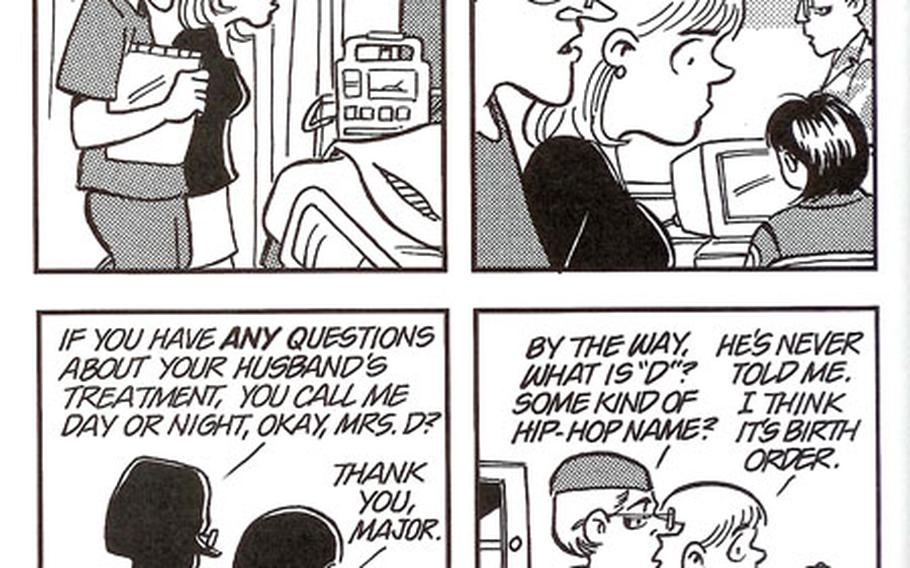 A sample page from from Garry Trudeau’s latest compilation book of his “Doonesbury” comic strips follows the injury and recovery of B.D., a popular cartoon character in his series who was wounded in Iraq. (Courtesy of G.B. Trudeau)

Love him or hate him, Garry Trudeau, the man responsible for the &#8220;Doonesbury&#8221; comic strip, is doing his part to help wounded troops and their families.

Trudeau is donating all his proceeds from the sale of his newly released book &#8220;The Long Road Home: One Step at a Time&#8221; to the Fisher House Foundation. Also, Andrews McMeel Publishing, the book&#8217;s publisher, is contributing 10 percent of its take from the book to Fisher House.

Considering that the $9.95 book has been out less than a month and already has sold thousands of copies, the financial benefit for the Fisher House could be substantial.

Fisher House offers family members of wounded troops temporary housing at little or no cost during their loved one&#8217;s hospitalization. With locations at 32 veterans and military hospitals throughout the United States and in Landstuhl, Germany, Fisher House is largely funded through private donations.

&#8220;The Long Road Home&#8221; tells the story of B.D., a popular &#8220;Doonesbury&#8221; character who, while serving in Fallujah, Iraq, is wounded and has his left leg amputated. The comic strip follows B.D. along his journey of injury and recovery &#8212; from Iraq to Landstuhl Regional Medical Center in Germany to the amputee ward at Walter Reed Medical Center in Washington, D.C.

&#8220;He [Trudeau] has a genuine caring and concern for these kids,&#8221; said Jim Weiskopf, vice president of communications for Fisher House Foundation. &#8220;In his own journalistic manner, he wanted to tell the American public what these amputees have gone through, and he&#8217;s really done it well.&#8221;

Not bad praise for Trudeau, an opponent of the war in Iraq, considering it&#8217;s coming from Weiskopf, a retired Army colonel.

In addition, Sen. John McCain, R-Ariz., a former naval aviator who spent more than five years as a prisoner of war in Vietnam, wrote the foreword to Trudeau&#8217;s 93-page book.

That the book brought Trudeau, McCain and the Fisher House together warms the heart of Erin Friedrich, senior editor at Andrews McMeel Publishing in Kansas City, Mo.

However, Trudeau is not without his opponents.

Trudeau and his &#8220;Doonesbury&#8221; comic strip have taken plenty of heat from readers of this newspaper. Readers of Stars and Stripes have criticized the comic strip for its liberal leanings and the political jabs the cartoon takes at the current presidential administration and government leaders.

At the same time, a number of readers wrote to the paper upholding Trudeau&#8217;s right to free expression.

Now that the book is available, about 2,000 copies of &#8220;The Long Road Home&#8221; are being given to caregivers and wounded troops at Landstuhl Regional Medical Center.

Sgt. Travis Stoddard, who was shot in the left leg June 21 while serving in Afghanistan, read a portion of &#8220;The Long Road Home&#8221; during his recovery at Landstuhl.

From his bed at the hospital, Stoddard said he liked the book.