Stanley Taylor, left, the president of Sunny-Net Internet service provider, and Ernie Ernst, vice commander of the American Legion Post 28 on Okinawa, visit the Okinawa AmerAsian School in Ginowan, Okinawa on Wednesday with a donation they made to equip the school with modern computer technology. (Chiyomi Sumida / S&S)

Stanley Taylor, left, the president of Sunny-Net Internet service provider, and Ernie Ernst, vice commander of the American Legion Post 28 on Okinawa, visit the Okinawa AmerAsian School in Ginowan, Okinawa on Wednesday with a donation they made to equip the school with modern computer technology. (Chiyomi Sumida / S&S) 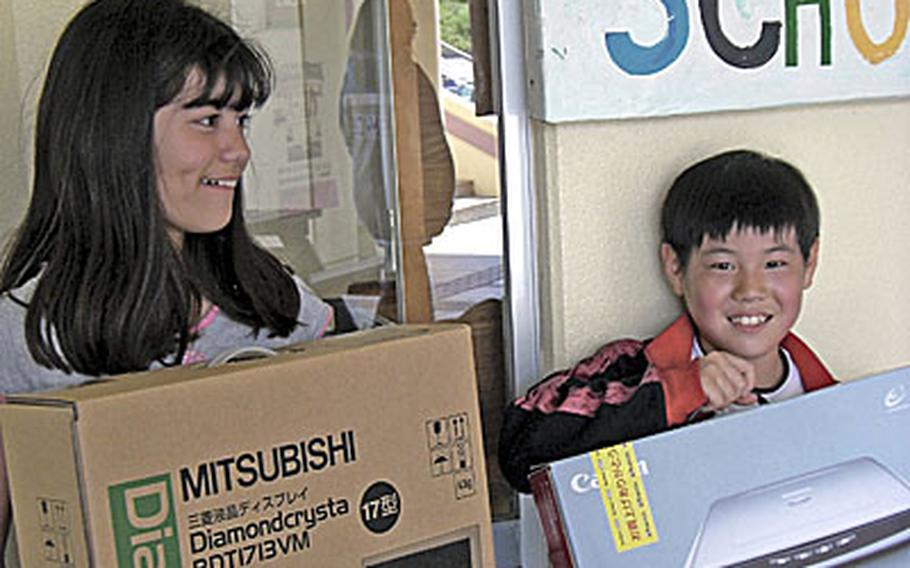 GINOWAN, Okinawa &#8212; A couple of close friends of the Okinawa AmerAsian School pitched in Wednesday to boost the school into the 21st century.

American Legion Post 28 and Sunny-Net, an Internet service provider, donated a new computer system to the school, which offers bilingual and bicultural education to biracial children. Many of the students are Japanese&#8211;Americans who can&#8217;t attend Department of Defense Dependents Schools and feel out of place in the Japanese school system. The current enrollment at the school is 70 students, ages 5 to 15.

The new computer system &#8220;is revolutionary for our school,&#8221; said principal Michael Fad.

&#8220;Teachers no longer need to run back and forth between a classroom and the office with a floppy disc,&#8221; Fad said. &#8220;Now, each and every classroom has Internet access and newly installed overhead projectors, enabling teachers to instantly share downloaded information with their students.&#8221;

Because many of the students are raised by single mothers, the school, run by a nonprofit organization, charges minimal tuition, Fad said.

Okinawa&#8217;s U.S. military community has been a strong supporter of the school since it opened in 1998, school officials said.

The school started in an old two-story house in a crowded residential area in Ginowan. The poor conditions prompted the American Legion become the school&#8217;s &#8220;guardian,&#8221; said Ernie Ernst, vice commander of Post 28.

&#8220;It made us sad,&#8221; he said as he delivered the equipment Wednesday. The Legion continued to support the school after it moved to a new facility owned by the city of Ginowan and built with funds from the national government.

Ernst, a retired Marine Corps master gunnery sergeant, said he is happy to see the school now is well equipped with modern technology.

Stanley Taylor, president of Sunny-Net and also a retired master gunnery sergeant, sends his two children to the school.

However, he was not satisfied with the school&#8217;s old computer system and pledged to remedy the situation.

&#8220;While they have good quality teachers, the computer system was inadequate,&#8221; he said. &#8220;It is very important for kids to be exposed with information technology at an early age.&#8221;