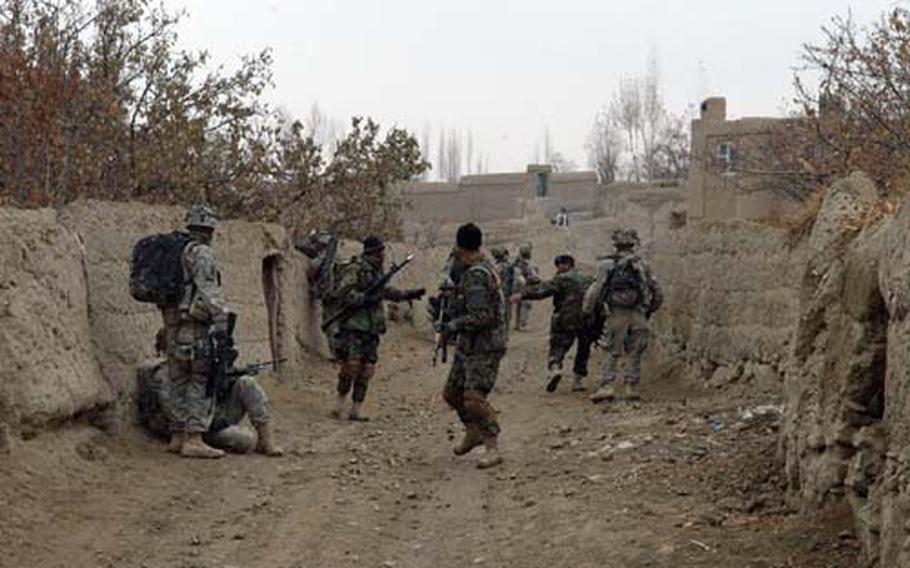 Seconds after a bomb detonated near Spc. Burch Swigert during a patrol in Logar province, Afghan soldiers fled after an undetonated part of the bomb was found in the soil next to the blast site. (Geoff Ziezulewicz / S&S)

Seconds after a bomb detonated near Spc. Burch Swigert during a patrol in Logar province, Afghan soldiers fled after an undetonated part of the bomb was found in the soil next to the blast site. (Geoff Ziezulewicz / S&S) 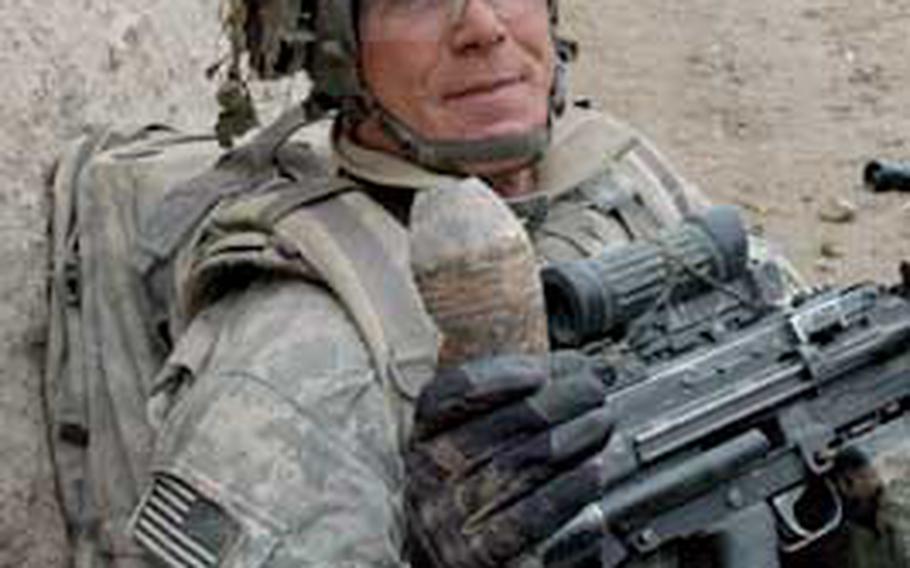 Spc. Burch Swigert of 1st Platoon, Company B, 1st Battalion, 32nd Infantry Regiment holds a shard of the bomb that detonated next to him while on patrol Nov. 24 in the Charkh district of Logar province. (Geoff Ziezulewicz / S&S)

LOGAR PROVINCE, Afghanistan &#8212; Maybe the Afghan kids shouting in the distance were telling the soldiers to get out of their neighborhood.

Perhaps they were trying to warn the troops not to make that right turn.

Or maybe they were signaling the triggerman around the corner to blow up some Americans on Nov. 24, a cold and damp Tuesday afternoon.

But just as the men of 1st Platoon turned onto yet another muddy path, a bomb buried near an orchard gate detonated next to Spc. Burch Swigert.

The blast shook the platoon ahead of Swigert&#8217;s position. An Afghan soldier swung his rocket-propelled grenade launcher around to fire before the Americans shouted him down.

The platoon ran back toward the boom, only to freeze as screaming Afghan soldiers pointed out a second, unexploded shell where the bomb went off. To add to the tension, the unit was in a dead zone. Their radios could not reach help at Combat Outpost Charkh and the rest of Company B, 1st Battalion, 32nd Infantry Regiment.

Amid the shouting, there he sat. Swigert was having a cigarette against that same orchard wall, shaken, but with everything intact.

"I love you, Swigert!" a soldier yelled as the lucky specialist got to his feet and moved down the path away from the blast site.

The bomb was made of 82 mm and 60 mm mortar shells. The larger shell blew up right next to Swigert as he walked by. But the 60 mm did not.

Despite its fearsome noise, the blast didn&#8217;t even knock the Helena, Mont., native off his feet.

The wiring of the bomb wasn&#8217;t very good, and the shell that did detonate was full of gunpowder and not its original explosives. Soldiers theorized that maybe the triggerman wanted to save those valuable explosives, or maybe he wanted to get paid to blow the bomb without hurting anyone.

Maybe it was all luck.

The triggerman had been able to see the blast point via a hole in the orchard&#8217;s opposite wall. He had no doubt watched many pairs of legs pass by before Swigert came along.

Despite the head-scratching joy that accompanied Swigert&#8217;s escape, the half-baked contraption might signal an ominous development: Until this point, the frequent enemy engagements involved rifles and rocket-propelled grenades. No roadside bombs.

Right before the blast, Swigert said he was thinking about how he has only a month left, and of a squad leader who had been injured and evacuated, and how he couldn&#8217;t see over this orchard wall.

Now, Swigert just wants to get home and make some babies.