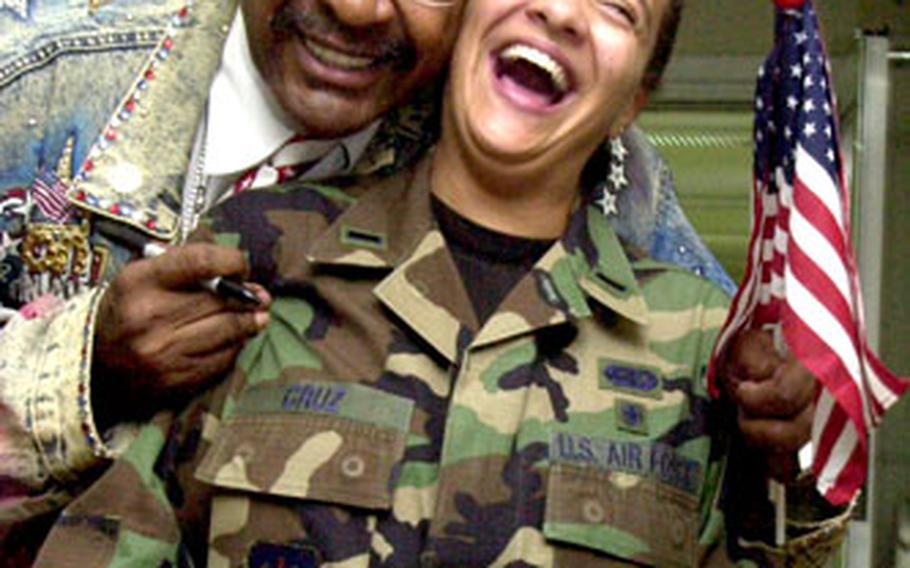 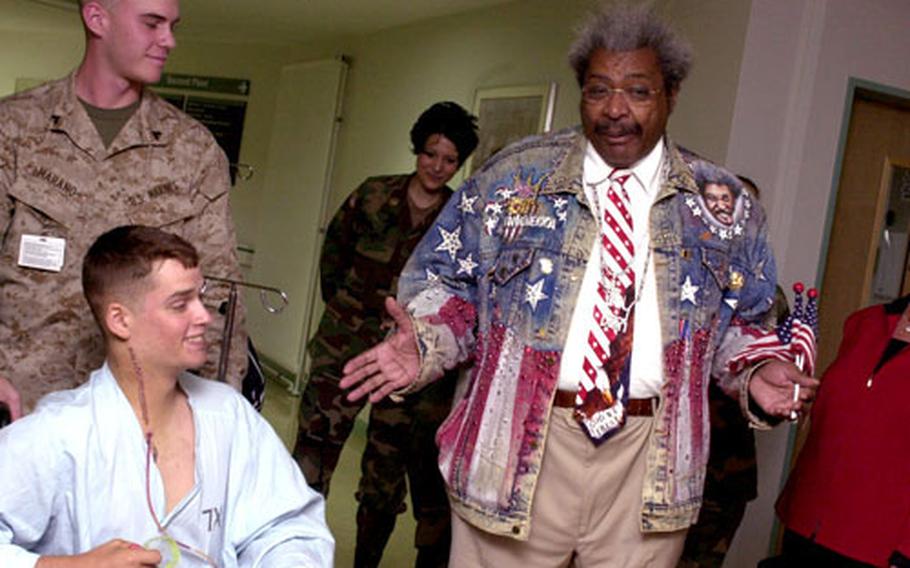 LANDSTUHL, Germany &#8212; Illustrious boxing promoter Don King and a cadre of his champion fighters want to stage a boxing exhibition in Iraq to entertain the troops.

King mentioned the idea during a visit this week to Landstuhl Regional Medical Center to sign autographs and shake hands with hospital staff members and wounded servicemembers from Iraq and Afghanistan.

As he walked the halls carrying two American flags and wearing a denim jacket emblazoned with his picture and his popular catch phrase &#8220;Only in America,&#8221; he talked about how he wanted to go to Iraq.

His son, Carl King, who also is a boxing promoter and who came with his father to Landstuhl, said many of the details, including the date and who would make the trip, are being discussed.

His father visited airmen at Ramstein Air Base before heading to the hospital to cheer up patients. The boxing icon is in Germany to promote a fight between World Boxing Organization Heavyweight Champion Lamon Brewster against Luan Krasniqi in Hamburg. Sam Simon, co-creator of &#8220;The Simpsons&#8221; and now Brewster&#8217;s manager, accompanied King and drew Bart Simpson sketches for many of the patients.

Brewster had also planned to come along, but could not make it and hopes to visit servicemembers in the area after the fight.

Moments after King walked through the hospital&#8217;s main entrance, his booming laugh and shouts of &#8220;Only in America!&#8221; brought out doctors, nurses and patients who wanted to see a glimpse of the promoter.

Army Sgt. Cacey Williams, nursing her injuries from Iraq, couldn&#8217;t believe her eyes when the boisterous King walked into her room.

He visited more than a dozen patients before posing for pictures in the hospital dining facility. Never short for words, including those he makes up on the spot, King delivered several one-liners as he walked from ward to ward.

After stopping to talk to a Marine injured in Iraq, King remarked, &#8220;Both of us have survived bombs. I did one; you did one. Where was you at? Fallujah? Yeah, I was in Cleveland.&#8221;