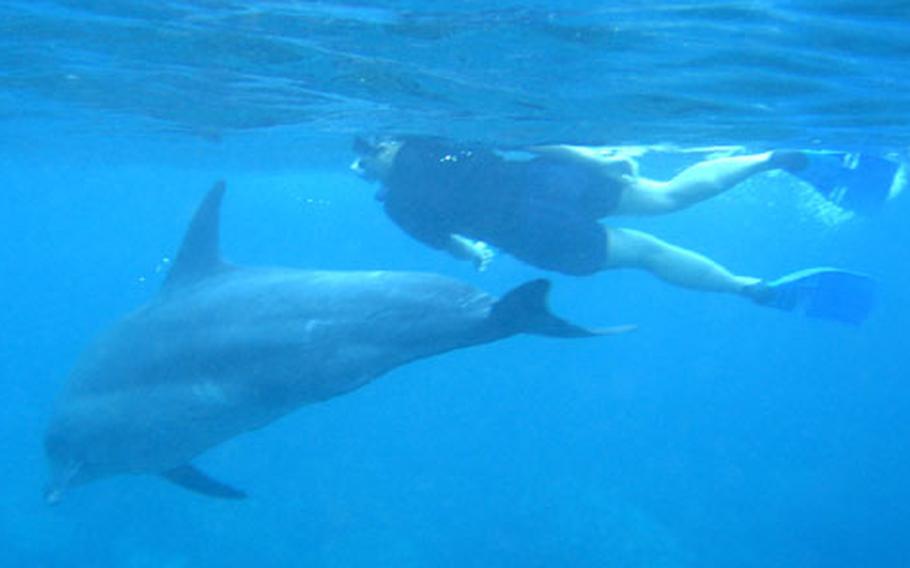 A Camp Zama youth swims with a bottle-nosed dolphin June 11 in the waters off the coast of Mikura Island, Japan, as part of a free youth trip offered by the Camp Zama Youth Center. (Courtesy of U.S. Army)

A Camp Zama youth swims with a bottle-nosed dolphin June 11 in the waters off the coast of Mikura Island, Japan, as part of a free youth trip offered by the Camp Zama Youth Center. (Courtesy of U.S. Army) 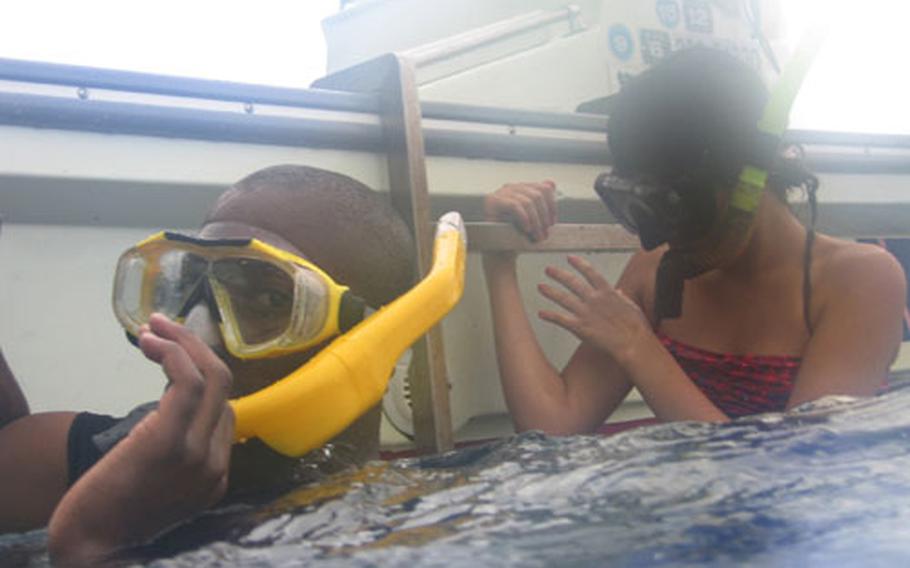 Robert Chance, Camp Zama Youth Center youth program assistant, adjusts his snorkel as he prepares to enter the waters off the coast of Mikura Island, Japan, with a youth from Camp Zama to swim with a school of bottle-nosed dolphins June 11. Chance and 19 youths were on the island for three days to participate in a cultural exchange program with Mikura&#39;s youths during which students studied dolphin communication and behavior. (Courtesy of U.S. Army)

CAMP ZAMA, Japan &#8212; Nearly 20 youngsters got a close-up look at dolphins through a hands-on learning project sponsored by the Youth Center.

The Dolphin Communication Project was created to help teach science by allowing youngsters to swim and interact with dolphins living near an island seven hours away from Tokyo by ferry.

The program is the brainchild of scientist Kathleen Dudzinski, who has researched dolphins at Mikura Island and around the world.

In the past few years, Dudzinski has offered educational programs for children to introduce them to science. The Zama tour was planned after Dudzinski contacted the Hawaii office of the Boys and Girls Club of America, which has strong ties to Zama&#8217;s Youth Center, to plan an educational trip, said Robert Chance, the Youth Center program assistant.

When Dudzinski visited Mikura Island this year, she invited youngsters from Zama&#8217;s Youth Center to participate.

The weekend trip originally was planned for 15 kids, but due to heavy demand, organizers managed to squeeze in an extra four, Chance said.

They left Zama late on June 10 and spent several days learning about science. On Friday, the group piled into boats and floated around the island, jumping in whenever a pod of dolphins materialized.

The next day, Dudzinski offered a workshop on dolphins and their communication. The group spent the rest of their time interacting with the island&#8217;s small population, including a group of children. They had a cookout, hiked and hung out in the island&#8217;s community center.

But, the youngsters agree, the best part was seeing the dolphins.

The dolphins circled the students, checking them out.

The kids were not allowed to touch the dolphins, who nudged and playfully bit each other and stirred up everything they encountered.

The dolphins were very interested in the swimmers and the clicking sounds from underwater camera shutters, he said.

The experience was fun but also a little scary for a few.

Tessa Presley, 13, was a bit apprehensive about using a snorkel and coming so close to wild animals.

The lectures the second day helped identify many of the experiences the students had in the water. The group also spotted other marine creatures, such as sea turtles, jumping fish and crabs.

The dolphins, according to the now-knowledgeable participants, were 8- or 9-foot bottlenose and spotted dolphins.

The experience convinced many of them that science is fun and encouraged more than a few to keep marine biology in mind for a career aspiration &#8212; the goal of the project, according to its organizers.

Presley hoped to study dolphins as a marine biologist someday.

Holly Benton, 13, decided science is pretty cool after all.

The trip was paid for by the Youth Center, which hopes to continue the program next year. For information, call the center at DSN 263-4500. For information about the project, visit: www.dolphincommunicationproject.org.