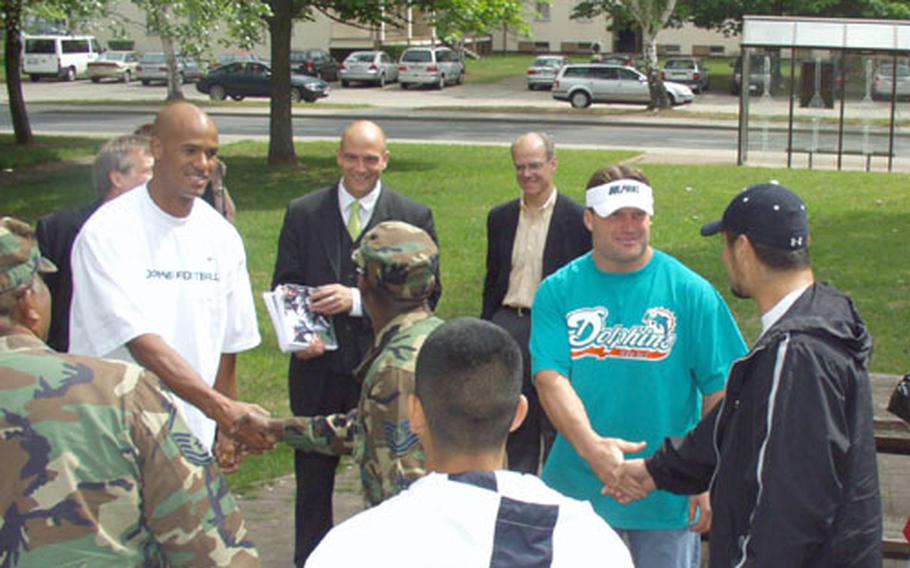 Miami Dolphins defensive end Jason Taylor and linebacker Zach Thomas are visiting troops and family members in Germany during a trip sponsored by the USO and the NFL.

Their trip began Thursday with a visit to the American Forces Network studios and a tour of Rhein-Main Air Base. On Friday, the football players spent the day in the Kaiserslautern community, including a stop at Landstuhl Regional Medical Center.

They will be in Heidelberg from 11 a.m. to 2 p.m. Saturday at the bowling center on Patrick Henry Village. On Saturday night, they will attend the Frankfurt Galaxy football game in Frankfurt.

Taylor, one of the best ends in the game, led the NFL in sacks last year. He uses his hands well and counters the strength of bigger players with sound technique.

Even though the troops may see Thomas as a hero, Thomas said what he does is nothing compared with the sacrifices the military makes on a daily basis.

Both players signed free USO pictures, as well as personal memorabilia including Dolphins sweatshirts and footballs. Also, between discussing football techniques and workout regimens, they posed for pictures.

Not only are these two teammates, but they also are brothers-in-law. Taylor married Thomas&#8217;s sister, Katina.