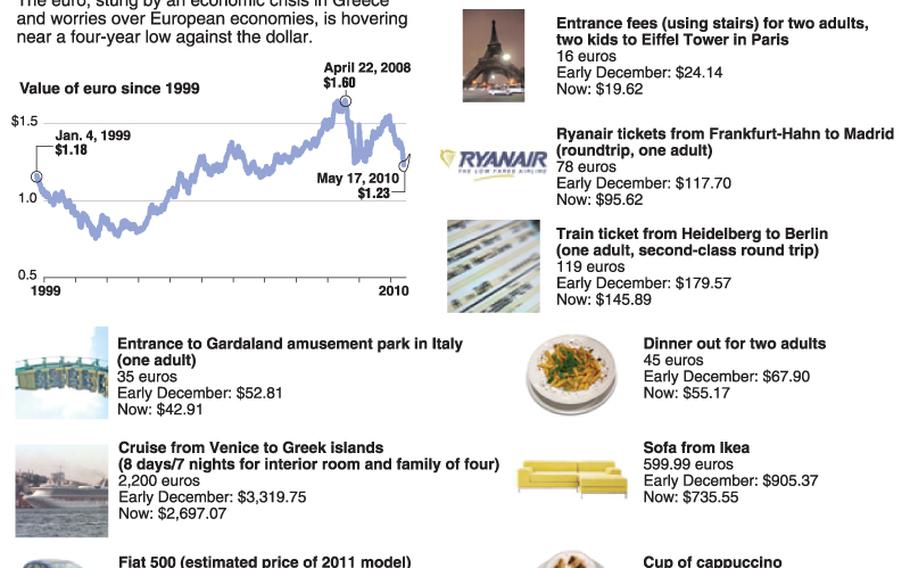 Ongoing worries about Europe&rsquo;s financial health could be a good thing for Americans planning vacations around the Continent this summer.

The U.S. dollar reached a four-year high against the euro last week and continued to hover around $1.22 in Europe this week.

Though it might not be noticeable in small purchases, the difference in the exchange rate is evident, even on a weekend getaway. A 100-euro hotel room that would have cost $151 in early December is now $122. Even those enjoying dinner will be saving a little cash: a 45-euro dinner bill meant paying nearly $68 six months ago, but now costs about $55.

Europe&rsquo;s 16-nation currency has dropped more than 8 percent this year against the dollar over fears of rising government budget deficits.

&ldquo;It&rsquo;s a good thing for those with vacations,&rdquo; said Col. Darrell Brimberry, comptroller for the U.S. European Command.

But it&rsquo;s not so good for those planning to spend most of their time and money on base. The post allowance rate that U.S. civilians workers receive declined earlier this week, and the troops&rsquo; Cost of Living Allowance is likely next.

&ldquo;Over time as the dollar is strengthening &hellip; members can expect their allowances will be reduced,&rdquo; said Roy Sammarco, chief of the allowances branch at the Defense Travel Management Office.

But those who spend most of their money on base shouldn&rsquo;t feel cheated if their allowances shrink, Sammarco said. COLA is designed to help offset the costs of certain goods bought overseas, not for purchases made on base.

Because of off-base shopping habits and prices, troops stationed in Italy currently receive substantially higher allowances than those in Germany and England. An E-5 with six years&rsquo; service and three dependents in Naples receives $412 in COLA per paycheck, compared to $232 in Heidelberg and $258 at RAF Lakenheath.

While lower cost-of-living rates are not necessarily seen as good news for troops and U.S. workers, a stronger dollar does save the U.S. government money, according to Brimberry.

The government saves on factors such as COLA, rent payments, TDYs, local national salaries, fuels and local supplies, according to Maj. Michael Stuber, who is currently managing the EUCOM budget.

But, Brimberry said, military budgets were set at the start of the fiscal year in October using a rate of .7737 euros for each dollar, and the euro was stronger than that for the first seven months of the fiscal year. The dollar didn&rsquo;t reach that level until the first part of May, so even if the rate stays favorable through the rest of the fiscal year, commands might still lose money on the exchange rate, he said.

For more information on COLA rates, go to: www.defensetravel.dod.mil/perdiem/allowcol.html.