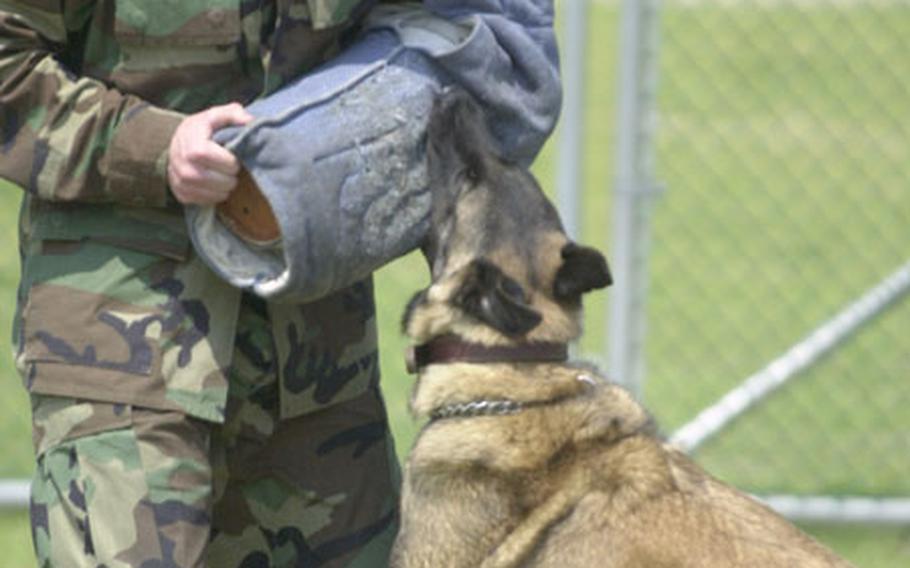 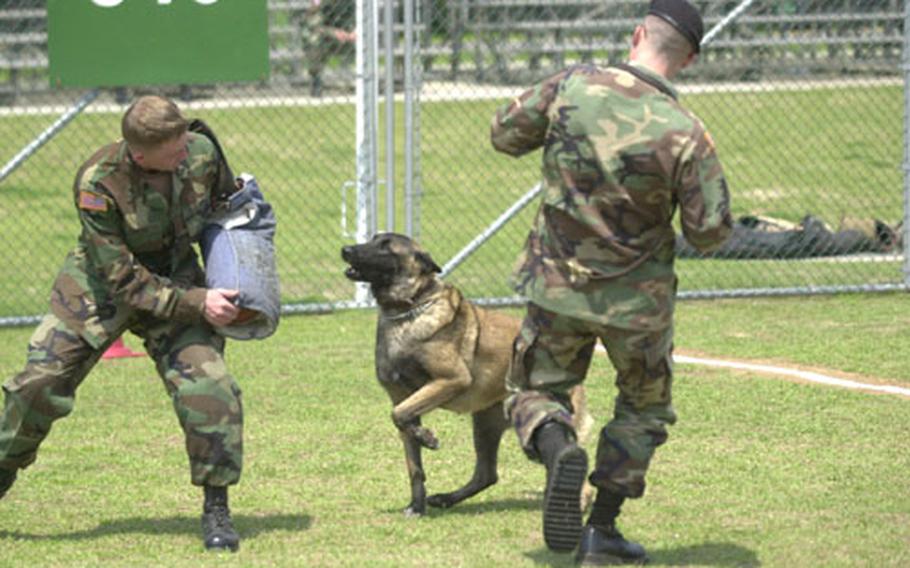 YONGSAN GARRISON, South Korea &#8212; Sgt. Antonio Rivera of the 728th Military Police Battalion knows what it&#8217;s like to be on both ends of a barking, biting military working dog.

As an explosives patrol dog handler, he put his partner, Nero, though the paces of a bomb detection drill. Then, as a &#8220;decoy,&#8221; he was on the business end of Monzo, a military working dog completing a standoff and bite drill.

&#8220;It&#8217;s still intimidating, kind of scary to see the dog run at you,&#8221; he said Wednesday during a break from the first of what officials hope will become the annual U.S. Forces Korea Military Working Dog Competition.

Rivera and his canine were among 10 teams competing this week in the competition, which included eight U.S. military teams and two South Korean customs and police teams.

Over four days, the teams competed in various specialties such as narcotics and explosives detection in buildings and vehicles, endurance and fitness tests, obedience checks and &#8220;controlled aggression.&#8221;

Winners were to be announced Thursday evening.

Controlled aggression showcased how handlers can turn their dogs loose on a suspect, then either order them to bite or simply create a standoff. It is the &#8220;bread and butter&#8221; of the military working dog, officials said.

&#8220;That&#8217;s the show-stopper. That&#8217;s what everyone wants to see. And it&#8217;s the most exciting for the dog also, because they get to get off the leash and run,&#8221; said Staff Sgt. Michael Billo, the noncommissioned officer in charge of the Yongsan Garrison military working dog kennels.

From drug-sniffing dogs on the U.S. borders to bomb-sniffing dogs in Iraq and patrol dogs in South Korea, thousands of canines are put to use by the military. Dogs and handlers all are trained at Lackland Air Force Base, Texas.

Military working dogs go through a complete physical every six months, officials said, and the average lifespan has increased from about eight years to 11 years. And when the dogs reach the end of their service lives, a new law allows the dogs to be put up for adoption.